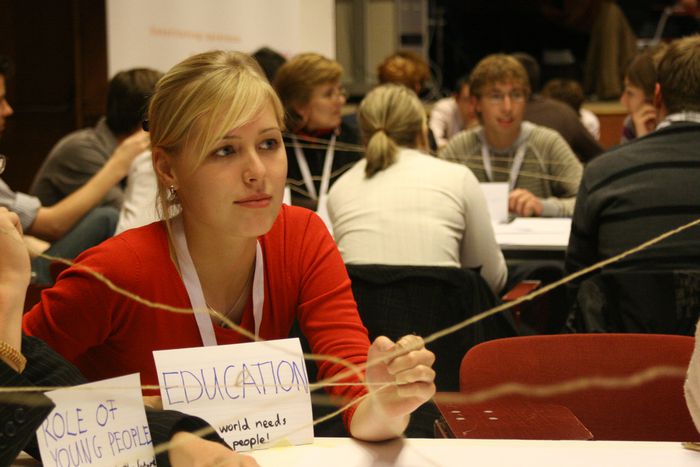 The first edition of European science parliament, held in Aachen between 8 - 10 October, dismissed the ‘Aachen Declaration’, a European policy calling for the organisation of a lasting power supply

I sit at a table with nine other people in the chamber of the RWTH (Rhein-Westfalen Technical College) in Aachen, with a piece of string in my hand. A student from Krnov in the Czech Republic sits next to me, a professor from Athens is opposite me and diagonally opposite is a teacher from the city of Czestochowa in southern Poland. I am preparing ‘Individual Responsibility’, trying to combine it with topics such as ‘economy’, ‘society’ and ‘geography and politics’. At the end I pass the discussion on to the Greeks from the ‘technology’ group.

The day before, I had visited the new student information centre SuperC in Aachen. In the past they had drilled 2.5 kilometres into the ground, in order to use the temperature of the deep layer (that goes up to 80 °C) to heat the building. This is an innovative example for the use of geothermal energy. The pipes are not yet attached, but the model is convincing in its simplicity. Private eco-houses can be heated in the same way, but they only require bores of fifty to one hundred metres.

As a source of future energy, hydrogen is easily stored and is suitable for fuel for vehicles, as well as for heating or for generation of electricity. Water results from the reaction with oxygen, so that a hydrogen car drives not only soundlessly, but also emission-free.

Wave and tide energy is another naturally occurring energy source. There is a tidal power station, for example, which has been using the Tide hub to produce power in the French gulf of St Malo since 1966.

The power of rivers: Take the case of the good old watermill, where the energy from running water can be converted into usable energy. After it has been used, the water is naturally returned to its natural course.

Inexhaustible solar energy can be also be used in a different way on the ground. There are a range of initiatives, such as heating up processing water in buildings, swimming pools or heating buildings alone.

Electricity can be produced through the bundling of solar energy. In 2007, the southern Spanish city of Seville opened the PS10, Europe’s first commercial, solar thermal power station. Using 600 mobile mirrors, the sunbeams are bundled at the top of a 115m high tower that houses a photon detector and a steam turbine.

In photovaltaics, silicon panels convert sunlight directly into electricity. The solar cell market is at present in Europe one of the fastest growing markets.

Bio energy groups together biomass, biogas and bio fuels, all made out of different organic substances. The Agropti gas project in the Swedish Västerås is an initiative which functions as model for the whole of Europe. Biogas is made from energy plants and household waste. Factories make the biogas suitable for motor vehicles to supply gas stations for buses and cars and store silages. The biological gas facility relies on a lasting interaction between city and country.

Wind energy continues to be developed in Europe. There are already numerous on- and offshore wind farms, in which ashore and along the coast wind power is produced.

Last but not least, electricity can be drawn from human muscle power. The British designer Xavier Unwin has developed the OHM accumulator, a combination of battery and the charger. Magnets are attached on the spokes of his bicycle, providing electrical induction for power, which is fed into the accumulator. It takes only forty-five minutes of pedalling to make enough electricity to charge mobile phone. The idea has a good chance of being realised!

A network of different aspects

At the end of the discussion in the chamber in Aachen, not only all members of our table connected with each other, but the connection reaches the next table and finally links almost the whole chamber. With the discussion of as broad a topic as ‘energy’ in the long run, the most diverse ranges are connected with one another. If only one member at the table moves the finger, the whole network of strings moves too.