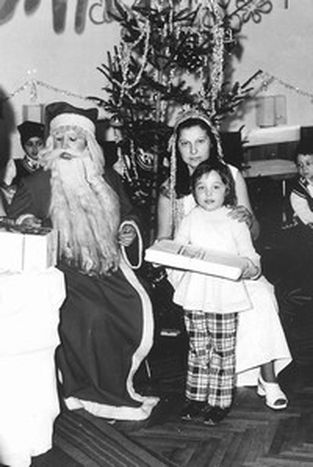 Not always a ‘Silent Night’

Under communism, churches in the Eastern Bloc were empty at Christmas time. However, this did not prevent people from celebrating at home, where many traditions were kept up.

When it came to suppressing religion, the communists were highly inventive. Stalin wanted to banish the Christian figure of St. Nicholas from his dominium, so the Apparatchiks resurrected Russia’s 19th century answer to the Catholic St Nicholas, Ded Moroz (Father Frost). Christmas celebrations were pushed back to New Year’s Eve, when Ded Moroz, accompanied by the young Snegurochka (little snowflake), would bring presents for every child.

Citizens of the former Eastern bloc countries were supposedly free to practise their own religions according to the constitution of the socialist country in which they lived. The reality however, was a little different. Religious Studies had already been taken out of the Curriculum in the 1950s and religion was the ‘opium of the masses’ according to Marxists and Leninists. The totalitarian regimes in all socialist states put an enormous amount of pressure on the Church and, although Church attendance was not officially banned, many Christians did not want to endanger their children’s futures and so did not openly display their beliefs.

Oppression left its mark. Diana Schieck, a historian of East Germany (GDR), tells stories of her Christmas experiences in East Germany. “Christmas markets without Baby Jesus or angels just seemed like ordinary fairgrounds.” The supply of household goods was also vastly lacking: candles, toys and luxury foods were seldom available. GDR citizens with relatives in the West could count themselves lucky as they were able to receive parcels of coffee beans and milk chocolate. “The afternoon of 24 December was a holiday” says Schieck. “On this day, there were usually little sausages with potato salad. We sang traditional songs such as O, du fröhliche (Oh, Glorious Christmas time), and Stille Nacht (Silent Night); the works of the state-commissioned composers under Walter Ulbricht didn’t reach the population at all. Diana Schieck also remembers the fruit that could only be bought around Christmas time: bananas, a kilogram of which each family obtained, and the yellow Cuban oranges which had more pith than juice. And the presents? “Children usually received dolls, handmade toys or Red Indian costumes”, recalls the historian. “It was a very traditional and happy celebration.”

In Bulgaria, people also held onto their Christmas customs. Father Stojan, the 72-year-old priest of the orthodox church The Holy Georgi in Dobrich, remembers, “Bulgarians worked on Christmas Eve and then everyone met up at home in the evening. Like Russians, Serbs and Romanians, who celebrate 13 days later according to the Julian calendar, Bulgarians eat seven small meatless dishes on Christmas Eve and sing Christmas songs. They celebrated like this in socialist times too, tacitly and in the family only.”

Disturbances during the ‘silent night’

Eastern Bloc citizens, however, were not always granted a peaceful Christmas celebration. The Christmas of 1981 in Poland was particularly grim. The recession remained in force and the shops were empty. The Soviet Union exercised increasing pressure on the head of state, Wojciech Jaruzelski, who on 13 December enforced Martial Law. Trade unions were banned again and many activists under Lech Walesa, the Solidarity trade union movement’s leader, were put in prison. Other Eastern bloc countries organised Christmas parcels for Polish children and food deliveries for the Poles with military precision.

The dominant powers in the former Eastern bloc regularly tried to stop Christmas from being celebrated in church. “Only old women, and not many of them, came to the Christmas service” tells Father Stojan. “More people, however, would come to the Easter service and then the Volksmiliz [police] would come in”, confirms Nikola Vassilev, who served in the Bulgarian Volksmiliz. He was an officer in charge of part of the town Veliko Tarnovo. “Just before Christmas we were given the order to round up in a lorry all Koledari [people who, according to the Slav tradition, went from house to house singing ancient Christmas carols].” The Koledari were not punished excessively. According to Vassilev, “they spent an hour remanded in custody to ‘think about what they had done’ and were then free to go home.”

Things began to change in 1989, when communism began collapsing. In Romania, just before Christmas 1989, there was an uprising where workers and even the educated sectors dared to demonstrate against the government, first in Temesvar and later in Bucharest. The dictator Nicolae Ceausescu sent his guardsmen, who shot at women and children as well as the men. However, the army struck out on the side of the protestors. They took the buildings of the state television by assault and televised the uprising live over a couple of days on Romanian and Bulgarian television. The dictator and his wife were tried by a Romanian special tribunal and put to death – on Christmas day, 1989.