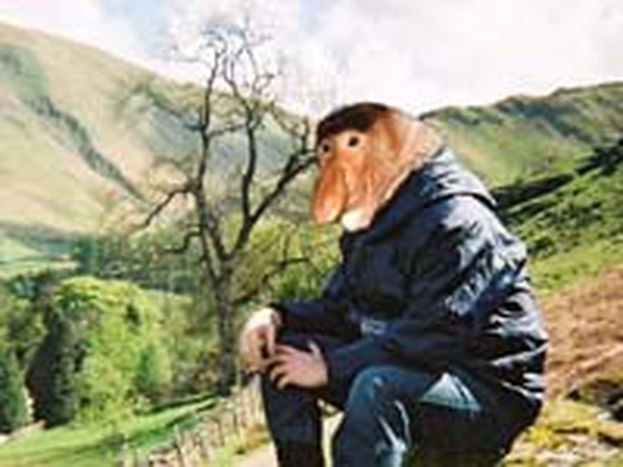 Bloggers are people who spend their lives in front of greasy computer screens in dark basement rooms – constantly on the web, soaking up news, churning out postings. Or so the stereotype goes.

Clive Matthews is a blogger. He runs the hugely successful Europhobia blog, a take on Anglo-European politics and one of the few pro-European English blogs around. The blogosphere knows him as Nosemonkey.

I meet Clive in a West London pub for lunch, and he immediately overthrows the stereotype. “Bloggers aren’t what you expect them to be. The image of the guy with glasses who is 40 and still lives with his parents is not true. Most bloggers I met are just not like that at all. They all have full-time jobs and families.”

Clive, 27, fits the bill. He is married and a staff writer for a history and travel magazine, where he works from Monday to Friday. Brainy he seems – and his habit of chain-smoking self-rolled cigarettes strangely adds to that image – but a screen-addicted geek he certainly isn’t.

“Blogging is a hobby,” he says, taking a sip from his Cornish Ale. “I spend an hour a day on it, sometimes just half an hour. There’s a lot of dead time at work because our magazine only comes out every two months. I use that for my blogging, and do the rest at home.”

From writing practise to blogging success

Europhobia has become a huge success: the blog attracts 500 unique visitors a day, more than 500 websites link to it and newspapers such as The Guardian frequently cite it. Newsweek magazine called it “always excellent”, the European Voice “intriguing and well written”, and the BBC found it “great and even-handed”, while a number of Web Awards graze the site.

All that is a far cry from what Clive expected when he started off three years ago. “I just fell into the blogging, really,” he says. After studying history at London’s UCL, he started in film, and then became a freelance writer. Keen to get into political writing and looking for some intellectual simulation, he found blogs, which seemed to provide an opportunity to combine both. “Most of all, I wanted to get writing practice,” he says.

“When I started there wasn’t much political blogging out there at all. Most blogs were just stupid, jokey things,” he said. A self-declared Euro-sceptic turned pro-European he set out to highlight some of the non-sensical Euro-sceptic arguments. “I just pasted together a couple of pages, but when I found out that Europhobia was linked to by a couple of people I thought I might as well carry on,” he says. And that’s what he did. Europhobia was born.

Today the blog covers all sorts of aspects of Anglo-European politics, often going beyond that. So, where does the daily inspiration come from? “Simple,” he says. “Anger and irritation. I see an article or a headline, or listen to the radio in the morning, and feel the need to rant. And that’s what blogging is all about: ranting and getting your voice heard. Anger is the one thing that unites all bloggers.”

Being Nosemonkey – for half an hour a day

Like many bloggers, Clive nurtures an online and an offline identity – and tries to keep them separate. “I thought long and hard about putting my name on the thing. If people google-search your name, you don’t necessarily want them to come up with some of the things you’re linked to, especially when you’ve been swearing your head off. It’s tricky.”

Now and again the blogging spills over into his private life. “At times, it turns into an obsession. I keep checking emails and I keep checking what people have posted. That can get a bit annoying. If I haven’t checked my emails for a few days I feel very much out of touch.” Sometimes the blog gets him into arguments with friends or, more seriously, with his Euro-sceptic dad.

Despite Europhobia’s success, Clive has remained down-to-earth, especially when it comes to the influence of blogging. “Blogs do have an impact on the press, certainly in the UK, but politically I don’t think they have a great impact, unless they are picked up by a journalist working for a newspaper,” he says, rolling yet another cigarette.

“Is there time for another pint?” he wonders, but unfortunately there isn’t. For him, it’s back to the office. But if he has some free time this afternoon, he might well turn into Nosemonkey – just for half an hour – and provide Europhobia’s readership with another blogging titbit.

Perhaps something has angered him during the interview.

With Anglo-European politics as his self-imposed topic, Nosemonkey will certainly not run out of things to say any time soon. So, could he stop blogging? “Yeah, probably,” he says, stubbing out his cigarette. “But I would definitely have to find something else to do.”