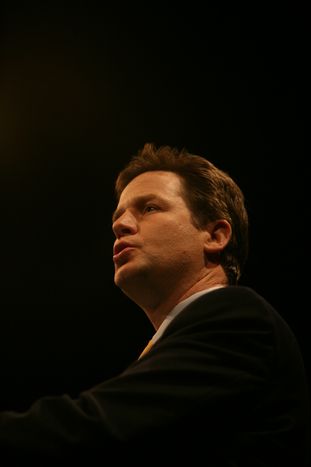 Since 1918 the prime minister of Britain has been either labour or conservative. Red or blue. The 6 May elections were set to be no different. The two-party system seemed safe. Murdoch's papers screamed blue. Until Mr. Nick Clegg, leader of the liberal democrats, entered. The final televised leaders' debate in the UK takes place on 29 April

Commentators brand it ‘Cleggmania’. The Guardian has dubbed him ‘Britain’s Barack Obama’. 'Alternative' UK citizens, feeling powerful after their online campaigning sent Rage Against The Machine to christmas no.1 instead of a reality TV show winner, have a new Facebook campaign: 160, 000 members yell 'we can get the Lib Dems into office!' The rise of the UK minority party has been described as the ‘yellow surge’. The liberal democrats are the euro-savvy newcomers who have blown Britain’s two-horse election race wide open.

Leaders Gordon Brown and David Cameron reached out to French prime minister Nicolas Sarkozy to win his euro-endorsement in March 2010. But it's perhaps Nick Clegg who knows Brussels and how it works best. Pictured alongside Belgian commissioner Karel De Gucht at an ALDE conference

Partisan (Murdoch) press in the UK

Leader Nick Clegg is not the type of man you’d expect to be elected British PM. He also speaks fluent German, French, Spanish and Dutch (from his Dutch mother). He is married to Spanish lawyer Miriam González Durántez, and has three bilingual children, Antonio, Alberto and Miguel. He’s been a ski instructor in Austria, studied at the college of Europe in Bruges and was a Euro MP in the EU parliament until 2004. He's said that Britain could adopt the euro. In short, he’s what cafebabel.com likes to brand as a 'babelian'.

Clegg has said that Britain could adopt the euro

The British newspapers though declared their allegiances early on. The unholy trinity of three Rupert Murdoch-owned dailies - The Sun, The Daily Telegraph and The Daily Mail – were quick to praise conservative leader David Cameron as the man Britain needed to clean up current prime minister Gordon Brown’s mess. It's nothing new. The British press doesn’t even pretend to be impartial. When the conservatives snatched an unexpected victory under John Major in 1994, The Sun ran the now-infamous headline ‘IT’S THE SUN WOT WON IT’. ‘Much of the print press in this country is entirely partisan and always has been,’ wrote former Sun editor David Yelland in The Guardian on 18 April. ‘The Sun deliberately ignored the Lib Dems. The trick is to ally yourself with the winner, win the ear of the prime minister. Why court a powerless party?’

But it’s different this time. 9.4 million watched the first ever American-style live televised debate in the UK between the party leaders on 15 April. Viewers saw all three candidates on an equal platform: David Cameron in his blue tie, Gordon Brown in his red tie and a well-spoken man in a yellow tie, representing a little-known party named the liberal democrats. The next day, 'I agree with Nick Clegg' T-shirts went on sale, sending up the 'I agree with Nick' statements made by Brown and Cameron on the box. The polling result was astounding.

On the debate day, the BBC’s poll tracker put the conservatives in the lead (41%), followed by labour (32%) and the lib dems (18%). Two days later, the lib dems had jumped 12%, overtaking the current labour government. By 18 April, they had overtaken the conservatives. On 21 April, the party that last held power a century ago stood at 34% in the polls, followed by the conservatives (31%) and labour (26%). UK bookmaker Ladbrokes shortened odds on Clegg becoming Britain’s next prime minister from 300-1 to 10-1. In one week. Right about when the right-wing press freaked out. 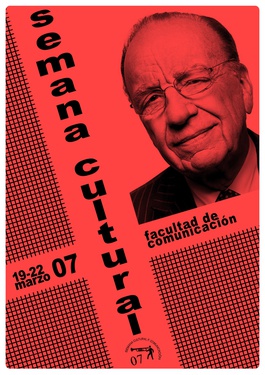 ‘CLEGG IN NAZI SLUR ON BRITAIN’ screamed The Daily Mail. ‘FLIP FLOP WOBBLE DEMOCRAT’ wrote the Sun. ‘Nick Clegg, the lib dem donors and payments into his private account’ insinuated the slightly more sober Daily Telegraph. The Sun had dredged up a 2002 article in which Clegg wrote of his embarrassment as a teenager when, on a school trip to Germany, his classmates insisted on taunting their German exchanges about the war and making nazi salutes. The Daily Telegraph neglected to mention that Clegg had openly declared all of his donations, whether into his private account or not. Reportedly, on the evening of 21 April, Rupert Murdoch’s son James stormed into the offices of the (non-Murdoch) newspaper The Independent and yelled ‘What the fuck are you playing at?’ at the editor Simon Keiler. He accused him of damaging his father’s reputation with their advertising campaign, ‘Rupert Murdoch won’t decide this election. You will.’ ‘Make no mistake,’ wrote Yelland in The Guardian. ‘If the liberal democrats win the election it will be the first time in decades that Murdoch is locked out of British politics.’

Why voters tire of British politics

One reason why voters are fed up is the British ‘first past the post’ electoral system. In 2005, Labour won an absolute majority with 35.3%, the lowest share of the vote for any majority government in the history of the house of commons. More than half of voters voted against their winning MP, but their votes didn’t count. According to the UK-based voter power index, rather than having one vote each, British citizens have, on average, 0.25 votes each! Meanwhile, 'winner takes it all’ has obvious disadvantages for the smaller parties like the liberal democrats. Nick Clegg is campaigning for electoral reform and the introduction of a European-style proportional representation. He might not be made prime minister on 6 May, but if there’s a hung parliament (with no absolute majority), the liberal democrats could be the king makers. They could bargain their votes to whoever will give them the legislation they want. The USA had their change. It looks like British voters want theirs, as much as they wanted their 2009 christmas number one.