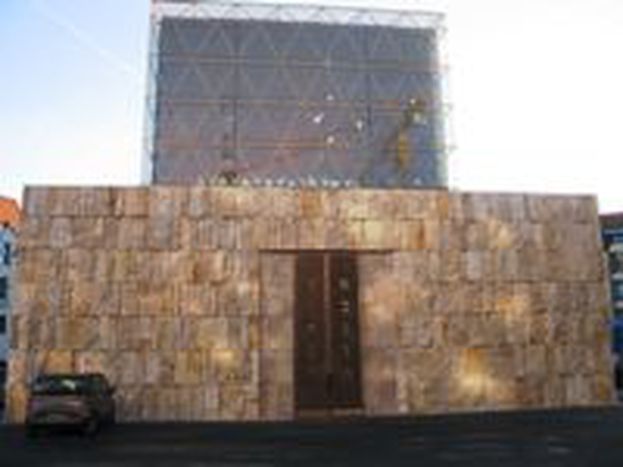 On November 9, the new Central Synagogue in Munich will be inaugurated. But how integrated is the town's Jewish community?

The approach to Munich’s main city centre synagogue could hardly be more impressive. The synagogue lies metres away from the grandiose nineteenth century Staatstheater am Gärtnerplatz, which is fronted by a beautifully kept island of late-blooming flowers and dark luscious grass. But after circumventing the island and walking down the side of the theatre, it is impossible to imagine that the building ahead is a place of worship. Indeed, a starker contrast between the regal-looking theatre and the dirty weather-ridden façade of Munich’s main synagogue is hard to imagine.

The new Ohel Jacob Synagogue and Cultural Centre at Jakobsplatz, will be inaugurated on November 9 and will give the Jewish community in Munich greater visibility and legitimacy. The city’s 9,000 Jews will no longer have to worship in back yard synagogues, hidden away from the rest of the city’s population.

A place to worship

Ellen Presser is head of Munich’s new Youth and Cultural Centre. In a small kosher café near Gärtnerplatz, she explains that the new synagogue and cultural centre symbolise a return to the centre of the city for the Jewish community. “During the twelve years of Nazism all Jewish structures were destroyed. After the Second World War, the only Jewish building left was the current synagogue on Reichenbachstrasse. Because the synagogue is in a backyard the Nazis were not able to destroy it because the surrounding buildings would also have been burned down.”

Ellen says the synagogue will “draw the Jewish community back to the centre of the city – where it was until the summer of 1938, when one synagogue was destroyed on the specific orders of Adolf Hitler, and then the rest on Reichskristallnacht on 9 November later that year.” After the devastation of the Nazi era, Munich’s Jewish community steadily increased to reach around 4000 in the late 1980s. Emigration from former communist countries in Eastern Europe has more than doubled Munich’s Jewish population to over 9,000 today.

The relocation of the Jewish community back to the centre of the city has, however, been far from straight forward. And the Jewish community is far from being peacefully integrated and protected. Shortly before the laying of the foundation stone ceremony for the synagogue in November 2003, a group of right-wing extremists was arrested and accused of plotting to blow up the gathered dignitaries. Members of the group were sentenced in May 2005 to between 2 and 7 years in prison. The plot “was a shock,” admits Ellen. “It was also a shock to the non-Jewish society because a lot of people realized how real the threat was.”

In addition to this well-reported bomb plot, the German neo-Nazi NPD made gains in regional elections in eastern Germany, which is still suffering terrible economic depression. “We cannot deny,” says Ellen, “that the NPD will not only be able to discuss, but also decide, the way regions and governments work. It’s a fact; and it’s terrible. It shows that these people are ready to use democracy to reach their aims.”

In 2005 German police recorded 6,606 crimes by right-wing extremists; in the first eight months of 2006 the figure had already reached a record 8,000. This prompted Charlotte Knobloch, President of the Central Council of German Jews, to warn on 24 October this year that “anti-semitic and right-wing attacks have reached a conspicuousness and aggressiveness that is reminiscent of 1933” – the year the Nazis took power in Germany.

Munich, a haven of tolerance

But Ellen believes Munich is different. “I believe there is a difference between the north and the south of Germany. The city of Munich is, of course, socialist. But the state of Bavaria is very conservative and this means that the right wing is relatively weak. On the other hand we can’t close our eyes to the fact that three years ago neo-Nazis were prepared to plant bombs which would have killed hundreds of people – and not only Jews. Many important German leaders attended the laying of the foundation stone.”

And did the bomb plot raise doubts about building such a conspicuous new Jewish synagogue and cultural centre in the city centre? “We can live in peace,” answers Ellen passionately. And of course, that’s the point. Why should a settled and integrated part of Munich’s community hide itself away on the periphery of city life? “The Jewish minority and the non-Jewish environment share a lot,” says Ellen. “We are no longer in the 16th or 17th century when Jews lived in ghettos. This very café welcomes many people who are not Jewish, some guest don’t even register that it’s a Jewish café at all. It’s just like every other café. We are more confident now and seek true partners here in Munich.”

Few would doubt that 68 years after Reichskristallnacht and also decades of worshipping in backyard synagogues, the Jewish community is back where it belongs: in the heart of Munich.

Read the chronology of the 9th November