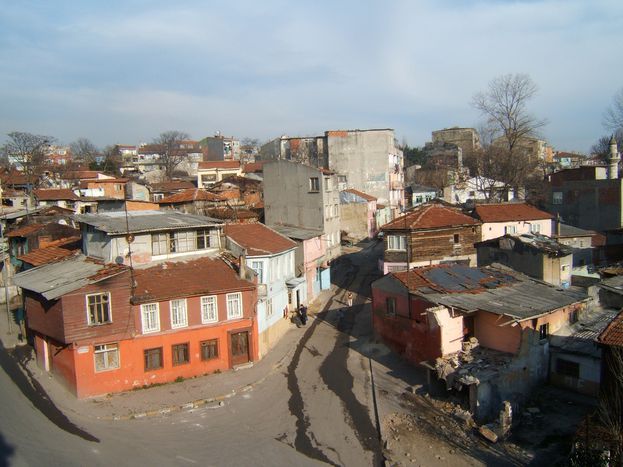 Eagerness and curiosity were the two exact words that suddenly came into my mind when I decided to go to Sulukule- the Roma district in the buffer zone near the land walls of Istanbul’s historical peninsula.

Along with the my personal hesitation which derived from going to a new place which I have never visited before, my anxious parents and friends who had gave up to persuade me for not to going ‘there’, had already prepared a ‘security list’ for me and they pleasantly added that thanks to the great efforts of the Istanbul Metropolitan Municipality, we should no longer feel this kind of discomfort and there will be no need for arranging such a list after the urban transformation in Sulukule: • Don’t stay so late • Don’t show your jewelry, mobile phone or camera to anybody in ‘there’ • Don’t act as if you are stranger in ‘there’

Even though I gave a promise to compliance to my ‘To-Don’t-List’ and put a very mitigating ‘Ok!’s beside each of the warning-points, I began to think about what’s ‘really’ going on in Sulukule: Why should I feel this threat now? What’s the real purpose of the mentality which instigates this anxiety and its discourse which makes Sulukule as ‘there’, Romas as ‘those people’ and Gypsie culture as ‘Other’, while ‘cleaning’ the Sulukule settlement from Roma people and compelling them to live in the peripheries of the city centre?

What the ‘throwing away to urban ghettos’ really means for Roman people? With the help of which particular strategies and tactics of neoliberal statecraft; security, division and citizenship can be attached to each other when we think about urban discourse. With using which tools this discourse can have a chance to legitimize itself? And how the novel technologies of the neoliberalization employ urban governance in order to create new patterns of socio-spatial segregation in the city? Since the ‘city’ has became the unique place in which people organize their relations and identify themselves, create a space to generate their identities; on the one-hand, urbanism and urban planning strategies are the key institutional tools in order to organize divided socio-spatial communities whose social, economic, cultural and symbolic differences have been broadened by neoliberal policies, on the other-hand, the projects such as urban transformation and regeneration in Istanbul act not only as a devise of the control of the population but also as a hegemonic mechanism to ‘ennoble’ particular regions through the gentrification of poors’ houses. For this purposes, in Sulukule, demolitions and reconstructions in the most major two districts so-called Neslisah and Hatice Sultan neighborhoods, where Roma population have been in Istanbul for centuries, started in 2005 with the full agreement of Metropolitan Municipality of Istanbul (IBB), District Municipality of Fatih and TOKI (Housing Development Administration of Turkey).

Beneath the surface, this agreement, in fact, can be best evaluated as a well-organized, pure manifestation for justification of forcing Roma people to displacement and migration, locating them 40 kilometres outside the city (Gaziosmanpasa-Tasoluk) wherein they will oblige to hide their ethnic and cultural identity and to burden with high debt that they will never be able to pay. , it can be said that after the demolition in Sulukule, the Roma people will lose not only their house, but also their subsistence level which is necessary in order to maintain their lives. Because, historically their means of subsistence have been derived from the quotidian works such as fortune-telling, selling flower, playing an instrument in local weddings which are not suitable to practice outside the city-centre and additionally they cannot receive the benefit from any social security systems. Particularly, in Sulukule, the economic immiseration have dramatically increased in the 1990s, closing down all places of entertainment by the judgment of local ministers under the claim that public order might have been damaged. At this stage, we can say that the basic neoliberal premise of market-driven growth achieves its goal not only by excluding subaltern groups from the process of economic production, but also by reducing the welfare state’s primary responsibility which is essential for the sake of its citizens.

Moreover, the legitimation for the urban transformation in Sulukule can be operated by multistranded forms. One the one hand, the mechanism of justification uses a-historical, ill-(in)formed instructions to create the public contentment about the issue. Fatih Municipality Mayor Mustafa Demir states, “Once upon a time gentlemen were living in Sulukule whereas it is the living area of occupiers now.” Yet, it must be said that this kind of discourse not only distort the reality that Roma people have lived in Sulukule for more than 950 years and they have their title deeds which prove that they are property owner in this Roma settlement; but also juxtaposing the Gypsie culture with the ‘occupier’ image in order to address to “common sense” prejudices of public understanding. Such views are cultivated through a combination of personal experience, anectodal evidence, social-service remedies, and popular-culture representations about homeless people. As a result, people come to ‘know’ homeless people as deviant. This ‘deviancy’ discourse has been mostly demonstrated in the mass-media. TOKI President Erdogan Bayraktar accuses of the opponents of the project such as non-governmental organizations, universities, professional chambers, local authorities, Sulukule Platform and even the international agreements preventing the possible dissident voice and says,” Those who oppose to the urban transformation projects are illegal people who have natural, inborn tendency for prostitution and smuggling.” On the other side of the legitimation strategy is mostly held by supervisors and architects who are responsible for the project. Despite of the fact that official title of the project is the “Renovation Project of Hatice Sultan and Neslişah Sultan Districts”, they mostly use the “Renovation Project of Sulukule”, supposedly intended to appeal common prejudice about Gypsies. Along with this, local administers create an illusion in the mass-media by using discursive language and they represented the Sulukule Urban Regeneration Project as if it was a participatory, transparent, democratic and mutually-agreed one. Therefore, in Sulukule Urban Tranformation Project, one of the most severe problem is that, contrary to the statements of municipalities and TOKI, the process of renovation project was conducted without any participation of local people and they have not been informed about any housing programme. This not only harms their domestic privacy realms but also violates to their basic individual rights and freedoms; particularly of social and economic rights such as ‘right to private property’, ‘right to an adequate standard of living’, and also group rights such as ‘equality of opportunity’ and ‘freedom from discrimination’ which are all the responsibility of the state. In this realm, it can be said that the definiton of ‘citizenship’ became problematic in terms of the right to participate in the public sphere and share the urban space, despite the very plural nature of the global ‘metropolitan’ city. Yet, the process became harsher when the many local people refused to abandon their houses. For this reason, The Council of Ministers voted a ‘urgent expropriation’ for the Roma settlement, Sulukule. Although the Sulukule inhabitants introduced an appeal against the vote of expropriation at the administrative tribunal of Istanbul and new tenants of TOKI in Gaziosmanpaşa say that they have difficulty paying their rents, the demolitions were continuing.

Now, on the government side, Sulukule seems like a little ‘hidden catch’ which stains to ‘perfectly depicted landscape’ of Istanbul, the city that is excitedly waiting for the programme of European Capital of Culture 2010. Although the project violates the decrees of the UN Convention for the Safeguarding of the Intangible Cultural Heritage, the Vienna Memorandum, as well as the UNESCO Convention Concerning the Protection of the World Cultural and Natural Heritage, the demolitions continue to be operated for gentrifying Sulukule.