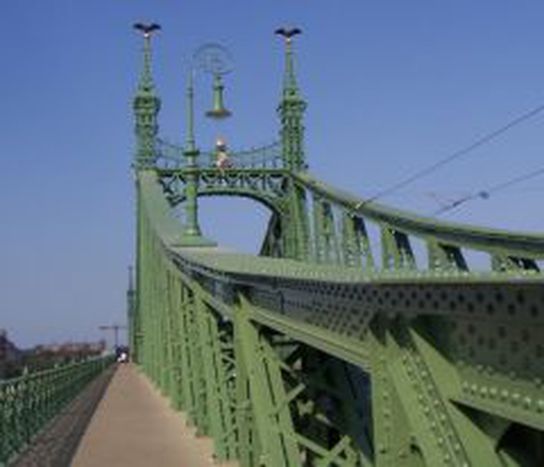 By Judit Révész I have lived in Budapest since I was born, but I have to confess, I had no idea, that one of the World Heritages of Hungary lay so near to me. Budapest, including the Banks of the Danube and the Buda Castle Quarter was one of the first two Hungarian sites to be inscribed, in 1987, on the list of the UNESCO.

The site was extended in 2002, since than the Andrássy Avenue and its historical environment – including the Heroes Square – also belong to the preserved area.

Image: The Liberty Bridge, constructed according to the plans of János Feketeházy (Photo taken by the author)

The area of the cultural World Heritage running along the Danube lies between the Liberty Bridge and the Margaret Bridge, and also includes the Elisabeth Bridge, the Chain Bridge and many buildings on the two sides of the river. For example the Parliament, the building of the Hungarian Academy of Sciences and the Gresham Palace in Pest; Hotel and Spa Gellért, the Gellért Hill and the Castle Quarter with the Matthias Church, the Fishermen’s Bastion and the funicular railway in Buda.

The Gellért Hill, which towers 140 meters above the Danube and 235 meters above see level, is today a big park with many kind of trees, from figs, planted in the time of the Ottoman occupation, oaks, almond-trees and lindens to different pines. We can choose our way to the hilltop from a variety of flights of stairs, pavements and paths running beside playgrounds and large fields on the sloping southern side and up on the steep northern side. You can reach the top with car or sightseeing bus too. The Gellért Hill attracts not only those, who love nature and hiking or want to spend some peaceful hours in the open air. There are also sights made by man worth to see.

Image: The Liberation Monument (Photo taken by the author) 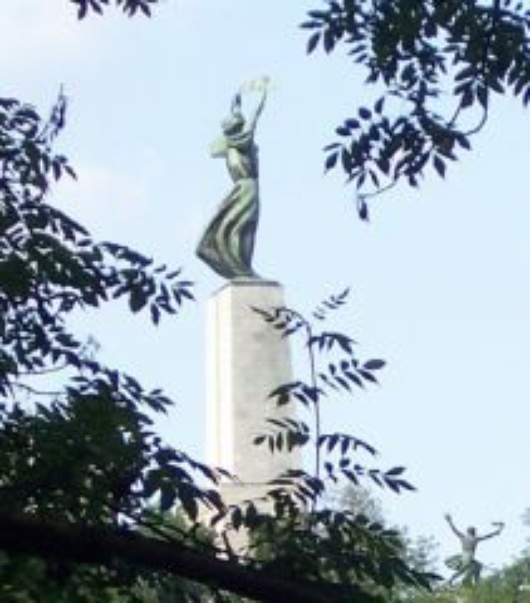 On the northern side there is the statue of Saint Gellért, after whom the hill has been named since the 15th century. He was born in a patrician family in Venice at the end of the 10th century. Saint Stephen, the first king of Hungary appointed him to a bishop and entrusted him with organising a new diocese in Hungary. The bishop was killed and thrown down from the hill by heathen rebels in 1046 and became the first martyr of the country. The statue of Saint Stephen, holding a little temple in his hands, stands on the southern side, in front of the Cave Church. The Church, decorated with stained glasses, plants and bronze sculptures, is open for tourists for a few hours of the day. The hugest monument and maybe the best-known sight of the hill is the 14 meters high Liberation Monument, also called as Statue of Liberty, raised in 1947 on the hilltop. Beside the woman holding up a palm branch there are two smaller figures: a man struggling with a dragon and another with a torch in his hand.

Behind the monument lies the Citadel, the fortress, which was constructed by the Austrians after they had put down Hungary’s fight for freedom in 1848-49. But this original building has never been used for military purposes. One part of it is a hotel today, in the other part there are two exhibitions. One of the exhibitions is about the history of the Gellért Hill. It tells about the eraviscs, a Celtic tribe that lived here in the 1st century BC. About the Romans, who conquered them and constructed watchtowers in the area, because the boundary of the great ancient empire was here along the Danube. We can also read about Saint Gellért or the Ottomans, who occupied Hungary in the 16th-17th century and liked the city because of its many thermal springs. We can learn about the observatory destroyed during the independence war, and about vine growing on the hill, which began in the Middle Ages and came to an end only at the end of the 19th century. 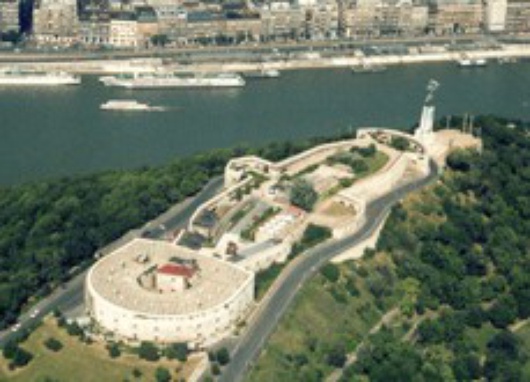 Image: The Citadel, constructed between 1850-54 according to the plans of Emauiel Zitta.

The other exhibition is underground. Or to be more precise, in an underground bunker, built during the World War 2, to be the bomb- and gas-proof air defence fort of the military leadership of Hungary. We can follow the events of the liberation of Budapest, occupied by German forces in spring of 1944, and the consequences of the war – for example plundering of the Soviet soldiers. There are many photographs showing civilians in the air-raid shelter, military leaders, the ruins of the city or dead Jewish children. In some chambers we can see waxworks in SS uniform or dressed as Hungarian military officers. The bunker makes the visitor shiver even without the photos and commentaries: it is like a gloomy, chilly cellar – with 4-5 meters high walls –, iron rods sticking out of the concrete ceiling.

After our journey in the past we can eat or drink something at the walls of the fortress, buy painted ceramics and embroidered tablecloth as souvenirs or simply sit down on a bench and watch the city: here on the top of the Gellért Hill opens up the most amazing view of Budapest I have ever seen. 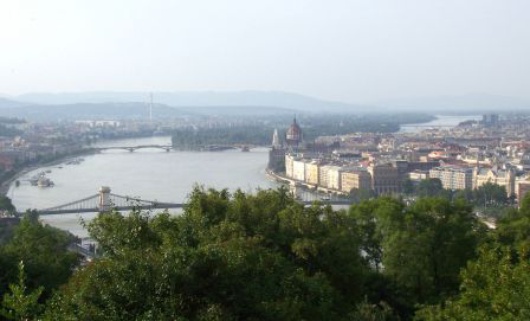 Image: View from the Gellért Hill. The neo-Gothic building of the Hungarian Parliament lies between the Chain Bridge and the Margaret Bridge. (Photo taken by the author)