MyBudapest Photo Project - The city from a new point of view

How does Budapest look like through the lenses of homeless people? How can art be used as a tool to empower people affected by homelessness? And how can a calendar be the key of a successful social initiative? The MyBudapest Photo Project gives an answer to all of these questions.

Budapest from a new point of view

On a gloomy Sunday afternoon we headed to Budapest Pont, an open cultural and community space to catch the last day of the MyBudapest Photo exhibition. However Budapest is a fascinating city, rather were the photographers themselves than the topic, what aroused our interest. The exhibition presented the result of the MyBudapest Photo Project, which aimed to give the possibility for those citizens of the capital who are affected by homelessness to show the city from their point of view. The project was organized by the Budapest Bike Maffia, a group of young bikers who aim to help people in need in cooperation with the London based Café Art. They bought 100 pieces of disposable cameras with the help of FUJIFILM and they asked people who experienced homelessness to capture the city as they see it. During the week of the shooting almost 2000 photos were sent back to the organizers who invited professionals to be the jury and to select around 50 from these images for the exhibition. From these photos 12+1 were chosen based on the public vote to be printed in the MyBudapest 2017 calendar.

The MyBudapest Photo Project joined to an international initiative, which was launched by Café Art in 2012 in London. Café Art was founded by Michael Wong with the aim of connecting people by creating opportunities for them to learn, value and accept each other’s strengths and weaknesses. They chose art as a tool to empower people affected by homelessness and they try to connect them with the wider community through their artworks. Bernadett Fekete, the member of Budapest Bike Maffia and the coordinator of the project tumbled on Café Art and their initiative by accident, and she decided to bring the project to Budapest.

From the idea to the MyBudapest 2017 calendar

Based on the method of Café Art the members of Budapest Bike Maffia and their volunteers visited the homeless shelters of Budapest to talk about the project and the calls were also distributed through the networks of professional organizations supporting people in need. ’We found it really important to involve people experienced homelessness as much as we can, because we wanted them to feel this initiative as their own – explains Bernadett. When we visited them, we highlighted that they can capture anything from the city that they want and they think it is part of their city, let it be a sculpture, a bridge, a friend or a puppy.’ The result was a unique selection of diverse pictures showing many different and sometimes unseen faces of Budapest. At the end 87 cameras were sent back to the organizers and 62 photos were selected by the jury for the exhibition. 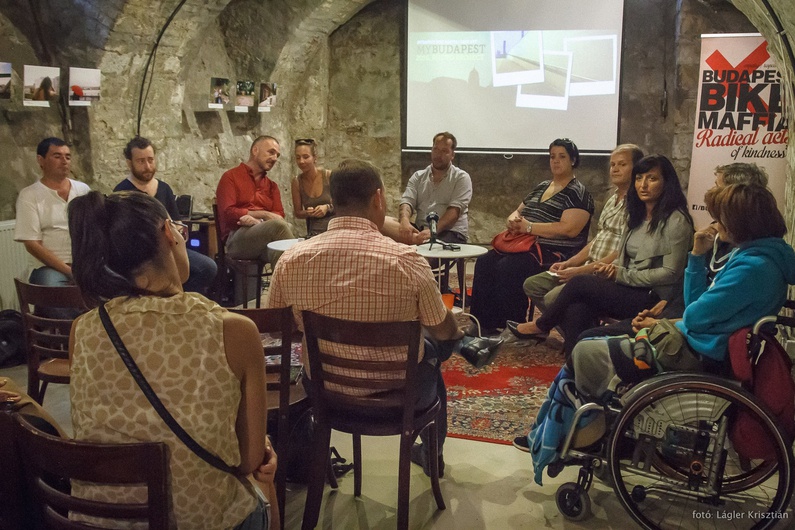 The involvement of the authors did not stop with the opening of the exhibition. The organizers invited them for the press conference of the project and they had the possibility to share their personal stories in frame of ’Meeting with the authors’ events. ’The fact that they had the possibility to speak meant a great value for them – thinks Ádám Harangozó, the program manager of Budapest Point. - They had a forum where they could share their thoughts and people listened to them. And of course they have things to say.’ The financial support that comes with the project means also a lot for the participants. The winners received prize money for their work and two of the participants were invited to take part in a photo course. In addition to this a bicycle was also donated by the Strike Bike.

The calendar will be distributed at the exhibition venues and online. The project participants have also a possibility to take part in the distribution and they will be supported from the income. The Budapest Bike Maffia also plans to share all the received photos on their website and open a web shop where they can be bought for a symbolic price, which would go back to its author.

‘The participants liked the project even more than we expected - tells us Bernadett. They appreciated that for this time they could give something and they belonged to a small group of people.’ Encouraged by the positive feedbacks the team wants to continue the project and organize it next year as well. Learning from the experiences of the first edition they would like to involve more volunteers in the work. ‘Those personal relations that we established during this period meant a lot for us and gave a very good feeling and we would like to share it with more people next year - adds Bernadett.’ They hope that their project will inspire other cities in Hungary as the issue of homelessness effects not only the citizens of the capital, but also the whole country.

We also talked with two of the participants and we asked them about their impressions and feelings of the exhibition:

Ever since my childhood I’ve loved taking pictures. It’s smart that this project has come from London. I think it was an interesting experience for all the participants. From 100 disposable cameras we gave back 87 I think it’s a really good result.

During the week of photography what kind of topics were you interested in? Which topics caught your attention?

We could take pictures about anything that was in Budapest. I really love animals I thought that my animal-themed picture would win. When two dogs are fighting for a piece of wood.

In the end which photography they chose for the exhibition?

They chose The Liget Project picture. 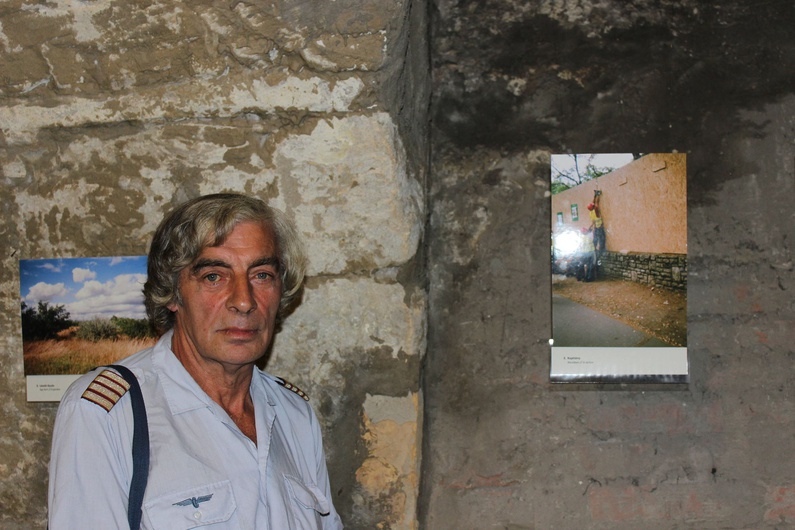 Where do you live now?

I live in Budapest in a homeless shelter and I’m always forced to change places. I live in a small five square meter room where there is a bed and a table.

How can you make a living?

I go to Vienna for plasma donation because in Budapest once I got sick and they banned me. I’m forced to give plasma (I get 35 Euros). I worked all my life but the Hungarian State took away my 22.000 Forints pension.

What did you do before?

For a long time I was a ship captain, I was sailing all over the world. I also built a sailboat on the Danube. I learnt a lot of things, I tried several professions: I worked as a car mechanic, ship engineer and geotechnical laboratory technician.

When did you stop working? And what would you do if you could work again?

I was working as a skipper and they laid off the ship workers. I came home but I didn’t find a job because I’m too old. I don’t know what to do in this country. I just want to get my pension. If I could work again I would get a job on any kind of German ship and I would earn five times more than my Hungarian salary. Young people are going abroad and they do it well.

What were your favorite subjects? What was important for you in Budapest?

At first I didn’t know what kind of photo did I want to take. I didn’t want to make a sociological photo about Budapest. I tried to take pictures about the popular sights in the city. So in the end I took pictures of three famous sights and I put myself in the pictures. In one of the photos I’m in Saint Stephen’s Park lying next to flowers.

What is the story of the picture?

I love nature. I spent half of my life in the nature. I was travelling in Europe for ten years. I didn’t take a tent or any camping equipment with me. I slept where the night found me. I love the flowers, plants, trees and animals. With the picture I would like to show something natural, something connected with life and nature. 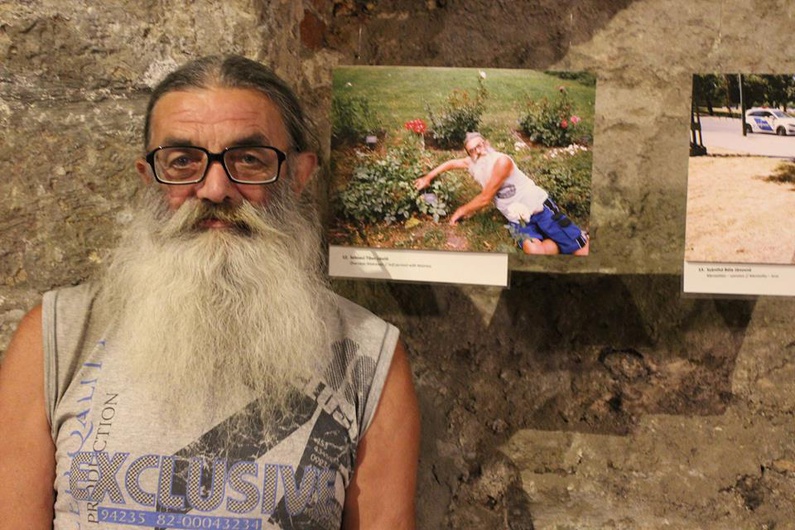 What is your personal life story?

I worked all my life and I learnt several professions: motorcycle mechanic, storekeeper jobs. I’m interested in psychology and medicine and so many other things I can’t even count them. More than once I had property. The last time I lived in a fishing site. I had a car, a small house and a 7 thousand volume private library. One day I decided to sell everything; I bought a tour bike in Csepel, I installed it and I started my trip in 2000. I was travelling for ten years. I started with Spain and then I moved to Italy. First it was quite hard but then I got used to homelessness and I didn’t want a home again.

Do you want to travel somewhere now?

Now I’m waiting for my pension. After I got it I would like to go on a shorter or longer trip to Bulgaria and Poland. I would also like to visit Portugal.

Where do you live now?

I live in a workers shelter in a four-bed dorm. I’m satisfied, I have no problems.

The Budapest Point was the first venue of the travelling exhibition. Starting this week the exhibition will travel to the countryside of Hungary. On the 10th of October, the World Homeless day was the debut of the MyBudapest 2017 calendar at the FUGA Budapest Center for Architecture. If you want to have a look at it, you can find the calendar at FUGA, in the shops of Strike Bike or you can contact the organizers (mybudapestphotoproject@gmail.com).