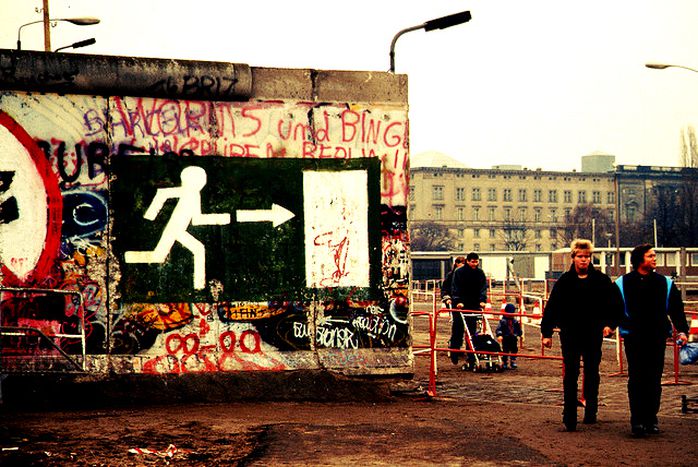 German Reunification - freedom, the triumph of a people, and large emotions. More or less. When talking about the Fall of the Berlin Wall, Germans often like to digress into drama and world history. Most witnessed it, others, on the other hand, didn't. What does the fall of the Berlin Wall mean to young people? And do I have to feel something just because I'm German?

Glaring lights, excavators, faded colors and a jittery Brandenburg Gate at night. Most of us have seen the famous video of the Mauerfall (Fall of the Berlin Wall). While an excavator tears down the concrete, and street lights flicker unrealistically, people from far and wide are pushing and shoving, wearing unusual clothing and mullets. The crowd sways from left to right until finally the first person crawls through a hole in the concrete wall to the other side. The Wall has fallen, an entire nation shouts for joy, and people embrace each other with tears in their eyes. A historic moment, the peaceful end of dictatorship, communism and misanthropy. A new beginning for Germany, a new beginning for all of Europe.

The most important scenes from the Fall. Excavator at 00:45 minutes. Mullets everywhere.

For the anniversary of the Fall of the Berlin Wall, Germany has seen the yearly announcement of pathos contests. Considering the historical scope of November 9th, 1989, this seems to be appropriate. But no matter how eloquent the metaphors are, it simply doesn't seem so right for many young people. I was three years old on the day of the Fall, and accordingly, I cannot remember anything. But I do remember when I first saw the video during history class at school, and how tears began to well up in my eyes. A brief moment of sentimentality, then we carried on with the practical aspects of the Reunification. To be honest, it was the sweaters and unusual hairstyles that left the biggest impression. And over the next ten years, I didn't give the Fall another thought.

The Fall? Not so important

Of course I knew all the facts, had asked my parents to tell me their memories, and understood the connection between the Fall and Michail Gorbatschow's Perestroika policies. It all seemed important, but it did not especially interest me. Caught between France, Asia and Australia, it was difficult enough for me to define how German I actually was. The Fall never played any sort of role in that. Of course many people wanted to talk to me about Germany, but usually it revolved around Hitler. The Holocaust. How I felt about it all as a German. And of course, Berlin. The coolest city in the world! Germany's actually pretty cool, too, if you come to think of it. But the Fall? Not so important. 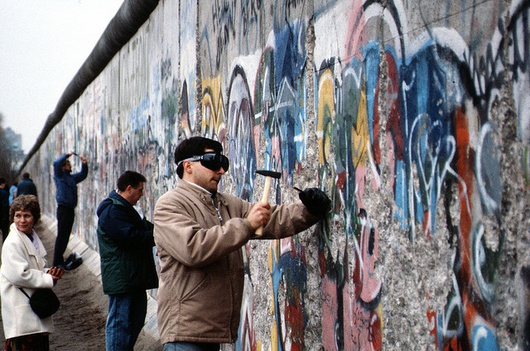 My parents had a lot to say about Reunification, despite having missed the Fall from the farthest reaches of Lower Bavaria. Being "overworked parents with frequent uneasy sleeps," as my father likes to emphasise, there wasn't much time left over to worry about the events of the day. Besides, we did not have a television back then and couldn't watch the jittery Brandenburg Gate surrounded by excavators and mullets. The news on the radio and in the newspapers seemed "unreal" and "fairytale-like." My father can still remember the first euphoric days, the excessive joy of the people that were finally reunited. "And one day there was suddenly a piece of the wall in the old town. For a small donation, you could chisel off a piece as a souvenir." He went and did it, but he doesn't remember where the piece is today. 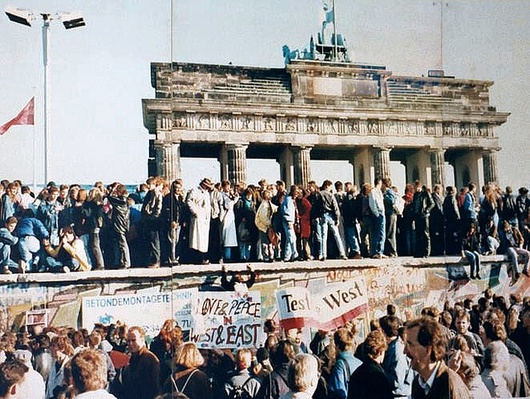 For me, the Fall began to appear just as "unreal" with time. Maybe it's not a coincidence that I came back to Germany and Berlin just in time for the 25th anniversary. As I asked my landlady, who grew up in East Berlin alongside the Wall, about November 9th, 1989, she spent hours telling me stories. How she cried when the borders were opened and finished off a bottle of red wine with her husband. How her son had a fever that evening, keeping them from going to West Berlin until a couple days later. How they were thrilled about the "Begrüßungsgeld" (money given to Easterners as a welcoming gift) and the free transportation. But also how deplorable they found the graffiti and billboards. "For us it was unimaginable. Everything stays the same within a dictatorship. Every slight change is a colossal event." The Fall wasn't just a colossal event, but rather a mega-hyper-colossal event.

Eventually, I watched the video with the jittery excavator at the museum in Bernauer Straße. And suddenly the significance of the event hit me. Since then, I drag all my foreign friends to this part of the Wall, far away from party tourists at the East Side Gallery, and force them to watch the short film about the GDR and the Wall. What I feel each time, I still do not quite know how to interpret it. But the Fall definitely is not unimportant for me anymore. Had it not been for Berlin, this surely would not have happened. But also not without the many people that I've interviewed since them. Precisely because I wasn't present at the Reunification, it has become all that more fascinating. In the end, there aren't that many peaceful revolutions in world history, which revolves almost entirely around wars and catastrophes. 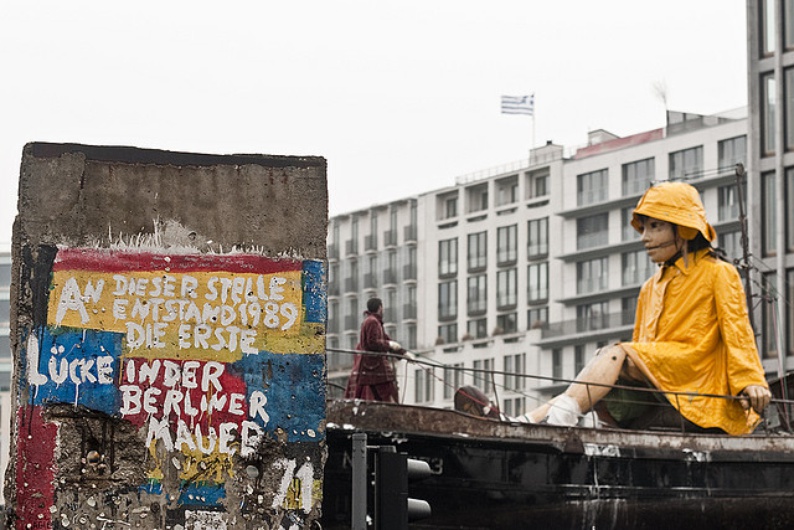 Of course this is not enough for in-depth discussions and commemorative events. Apart from that, I'm not good at pathos. In connection with the Fall, however, it all seems to be justified, even if I consistently get riled up about boring anniversary events and the phoniness of some of the "architects" of the Reunification. Nevertheless, it just doesn't get old to show my friends from England, Australia, India and Italy the jittery Brandenburg Gate with its swirling crowds. The unusual mullets are now just a minor detail. A pretty funny one though.

25 years ago the Iron Curtain fell. Ten years ago, eight post-communist States joined the EU. But what do we really know about our neighbor on the other side of the border? Send your thoughts to berlin(at)cafebabel.com to become a part of the team or reporters!

Translated from My Own Private Mauerfall