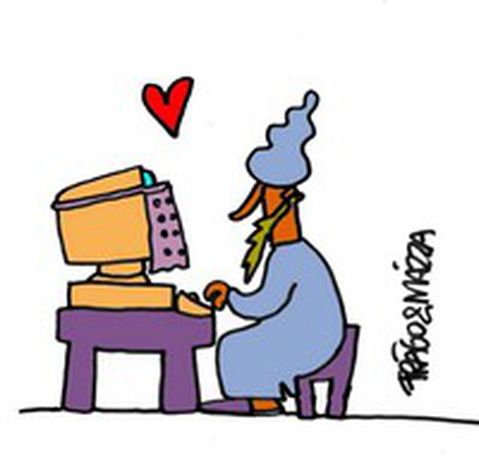 Nora86 has published her profile on MuslimMatch.com, hoping that this exclusively Muslim site will help her find the man of her life. This Roman twenty-year-old Sunni Muslim looks bright and breezy on her photo. Her smile framed by long brown hair beams down at the lens. Aicha, a thirty-one year old living in Spain, is more traditional. Her face is carefully covered with a black veil. These are just some of the users of the many online Muslim marriage agencies. It isn't difficult to sign up. Fill in the details of the registration form: age, family, educational level, profession, skin colour, add a nice photo and the profile is on the web. There's often a fee to pay first though. This can range from $30 (about 23 euros) for three months membership of muslimwedding.org to £25 (about 37 euros) for muslim-marriages.co.uk. What do these agencies offer? Not only the ability to read others' profiles, but also their contact details.

A twist on traditional arranged marriage

This isn't a new phenomenon but it is a growing one. Take a look at the membership figures for muslimmatch.com: 110,000 members, up from 15,000 in 2002 according to The Guardian. How does Islam, a religion many believe is very conservative, allow its faithful to use marriage agencies, and online ones at that? "The Islam has always been compatible with technology," replies Mario Nordio, author of 'Online Muslim marriage agencies' and doctor of history and Asian culture at the University of Venice. "Not only this, but the phenomenon is also related to the ancient tradition of arranged marriages". However, instead of being arranged by families, meetings between the future bride and groom are organised through thanks to the Internet. However, "for some, it's like admitting a personal failure, that out of all the family friends and friends' friends, there is nobody willing to say yes", adds Ali Hassan, founder of the website www.muslim-marriages.co.uk in an interview with 'La Stampa'. This is a view which Nordio does not share. "The immigrant population and Islam in general have been very quick to adapt to new technologies. The sites are linked to web-pages managed by religious experts who give real-time and authoritative advice on the interpretation of the Koran, so many Muslims approve of them".

Why does a young European Muslim to turn to a religious meeting website. "An awful poverb says: 'Wives and oxen from your own land'” Many people want to marry someone of their own kind", explains Nordio. So why don't Christians have as many meeting websites? "In Europe, Islam is a minority religion, so Muslims tend to meet on these sites. But we mustn't forget, European Islam is a very complicated subject. You need to bear in mind differences of nationality and religious stances." To help their users, Muslimwedding.org offers additional services. Its search engine allows you to select offers according to the various denominations of Islam (Sunni, Shi'a, Sufi ...) or to countries of origin. When a new matching profile is added to the database, the website sends out an email or text message.

So what kind of person uses Muslim marriage websites? "Everybody from the fifty-year-old London divorcee to the starry-eyed teenager," replies Nordio. Appearances can be deceptive though. "According to my research, men often manage the 'public relations' of the youngest women on these meeting sites, in keeping with their patriarchal tradition".

If marriage agencies aren’t enough, there are also other ways of finding your dream Muslim partner online. An anonymous author 'Muslimquest' dedicated his blog entirely to his quest for the perfect wife. "Muslim marriages in the West are an ongoing problem. I'm trying to resolve it.”