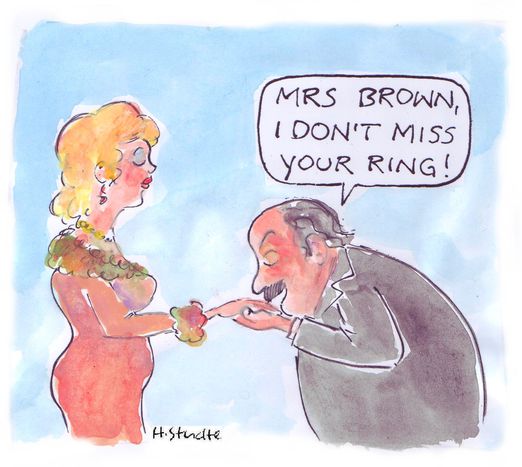 In the run-up to international women's day on 8 March, one of the debates rolling around the cafebabel circles cropped up - when on earth do English-speakers address a woman by Ms?

I'm quizzing my Parisian language class for polite inquiries in English. 'Can I help you missus?' suggests one student. Whilst gently advising that calling someone 'Mrs' without a surname makes one sound like a Dublin street hawker, this is the perfect opportunity to bring up an old debate : 'Miss' (signorina in Italian) is for unmarried women and 'Mrs' (signora in Italian) for married. I've never yet had a class who have guessed the elusive English honorific 'Ms' correctly - another abbreviation for 'mistress'. 'It's for when we don't know if she's married or not,' I say simplistically - or, so you'd think. Frenchman Florian huffs loudly, blowing raspberries out the side of his mouth in disgust; German Sebastian has me walk him through every situation in which you might 'Ms' someone; while French-Saudi Fatima tosses her hair proudly, imperiously nodding her approval at the others - it looks like she'll be Ms to her English-speaking colleagues from now on. For everyone, it's a brand new concept.

On the other side of the coin, as a foreigner in France I still get embarrassed calling a stranger Madame or Mademoiselle - in other words judging both her age and lifestyle-choice before I even know her name. How divorcées get by is beyond me. Yet even in English this is a relatively new term, I explain to my class. For professional women in the 1960s, marital status could often interfere with career prospects, leading many to dump the invasive brands of Mrs and Miss for the more relevant Ms. These days, it is a bastion of the liberal and the politically correct. In Spanish and Polish, the same terms, señorita and panna, have died out more casually, as people shun old fashion and alternate between doña/ señora or pana. In German though, only Frau really exists: the neutral gendered das Fräulein took a ride out with the feminist waves of the 70s, today only being used to talk to little girls or more as pop culture in the latest Tarantino movie. But should other languages follow suit? Class, discuss...