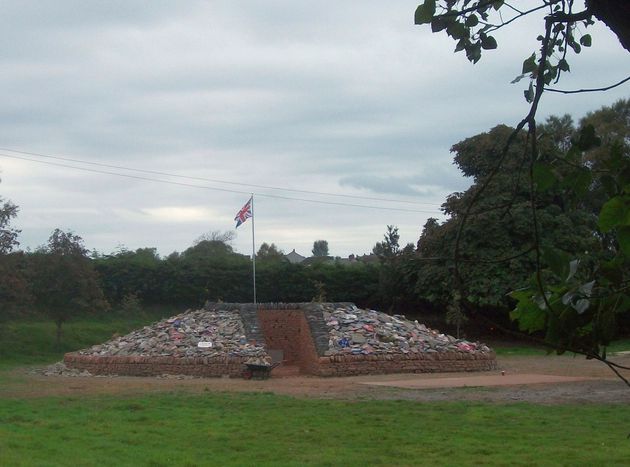 MP who walked across Afghanistan builds a cairn

During the debates and campaigns and political engagement in pre-referendum Scotland, one small movement failed to catch the headlines.

During the debates and campaigns and political engagement in pre-referendum Scotland, one small movement failed to catch the headlines. It was however, mentioned in a two-inch column in The Times in early July. It said that Rory Stewart, MP for Penrith and the Border, intended to build a cairn to symbolize the 'auld acquaintance' – the solidarity between the people of the United Kingdom – and he was looking for volunteers to bring stones, and to help build the cairn.

A farmer offered a site – right on the Scottish-English border. The project began on 20th July 2014, and the cairn was completed before 18th September – the referendum date.  So, despite not arriving with a fanfare of trumpets, or any richly clothed retinue of promises, there is now a very tangible and enduring new monument to the ideals and values of a United Kingdom.

My first visit was on a gloriously warm summer's day near the end of July, just a few days after the building project had started. The cairn then consisted of a low outer ring of terracotta stones, around an empty circular space that was gradually being filled with slate-coloured stones. People were encouraged to bring their own stones, and, if they wanted, to write or paint a message on it. A group of volunteers were involved with spreading the word via leaflets and social media, organizing events, and the actual construction.

At the age of 41 Rory Stewart has already done many different things in his life, (served in the army, worked for an NGO in Afghanistan, diplomat, teacher, writer) but I got to know about him through reading his book The Places in Between, an account of his walk across Afghanistan. I'd also watched the documentaries he made, one about Afghanistan and the second about the Border lands that cover territories in both Scotland and England, digging into the history of this part of our island. And now, in another metamorphosis of identity he has become an MP and came up with the idea of building a cairn on the Scottish/English border.

As I approached the cairn I could see Rory talking to various people – a photographer, then some others wanting advice on the wording of a leaflet. When I saw a tiny chink in the flow of people, I stepped forward, introduced myself and asked if he could spare a few minutes. He was friendly and engaging and immediately pointed to a ridge of ground about 100 metres away, shaded by the spreading branches of a leafy plane tree and suggested that we go there.

We talked about Afghanistan (I travelled overland through Afghanistan in the early 70s), the land and the people. I pointed out that though he has had many different jobs and professions, it seems to me that the connecting thread between them all has been a desire to serve, to apply his abilities in a way that is useful.

I've always had the sense of looking for a purpose in my life, he said. Sometimes it has not been very clear, but I've tried to find that sense of purpose in different ways. I like the idea of people coming together, doing things together, away from the usual kind of politics.

But you are in politics now. You are an MP.

Yes, but I'm interested in a different kind of politics, one that is community led and driven.

On the UK staying together, he said

I see the UK as a symbol of diversity that is constructive. We have people from different backgrounds who live together peacefully. And this idea – the idea of people living together peaceably, it is really very modern.

Towards the end of your book I said, you seemed to have an epiphanic experience in Afghanistan.

Yes! But it's difficult to know how to regain this experience. I've chosen to work in the public eye, for the time being. But I've been tempted to go the other way and live a more private and reclusive life. But this – he gestures towards the cairn and the people – bringing people together in this way, this makes me deeply happy.

It seems to make other people happy too. When I join the chain of people passing stones from the pile a few metres away to the inside of the cairn itself, there are people of all ages, and from both sides of the border, as well as a French couple who are on holiday, saw the sign, and stopped by to help.

On my second visit to the cairn, about a month later,  it had progressed dramatically. The outer ring had been built up by experienced dry stone dykers and the inner pile of stones rose several feet high, many of them painted with images or words expressing solidarity. There was a gap in the outer ring, with a narrow entranceway and corridor leading into the inner circle, so it also combined some of the features of ancient barrows and labyrinths, with its narrow entrance and its circular heart. Flags of the countries of the United Kingdom had been raised at the roadside behind the cairn.

My third visit was shortly after the referendum. The only flag flying now was the Union Jack. The structure is basically finished though I imagine that stones could still be added, should you wish.

The symbol and meaning of cairns is a very ancient one, waymarkers and links to those who have gone before and those who will come after us. The art and craft of wall or dyke building also has a long tradition. The circular formation, always a symbol of wholeness, links with even older stone circles, created to demonstrate humanity's eternal relationship with the skies, stars, the movements of earth and of the heavens and so reveal that changing energy we call time. This stone marker, symbol, celebration, goes deeper than the political dimension only.  No temporary edifice, the cairn is a moving statement, in the way it brought people together in its creation, in its visual appeal and in the way it will endure.