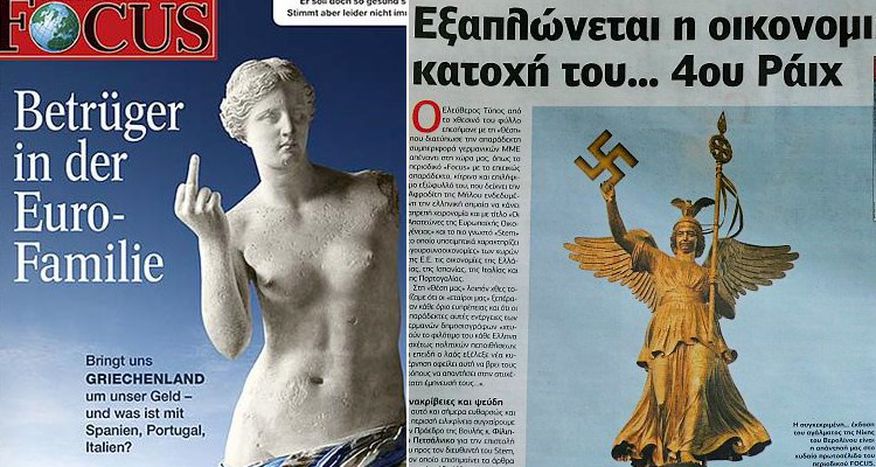 This month, Greece was announced to be suffering a eurozone deficit of 12% - the maximum is 3%. The German media has called them the 'deceivers of the euro-family'. The Greeks respond that they are hypocrites, holding them accountable for debts from 1945. Who wants whose diplomatic blood? We hear immediate reactions from the two sides

The Greek point of view

'It appears that the Germans found the missing hand of the statue of Aphrodite, who graces Focus magazine’s weekly cover, published on 22 February. Impressive; Aphrodite of Melos is one of the numerous Greek artifacts which can be found in European capitals. And Europeans in general have good reason for their ire at Greece; all these years, it was consuming more than it was producing at the expense of other member states. However, it’s easy to ask Greece to cut its defense expenditure when your neighboring countries are Belgium, Luxembourg or Denmark. It’s easy when you never ask Turkey to respect the Greek borders and end up recognising the latter as a European border in order to make a cut in defense expenditure feasible; Greece buys weapons from Germany and France, right?

Sure, the Germans shouldn’t bail out the Greeks. Nor did Athens ask Berlin for money. We don’t want them to pay for our mistakes, but wouldn’t it be right for them to reimburse the Greeks for all they have done during the two world wars? Germany has owed Greece more than 10 billion euros since 1945. When the nazis destroyed almost all the infrastructures, they enforced occupied Greece to take a loan of more than 3.5 billion dollars in order for them to support the German military economy.

'Maastricht was good for the prosperous days, but things have changed'

The argument that ‘through NATO and the EU, Germany has paid much more than it owed to Greece’ is pure populism. Examine how money culminates within the EU; indeed, the wealthier states help the weaker states. However, the latter also have to contribute to the new states. We end up talking about a culmination of money, not of reimbursement. Certainly, the EU has given a lot of money to Greece over the last 25 years. However politics are not heaven-cooked. In 2009, Germany gave Greece 1.3 billion euros via the EU budget. Thank to German exports to Greece, Germany made a surplus of 4 billion euros.

The Greek problem reveals a European problem: you cannot have a monetary union without having an economic union. Maastricht was good for the prosperous days, but things have changed. The EU needs mechanisms in order to prevent future problems. Ireland (their deficit is 10.75%, after Greece and Spain at 11.25% - ed) and various other EU countries also face severe problems; ‘whether the sea is on the wrong side or we are sailing on the wrong side,’ as the Greek proverb goes. As the euro sinks against the dollar, German products become more attractive and competitive in world markets. You can’t help an alcoholic by handing him a bottle of whiskey. But a bit of support costs nothing - within a ‘family’, you are obliged to.'

The German point of view

'What are the Greeks complaining about actually? What did they expect? Over the years they’ve been so casual in hiding the immense cracks in their budgetary policy, knowingly fiddling the other member states with falsified data, and when the 'good stuff' finally hits the fan, then we should simply leave all these contracts broken and help get Greece out of their hole? It’s not that simple. The Hellenic people have been living above their means for too long now, and the bill has to be settled – by Greece itself.

The Germans are quite resentful in their reaction to the Greek crisis, as it was they who lost the most when the euro was introduced: Germany’s central bank, the Bundesbank, once dominated European monetary policy, so that other member states then always felt forced to stick to a more German policy. The Bundesbank lost its almost boundless autonomy through the monetary union. In return, they demanded that the monetary union be run on solid grounds – on the basis of the Maastricht criteria and the European stability pact (an agreement to limit budget deficits for eurozone countries - ed). Now that it’s clear how the Greek government has shamelessly abused that trust, it’s understandable that Germany feels like their toes have been treaded on.

Up until now, the German media has very openly criticised Greek errors: not only with regards to their own budgetary policy, but also to their evident lack of competitiveness. But instead of thinking about the criticism levered on them, the Greeks have taken it to heart. They’re offended, because the Germans generally expect things in return, even in exchange for solidarity; the Germans shake their heads at how Greek workers vehemently protest against their retirement age being raised from 61 to 63 (by 2015). In comparison though, Germany raised its own retirement age from 65 to 67.

The strategy of making Germany the scapegoat for a domestically fudged problem makes no sense. Instead of accusing the Germans of slandering Greece and to apologise for the obscure 'financial nazis' accusation (the Greek newspaper Eleftheros Typos responded to Focus magazine’s cover with a photo montage of the statue of  the goddess Victoria holding a nazi swastika on the Brandenburg gate - ed), Greece should take on the responsibility for their mistakes and face the music. The Greeks can even be thankful: they haven’t been kicked out of the monetary union; in fact it’s looking more and more likely that the other member states will end up helping them financially, despite all the contracts that they have broken. However until that is decided upon, only one thing is being asked – above all from Germany – which the Greek budgetary policy has always lacked in recent years: discipline. And this is both a legitimate and fair request.'