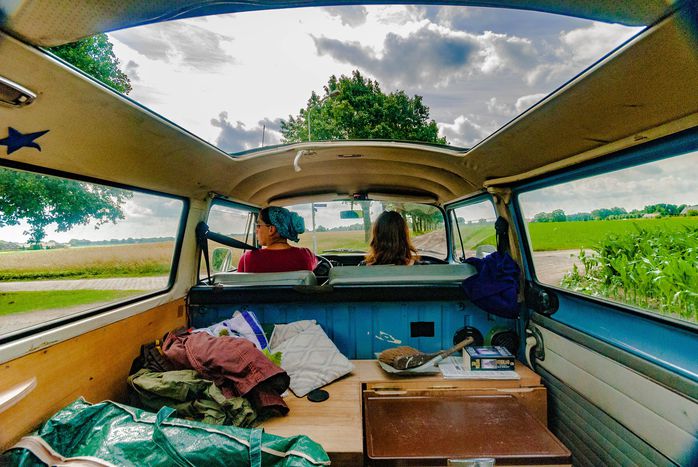 On 13 November, Moldova will elect its new president. Thanks to a Facebook group that reunites the country’s expats, Moldovans will have access to voting polls from every corner of the world. This new initiative could potentially redefine Moldova’s political future.

“I can host two people in New York.” “There are three spots left in the car going from Frankfurt to Kempten.” “We are a group going from Seattle to Calgary, a good 2400km in the name of one rightful vote.” “We have reserved a bus for 70 people leaving from Northampton, join us!”

This is how everyone communicates on the “Adoptă un vot!” Facebook page [“Adopt a vote!” in Romanian, the official language in Moldova, Ed.]. The page is drowning in offers. Just as Nico is inviting everyone to tea in Berlin, Anatolie posts pictures of her flamboyant van that seats 12 people – offering to bring them from Norway to Stockholm, one of the only cities in Scandinavia where Moldovans can vote. In the mean time, Doinizza chooses to post a list of all Italian cities in which her compatriots can cast their votes. If Adoptă un vot! does indeed have any resemblance to car sharing website Blablacar, it is simply to get organised and share accommodation so that a large number of Moldovans living abroad can vote in the second round of presidential elections on 13 November this year.

The idea took form bit by bit in Barcelona, thanks to 28-year-old Anastasia Condruc. A Moldovan who’s been working in Spain for 2 years, she belongs to a generation that chose to leave their country in search for greener pastures. The Facebook group has now amassed over 30,000 members, and new offers appear by the hour. Anastasia is the first to be shocked by its success: “I thought that it could help out a few friends, and potentially reunite 100 people, but that’s all.” It was after a Skype conversation the day after the first round of elections that she decided to launch her initiative. “I was talking to a Moldovan friend living in Los Angeles who was complaining that there were no voting stations nearby. The closest was in Sacramento, about 600km away. Later on I spoke to a Mallorcan friend who mentioned that she was looking for accommodation in Barcelona so that she and six other friends could vote,” she explains. “It was in that moment that I envisioned a platform where everyone could help each other out. I spoke about this idea with a friend in Amsterdam, who immediately jumped on ship and helped me create the group.”

Due to the immediate success of the project, Anastasia and her friend were forced to call on their connections. “Now about eight of us are managing the group, scattered around the world. But others help as well. For example, someone published an interactive map indicating every voting poll in every country.”

Adoptă un vot! is not only a practical guide to all those living abroad, but has become somewhat of a political forum, the only difference being that opinions are not necessarily debated. When members of the group share their journey, their roof and their time they are also sharing their political ideas, all embodied by Maia Sandu. It is impossible for an expat to jump in a car or be part of an organisation unless they vote for this candidate. Opposing the center-right, the young politician has represented the hopes of the Moldovan diaspora since she qualified for the second round of elections on 31 October. Winning 38.71% of the votes, Sandu has revived the pro-European spirit in opposition to Igor Dodon, a pro-Russian socialist who was expecting to coast to power. 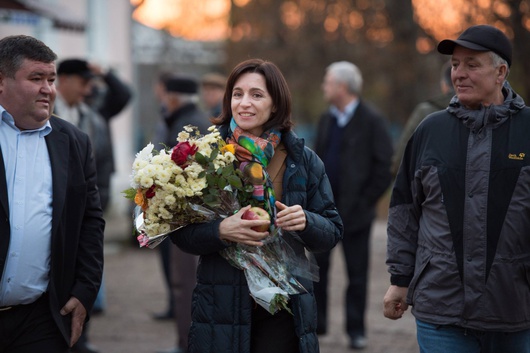 Maia Sandu, who created her own political party “Acțiune și Solidaritate” [Action and Solidarity, Ed.] in May 2016, can count on Moldovan expats to vote for her despite travelling thousands of kilometers to leave their dead-beat country. Like her, they also want to make a “leap forward.” “Maia Sandu embodies a revival,” Anastasia says. “She’s a unique candidate. Firstly because she is one of the first women to get this far politically, but also because she was the Minister of Education. She put things in their place and even has international experience with the World Bank… She knew how to give back hope to Moldovans who had lost faith in their political figures.”

It’s safe to say that the latest scandals haven’t necessarily sparked hope. In April 2015, $1 million (equal to 15% of the country’s GDP) disappeared from the - country’s banks. Suspicious of this mystery and its corruption, both the pro-Russian and the pro-European parties went out to demonstrate their mistrust in huge protests. Since this incident, three pro-European governments have enlisted in an Alliance for European Integration (formed by social democrats, Christian democrats and some liberal parties) without managing to calm the calamity of the Moldovan people, who still deem their political leaders corrupt.

Moldova, an ex-Soviet country between Russia and Romania with a population of about 3.5 million, is still being torn between Russia and Europe. The eternal debate is which side to choose. To renew relations with Moscow, which placed an embargo on Moldovan meat and fruit after they signed an agreement with the EU in 2014, or to collaborate with Europe and open a new market? Chisinau, the capital, is a perfect depiction of the country’s see-sawing. There, both Russian and Romanian are spoken in the streets and the media, and the Cyrillic alphabet mixes with Romania’s Latin-based language on every wall. The East/West debate is all the rage, and is becoming even more of a concern with the upcoming elections. Anastasia regrets that geopolitics has become the most popular subject in the elections. “What should be at the heart of these debates is the fight against corruption,” she explains. “First we have to deal with internal issues, and then we can discuss partnerships with other countries. It’s a disillusioned debate, and sadly we are only concentrating on this one issue.”

Whatever happens, on 13 November Moldovans will head to the ballots to decide their destiny. “If Maia wins, of course we will celebrate. Hundreds, maybe even millions of Moldovans from the diaspora have reunited, travelled together, and gotten to know each other. This group has brought us many things. We don’t feel lonely.” Anastasia confessed. “People in Moldova confessed that they hadn’t voted in a long time. But when they saw the enthusiastic and optimistic messages in the group, they wanted to believe in something and vote.” The group could be an archive of voices that will make all the difference for Maia Sandu. During the first round of elections, only 49% of Moldovans made the effort to vote according to the electoral commission. Could the 20% of Moldovans living abroad change things?

Whatever the result, Anastasia believes that Sunday will end well. “Just seeing this mobilisation is already a victory. The most important thing is, even though we are far from home, people around us share our opinions,” she says. Democracy’s Blablacar, Couchsurfing for solidarity or a global meeting point - Adoptă un vot! has surely allowed for the Moldovan presidential elections to be exciting.