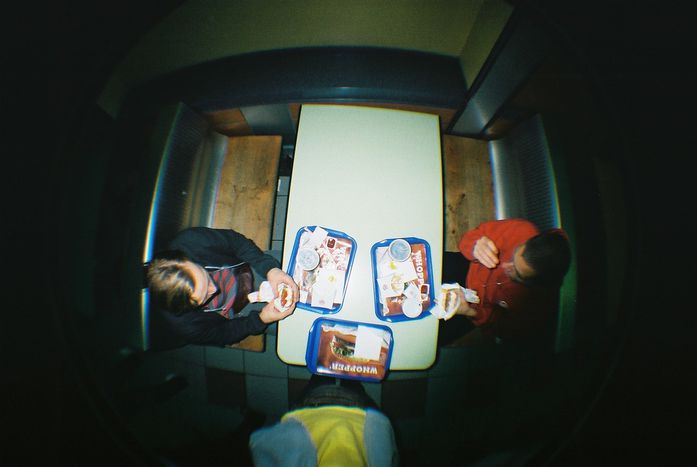 September 2010. Students are purported to be so politicised that even their school canteen is split into liberal and conservative factions. Two journalists from Lithuania and France investigate an erasmus myth which seems to have disappeared thanks to a new 'apolitical' generation

Istanbul is home to seven public universities and thirty private universities (the youngest of which opened in 2010). Erasmus university exchange students have spoken about one mythical trend which may sound very exotic to students and graduates in northern, eastern or western Europe: that students in Istanbul are deeply divided along political lines. Even their canteens have a political orientation, with some catering for socialists whilst others serve islamists. You eat what you believe in, and people who believe in the same thing know where to find you. Intrigued, we set off to the oldest and the most prominent higher education establishment we know of.

Monday morning on the 1453-era campus doesn’t feel too busy. The security guards check the IDs of everyone who is entering the campus, somewhat relaxed. As we walk along a pretty path across the green towards one of the faculties, some female students wearing headscarves pass us by, then some older students, as well as many young people chatting and not hurrying inside. Although the university is in the very heart of Istanbul, fewer people speak English than expected. Finally we meet a student on the way to one of the canteens – she gladly shows us where to go. 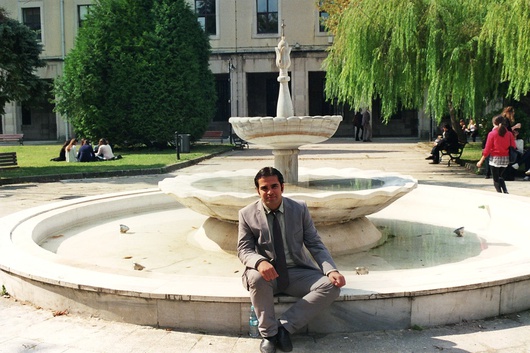 The canteen looks ordinary. Sandwiches, Cola – do the nationalists eat here? Or the liberals? ‘This canteen is for everybody,’ explains Kerem, a PhD law student who speaks perfect English. He is enrolled in a different university, but takes some classes at Istanbul university. In his view, students are not politicised at all. ‘Maybe it was the case in the past,’ he says. What does stirs up political student life nowadays then? Students usually have strong opinions about the current government, he says. ‘For thirteen years it was forbidden to demonstrate on Taksim square. The government considered it to be dangerous, since it could be used by mafia-like movements. The [current] president did the right thing for the people in my opinion – now people can go and demonstrate and nobody is injured. People were saying, ‘Oh, why didn’t we think of this before?’ Everyone can go there, as long as it’s peaceful. It’s good for people.’

What policies are most relevant to university life? ‘A new agenda allow womens to wear a [head] scarf. Now people who believe that it is necessary can go to university – before they couldn’t, it was forbidden. Now it is open, especially in this university. Before it was the main conflict, people demonstrated against each other. Something has changed, and because of that people can go to lectures. You can see it in the classes.’ Kerem is certain that in Europe governments would not even think of imposing such limitations, and is surprised to hear that headscarves are also forbidden in France. ‘Our constitution is imposed by the military, and such policies are developed by politicians, not by the people.’

So it is the headscarf which intrigues and divides students, not canteens. One fourth-year law student disagrees; not so many students have strong opinions about whether wearing a headscarf should be permitted at the university or not. ‘Everyone is free to wear what they want, only politicians have a problem. This year there are more such girls in class. Before (the ban was lifted), they used to take off their headscarves near the university and put on a wig or a hat.’ As for university life, the 23-year-old explains that just a few years ago things were very different. ‘Student life is livelier. Until last year we only had classes at noon and then dispersed. Now we spend more time together. Before there were only intellectual student clubs which were not much fun. But the new generation is apolitical - or at least people don’t express their political views.’

Eventually we confess that one of our missions is to check the politicisation of university canteens. ‘In 2005 canteens were still separated,' our anonymous friend says. 'I witnessed this for one academic year. There were two sides, usually along the smoking and non-smoking lines. Food was the same, and alcohol is not permitted at the university in any case. Liberals were reading their magazines on one side, and conservatives were sitting with prayer beads. But many political activists graduated and others were expelled after having problems with the university.’ Nowadays there is no dominant political stream in the previously predominantly liberal university.

'There were two sides, usually along the smoking and non-smoking lines'

So, our confusion is gone. We know the explanation: everybody was right: both our friend, who told us about the divided canteens, and Kerem, who does not remember any divisions in this university at all. Political divisions vanished like a smoke and were pushed aside by the new, fun-loving apolitical generation. Our mission to see the situation about the canteens is completed, but since we cannot test our stomachs on socialist, islamist or liberal food, we decide to have lunch outside. From afar, we hear shouts between the sounds of a military march and of lads playing football – we’ve stumbled across a flash mob accompanied by journalists and photographers and an inert public with a glazed look of seen-it-before. 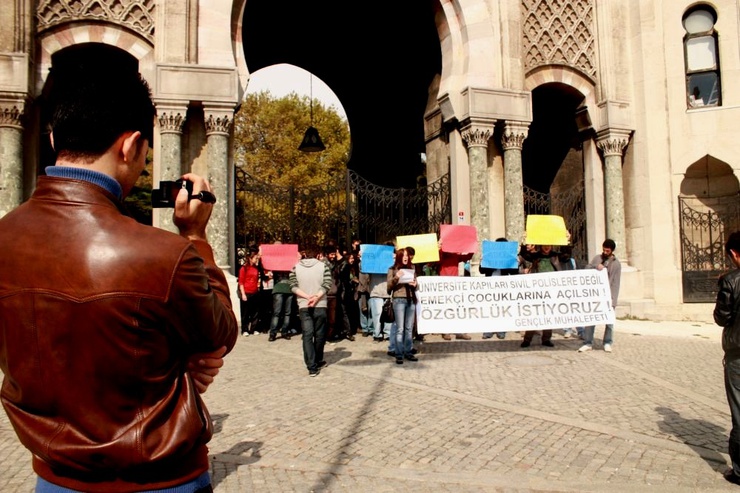 After ten minutes it’s over. ‘We’re a revolutionary organization who march in the footsteps of the 1968 and 1978 generations. There’s around two to two-and-a-half thousand members across the country,’ explains Can Ugur, youth organisation member. ‘Demonstrations happen almost every week, we’re used to that.' We continue to watch the protest with three English literature students, Hakan, Furkan and Oguz.  'This time it's against the right of the police to enter and inspect the university freely.’ The demonstrators are said to be socialists; their symbol is a lifted left fist. ‘It’s dangerous to get too political,' frowns Furkan. 'One day you might be expected to beat up your friend. No, we want peace.’ The boys tell us that their socialist colleagues want to trigger more activity from students. 'But usually such demonstrations do not achieve any results.' For them the question of the headscarf is a false friend which diverts attention from the real issues that count, such as poverty and the inequality in accessing education. Apolitical generation? You decide.