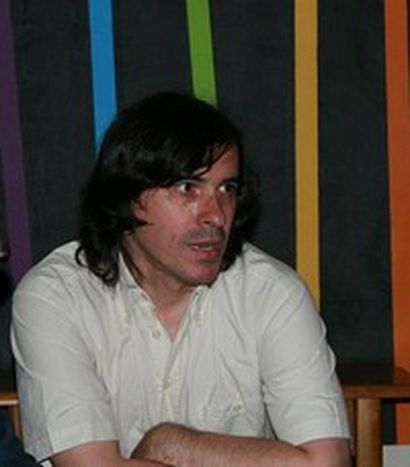 Mircea Cartarescu on men 'who have something feminine about them'

It’s a beautiful, sunny day. In a café in the centre of Warsaw, Mircea Crtrescu is feeling 'the joy of a debut,' having come back from a book signing promoting the Polish edition of Travesti (also known under the title Lulu), a novel that he says completely changed his life, and which is being published here sixteen years after having been written.

One of the most popular Romanian writers, Crtrescu was born in the difficult year of 1956, with his first debut coming at 22. By turns he has been a teacher of Romanian, editor of a magazine called Caiete Critice ('Literary Notebooks'), a lecturer at the University of Amsterdam from 1994-95, and a lecturer in the literature department in the University of Bucharest since 1991.

I come to the meeting full of fear, because Travesti is terrifying. It is a strange novel exploring the gloomy insides of the human psyche and sexuality, describing traumatic childhood events and teenage initiations. It emanates evil, violence, dirtiness, filthiness and loneliness. It makes you grateful that you are through with the difficult period of growing up. The author himself has the hypnotising gaze of a starved wolf, which makes me feel awkward at the very least - until the moment he speaks. His voice is calm and nice, the evil charm is broken.

Study of a mental disease, or gay novel?

Travesti is a study of coincidence. The main character is a boy born a hermaphrodite and brought up as a girl until the age of four. Finally, his parents pick the sex – overnight, a girl becomes a boy. The child forgets about this memory, until it is re-awakened fifteen years later. The boy experiences homosexual aggression during his summer vacation, causing him to undergo a mental crisis. In the years afterwards psychiatrists use the therapy of writing as his treatment, reviving his memories. When the now grown man remembers what happened during his disturbing childhood, after a period of shock and transformation, he is healed.

'I myself didn't know what it was all about, even when I was close to wrapping up the book,' remembers Crtrescu. 'I spoke to an older professor who eventually cleared it up for me. I was writing very slowly, during a whole year, feeling that I was creating a literary disaster. The publisher told me it was the worst book I had ever written. First reviews were very negative. I really had a hard time, thinking it was going to be the end of my career. It was only a year after publication that I got a positive sign – a woman came up to me in a park and said that she liked my book. This was more important to me than all of the bad reviews that I received.'

Apparently this event was a symbolic breakdown, because afterwards the way in which the book was received and consequently, the way in which it affected the life of its author changed completely. 'I received two of the biggest literature awards in Romania (including a double whammy with the Romanian Writer’s Union Prize and the ASPRO prize in 1994). 'Never before and never after did I simultaneously receive two prizes for one book.' Today Travesti is firmly on the school curriculum.

Translated into many languages, including French and Dutch, the book won Crtrescu fame – even where he least expected it. 'The world acclaimed the book as a gay book. Without my knowledge, the covers of Travesti show young men in very specific positions in the Netherlands, Italy and France. In Italy there was even a review entitled Piccola Biblia Gay, meaning 'Little Gay Bible. One day an Italian director contacted me to make a movie for the film studio 'Mirinda'. Elated, I checked the film studio's website right away to read more about what they do. Well, I enriched my general knowledge at least - 'Mirinda' is the name of a transvestite who began the gay revolution in New York.' Crtrescu sums up the whole situation with a bit of humour: 'If I was sly and money-hungry, I'd be reaping the benefits today. But I told the truth about my own preferences right away, although from then on I subsequently became completely uninteresting.'

Loving women and the European Union

Crtrescu's most recent book Why We Love Women (2004) explains his personal preferences quite clearly. We move from the dark and gloom of his last book, full of psychoanalysis and poetry, to a lucid and straightforward story. 'Why We Love Women is a set of twenty short stories that I wrote for 'ELLE' magazine. The protagonist of every one is female, but they are not individual portraits of women – it is a group portrait of womanhood. Coincidence made me publish them in one volume, a coincidence which was a lucky option - it is my only bestseller. In Romania alone 150, 000 copies were sold.' It was also published in France and in Spain, and is heading to Poland soon. When did a serious writer became a women's magazine contributor? 'It's a bow to the better part of the world. Simultaneously, it's a way to let out the womanly part of my soul. Womanhood is not a domain which strictly belongs to women, just like manhood is not only the domain of men. I like men who have something feminine about them and the other way round – woman who have something masculine about them. These kinds of combinations are quite common among artists.'

Crtrescu writes 'serious books' and is not afraid of light, half-commercial forms. 'Good books cause the brain to go on strike,' he reflects, on what makes a book good. He also has clearly defined views about the place of Romania in the EU: 'the French can afford to be eurosceptic, but we cannot. We face the following choice: to be in Europe or to be nobody. This is why I think that Europe has the potential to become a supernation. We cannot say that we are Romanians with pride if we refuse to say that we are Europeans at the same time. Joining the EU means an increase in self-respect. I really wanted it, and was really happy when it came true.'