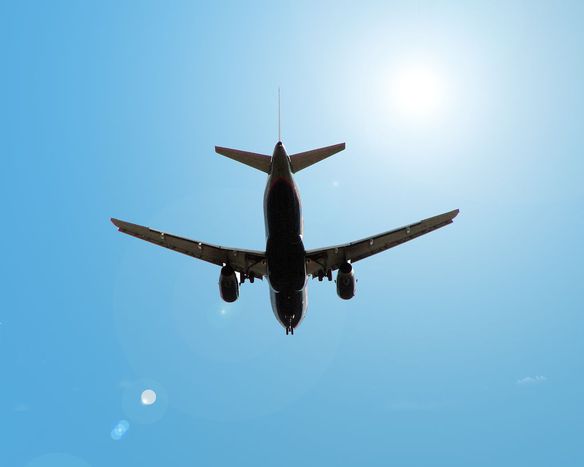 What really happened over eastern Ukraine on yesterday’s afternoon? Before the world finds out what was recorded in the Boeing 777‘s black boxes and before the situation in Russia and Ukraine becomes clear, we are stuck only with information fed by the press. This is how the media reacted to the yesterday’s tragedy.

Poland: “Russians are sorry, but they do not see who is to blame”

The Polish most popular portal TVN 24 informed today that Prime Minister Donald Tusk had said: “We are dealing with an act of terror even if the people responsible say it was a mistake. It is critical that we remember that two other airplanes were shot down as well. There is no justification for bringing down state aircraft on the territory of that state.” Gazeta Wyborcza, a Polish daily paper, said: “Russians are sorry, but they do not see who is to blame.” Nasz Dziennik, a right-wing Catholic newspaper, accused UE of lack of concrete action in the matter: “Sanctions for stances - European restrictions on Moscow the only concrete effect of European Summit,” read the covers. On the other hand, the most interesting articles propaganda-wise appeared on the website of the radio station Głos Rosji. One of them stated the following: “The Ukrainian surface-to-air or military aircraft missile that hit the Malaysia Airlines Boeing 777 could have been aimed at Russian President Vladimir Putin’s aircraft as a possible target.” 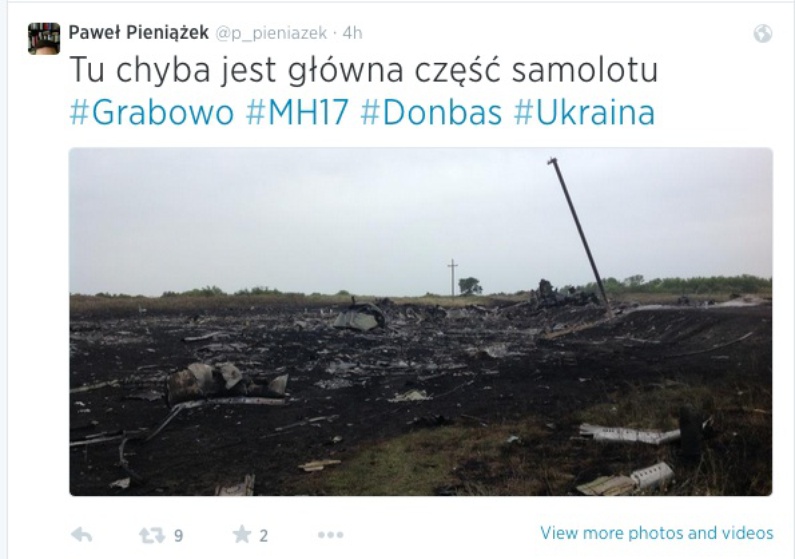 France: “War in the open sky”

Libération, a French daily, was not particularly delicate in describing the situation the day after the disaster. It wrote there was no doubt that the shootdown of the Boeing had been planned and that it was a part of the ongoing war waged between pro-Russian separatists and the Ukrainian army. “The pro-Russians’ version of events implies that the fact that the rocket was aimed at the passenger plane was a terrible accident,” it read. Le Figaro pointed to “the escalation of aggression” as well whereas Slate.fr, an online magazine, took a step further asking whether the catastrophe “[would] be for Ukraine what the assassination of Franz Ferdinand [had been] in the context of World War I”. The coverpages of HuffingtonPost.fr screamed “Cold War!” accompained by photos of the plane wreckage. 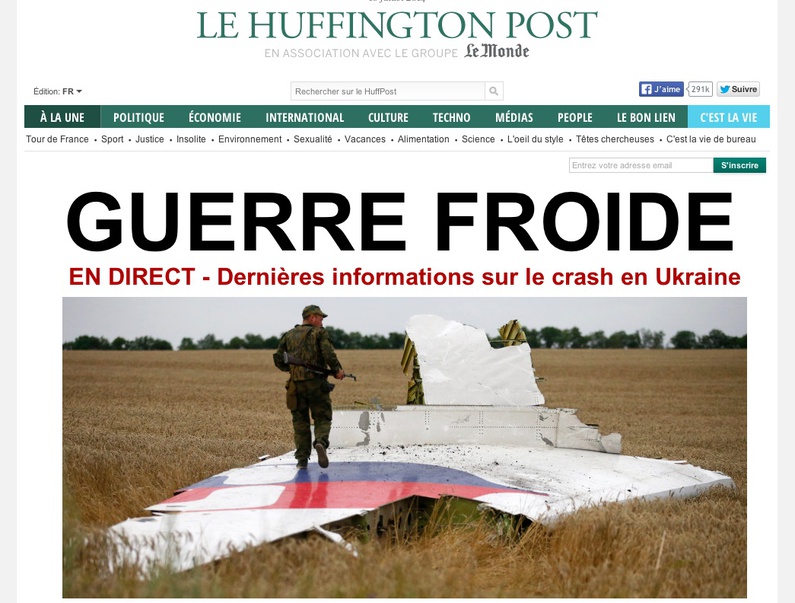 Austria: “This tragedy will remain unexplained for a long time”

“A disaster or deliberate action?” asked the Austrian paper Kleine Zeitung on the cover of its last issue and added that the tragedy would remain unexplained for a long time. “A Malaysian plane once again,” wrote the newspaper. “Kiev authorities put the blame on pro-Russian separatists. They deny the accusations.” 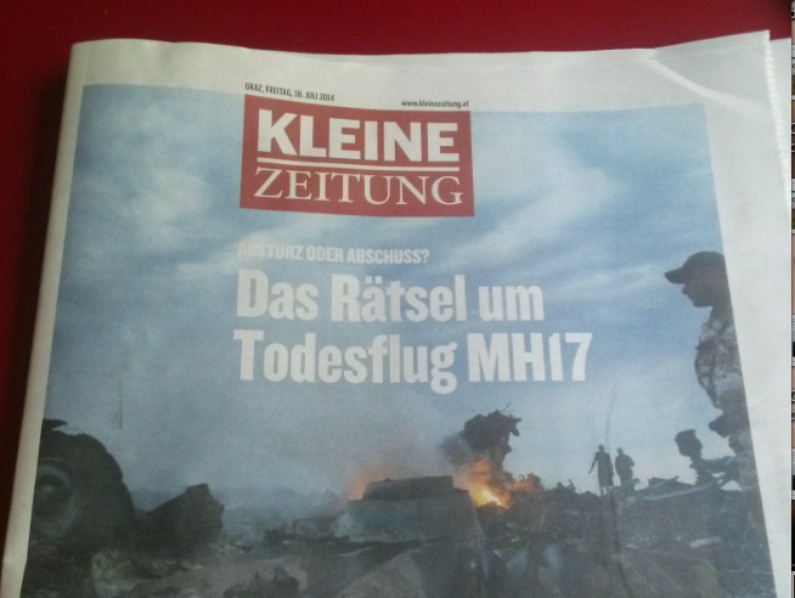 Germany: “The United States is convinced it was a shootdown”

The German magazine Ntv Nachrichten stated that the United States was convinced it had been a shootdown. The German most popular television news service Die Tagesschau announced yesterday: “Oddly enough, social network websites were flooded with posts moments before the tragedy: ten minutes before the world knew about the accident, eastern Ukrainian separatists posted that they had succeeded in bringing down a military aircraft crossing their airspace. The moment the media started to report on a passenger plane disaster, the posts disappeared.” Zeit Online was the first German magazine to interpret the events: “a new stage of the conflict has come,” the conflict not being “dormant” anymore. The journalists underlined that the separatists had proven that they had arms to “shoot down airplanes”. At the same time, the magazine asked an open question whether the event was “a misunderstanding fraught with tragedy” and whether “Putin would have any interest in such an escalation of aggression”.

Russia: “somebody has foreseen this catastrophe in an inexplicable way”

Russian TV Vesti24 and Russia-24 announced that Sergey Lavrov, the Russian Minister of Foreign Affairs, had officially recognised the Kiev accusations against Russia as unfounded. According to the Russian TV station Tv Zvezda, exactly the month ago “News of the CPSU,” a Twitter user, published a post where he had foreseen that a plane with foreign tourists would soon be shot down over Ukraine, which would be an invitation for NATO to take sides in the Russian-Ukrainian conflict.

Italy: “The only known fact is that the plane was shot down with a missile”

Although the Italian press attacked Moscow and Kiev in turns, a general analysis indicated that the national media put the blame for the catastrophe on the pro-Russian separatists. The left-wing newspaper l´Unitá pondered: “will the Russian separatists from Donetsk indeed help OECD investigate into the matter and secure the perimeter for international experts?” The centre daily La Stampa stated: “The only known fact is that the plane was shot down with a missile. Although it is currently impossible to determine who was shooting, a recording has been published online, where we can hear the separatists say ‘we attacked a passenger plane’ ”. Il manifesto, a Communist newspaper, emphasised that “this disaster prove[d] again that Europe [did] not share a uniform stance as for its foreign policy.” Rightwing Il Giornale wrote: “it is Ukraine, not the separatist army, that seems more likely to own arms capable of bringing down an airplane”.

Spain: “What do we know about the MH17 flight?”

Of all the Spanish magazines, El Pais made the coolest and most objective evaluation of the events. The daily focused on facts (i.e. passengers’ nationality and the talk between Putin and Obama) and only then on the complex Russian-Ukrainian conflict. El Mundo, on the other hand, chose to be rather Rupert Murdoch-style sensational, stating: “What do we know about the MH17 flight?” as if to invite us to immerse in some kind of a thriller. Spanish Prime Minister Mariano Rajoy publicly condemned "this barbarous act,” as he referred to the catastrophe, and demanded an independent investigation into the matter.

This article has been created thanks to the contribution of local teams and Cafebabel journalists.