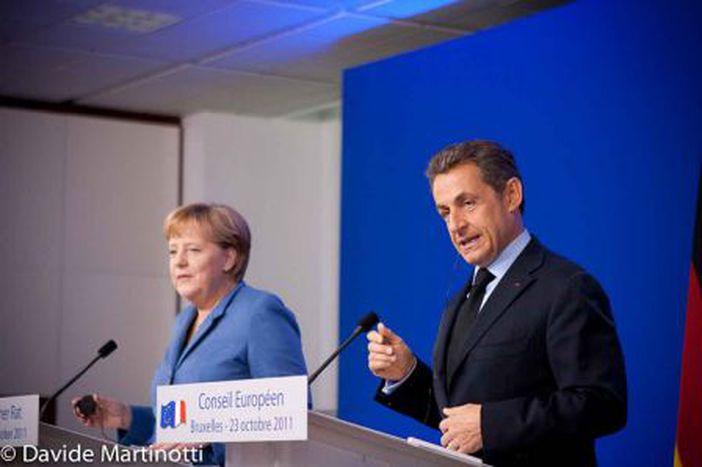 Merkozy in the news, yonder

By Elodie Romain, photo by Davide Martinotti Europe is in crisis. Government debt is, among other preoccupations, a focal point for the media. German Chancellor Angela Merkel and French President Nicolas Sarkozy have hoisted themselves above the other European countries to deal with the problems facing the EU27.

Their relationship has not gone unnoticed by the international press, nor have their differences.

While politicians from outside the EU are looking to Europe to find concrete solutions, at the time of writing, none have been found. Yet it was not for lack of talk.

The main international media speak about the EU, but also the Franco-German relationship. Russian Prime Minister Vladimir Putin told the Chinese press that European issues were first before economic policies. The New York Times looks at the "Sarkozy-Merkel" puzzle and notes that an agreement is more difficult to find in view of their growing differences. For example, the two leaders can not agree on the rescue plan of the euro zone or the intervention of the European Central Bank. According to the New York daily, the report of a new European Council meeting on Wednesday is nothing but the need for Nicolas Sarkozy to put pressure on European countries so that Angela Merkel will opt for a more flexible solution on the fight against the crisis. The New York Times did not hesitate to take a German declaration affirming that France was struggling, too. The disagreement between the Franco-Germans is noted across the Atlantic and the media also perceive that despite their closeness, no solution has yet been found to address the Greek problem.

Many foreign newspapers reported the birth of "baby Sarkozy." This is certainly true of China Daily, which also suggests the contrast between the Chancellor and the French President. The Chinese newspaper shows that France and Germany are divided, including with regards to the functioning of the European Financial Stability Fund. As a reminder, Nicolas Sarkozy wants to make it a bank while Angela Merkel and the European Central Bank refused.

"France alone," is how the country described Sarkozy in Buenos Aires Herald, an Argentine newspaper. According to the newspaper, Sarkozy became isolated after the Franco-German meeting held this week in Frankfurt.

The Times of India goes further and emphasizes that this relationship is not looking good. Indeed, the Indian media goes into detail on the two perspectives: Merkel wants a contribution of each country. The use of the EFSF would be the last resort if a country is not able to participate. In contrast, Sarkozy preferred to use the fund instead of his own savings. Remember that the presidential elections in France are fast approaching and one should not tap into the coffers of the citizens. The Times of India further asserts that the French government reportedly denied the existence of any disagreements with his German counterpart.

Strained relations between Nicolas Sarkozy and Angela Merkel have not gone unnoticed by the international press. Moreover, they advance as leaders of the European Union, but if those responsible are not on the same page, how could they reach agreement? To be continued ...