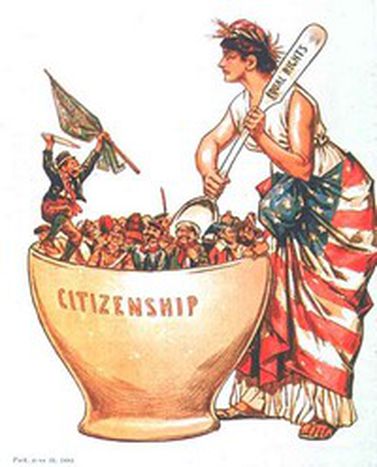 What is the difference between melting pot and multiculturalism? How can we manage this diversity in Europe?

How was multiculturalism born?

The melting pot is at the origins of multiculturalism. It is considered to be the historic foundation of American integration policy, and represents society as a giant pestle and mortar, where cultural origins and differences were crushed and blended. Many saw the melting pot as the model to follow for all multi-ethnic societies. But after a time, the blend started to go bad. This is when multiculturalism imposed itself as the new recipe for western societies, looking for effective and painless solutions to get out of the cultural impasse represented by the small-minded attitude to culture. The uniform dish has given way to a colourful mixed salad where ingredients live together, each one keeping its own unique taste.

How can you define it?

Multiculturalism is a political strategy for managing interethnic relations, based on the value and respect of differences in customs, culture, religion or ethnicity. Multiculturalism came to the fore in the 1980s, and was progressively implemented in the United States then in Europe, but its roots go back to the 1960s. At that time, problems of ‘difference’ started to emerge in western societies, further propelled by the rejection in the late sixties of traditional culture and consequences of decolonisation. The escalating phenomena of migration and globalisation put an end to the culture of the unique in favour of a real culture of differences.

What is the main significance of the concept of multiculturalism in intellectual debate?

For the American historian, Francis Fukuyama, ‘good multiculturalism’ is a kind of “corporate multiculturalism”. It is based on spreading identical consumer habits across different lifestyles of various social, ethnic and cultural groups. Italian political scientist, Giovanni Sartori, is not of this opinion. For him, by definition multiculturalism is ‘bad’ as it builds a society based on separate identities, creating ghettos. Sartori proposes the ‘European model of pluralism and tolerance’ as an alternative, presented as the ‘correct management of diversity’.

What is the European Union doing to improve the integration of immigrants?

The EU programme ‘integration of third country nationals’ finances and promotes integration initiatives targeting those who are not members of the EU25. This project aims to encourage dialogue in civil society, develop integration models, and spread and highlight the best initiatives regarding integration. The EU member states have contributed 5 million euros for this project. At the same time, the EU has collated an ‘integration manual’ which explains government and public authority practices in Europe, in the areas of training, political participation and inter-religious dialogue. The manual, presented at the end of 2004, underlines the necessity to include unions, foreigner associations and employers.

What are the European integration models?

Europe switches between two models, the French ‘assimilation’ model, and the Anglo-Saxon ‘multicultural’ one. Both are going through a crisis. The first one practices integration based on trade; there is an exchange of citizenship for religious discretion (for example, in France, the Muslim veil is prohibited in schools). British multicultural policy gives freedom to minorities in the form of ‘collective rights’ to allow a harmonious coexistence between different ethnic and religious groups inside a liberal and tolerant political society.

How have they failed? In France, many second and third generation French people refuse the old-style republican assimilation method. This trend is proven, among other things, by the riots in French suburbs last November or the protests against the 2004 law banning the Muslim veil. In Britain, many Muslim groups do not feel represented by state laws, creating hostile and isolated minorities. British public opinion could be summed up by a phrase from the chair of the Commission for Racial Equality, Trevor Philips, “multiculturalism does not mean that everyone can do as they want in the name of their culture.”