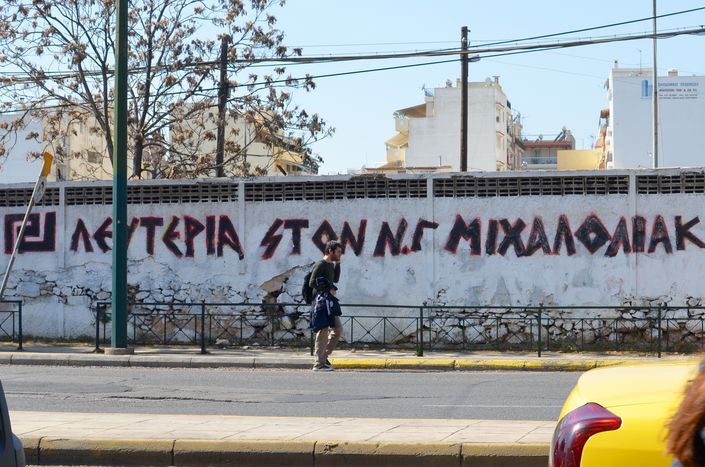 Golden Dawn, who many consider to be a neo-Nazi party, has seen worrying success among Greek youth. Today, amid fears of a new surge in support for the party that can no longer be fully explained by the economic crisis, one question is being asked: what motivates these young people to vote for the party? A story of hoodies, graffiti and burly looking skinheads.

"You can't mention my name or job." Right from the start, Kostas (a pseudonym) lays down his conditions for interview. It's not that he's ashamed of voting for Golden Dawn – the radical right-wing party described as fascist, even neo-Nazi – instead his insistence for anonymity is strictly professional. "I'm not supposed to give my opinion," he explains.

On the backs of the youth

We meet Kostas just after he finishes work, in a small park in Kallithea – a middle income Athens neighbourhood. Despite the good weather, there are few people around. Kostas is already waiting, sporting hoodie and trainers. Though very polite, the 25-year-old doesn't conceal a certain degree of mistrust. Recording the interview is out of the question, for instance. We have to make do with taking notes.

The "meander" symbol of Golden Dawn stares down at us like a winking eye from a wall opposite. In a city where buildings without graffiti are the exception, it's not uncommon to come across the party's symbols scrawled in marker or black spray paint. Kostas appears to take little to no notice of the insignia. Sitting on a low wall, he gets ready to tell us what pushed him into voting for Golden Dawn. 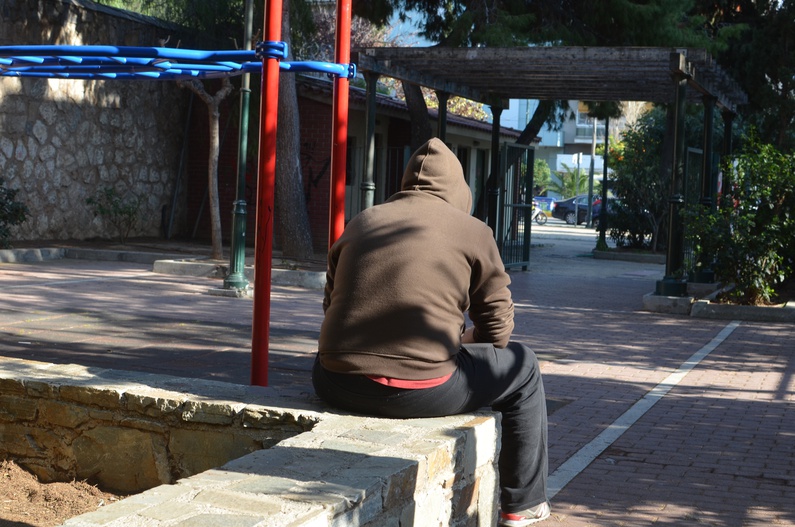 What does Golden Dawn represent besides hoodies and anonymity? Known in Greek as Χρυσή Αυγή (Chrysí Avgí), the party won 7% of votes in the most recent legislative elections, making it the country's third largest party after Syriza and the conservative New Democracy (ND). For a party that remained virtually unknown for 30 years – in 2009 they scored barely 0.3% of the vote – the current figures represent a resounding success.

Yet the party has a chilling reputation. Even Marine Le Pen has ruled out an alliance with them in the European Parliament. Not without reason: the party is linked to violence towards immigrants, holds racist and ultra-nationalist views, and has a leader who admires the Third Reich. The list goes on. Said leader, Nikolaos Michaloliakos – nicknamed "the little Greek Führer" – is currently on trial for being part of a criminal organisation.

Yet despite the party's increasingly toxic reputation, it still represents a fresh approach in a Greek political system riddled with all kinds of woes. Anti-establishment, populist and one-sided, Golden Dawn still garners support from young people. The statistics show that the younger you are, the more likely you are to vote for Golden Dawn. The jury's still out on whether these are protest votes, or if they truly identify with the extreme views the party espouses.

Kostas was very young – just 13 or 14 – when he first heard talk of Golden Dawn. "It was when I was at school and I was discussing it with my classmates," he recalls, "At the start, I was against all of that. It wasn't until later on, after reading newspapers and online articles, that I became convinced."

A few years later, in 2012, he cast his first vote for Golden Dawn along with 450,000 other Greeks, enabling the party to make its sensational entry into parliament. It was a vote against the system, a sign of discontent with a political class prone to scandals and corruption.

"Originally, I voted for them only to reduce the power of the other parties," Kostas confides, "But when I saw the open war that the media and politicians had declared on them, that gave me confidence in my decision. I've voted for them in every election since."

Nikos, 30, also wants to take part in this "open war". A security officer for a large private company, he first voted for Golden Dawn 4 years ago. When explaining his viewpoint, Nikos makes reference to a notorious incident in 2012. During a televised debate, Golden Dawn representative and member of parliament Ilias Kasidiaris – a burly looking skinhead – violently slapped a Communist member of parliament. "They focused on the slap itself, but not on what caused it," Nikos asserts. Since the episode took place, he has seen it as proof of a determined media campaign against the party.

The incident occurs at 1:20

This argument may have its flaws, but Golden Dawn's establishment opposition remains at the heart of its strategy – even though this leads to some absurd situations. Alexandros Sakellarious – who holds a doctorate in sociology from Panteion University in Athens and also authored a study on young Greeks' attitudes towards Golden Dawn – explains that a 2012 opinion poll showed that "some voters hesitate between Syriza and Golden Dawn". That is to say, between the radical left and the radical right. What do they have in common? Anti-establishment and anti-austerity stances.

Golden Dawn certainly has occaision to celebrate. As is often the case with the ultra-right, the party is riding a wave of support thanks to positioning itself as victim to a media and political establishment that seeks to "hide the truth". Slogans such as "turn off your TV, you'll find us online" serve to demonstrate this.

In fact, this media stance is ultimately summed up when the party's press service contacts us. "We don't pay much attention to the media or interviews," they say, "because in the end, journalists just write whatever they want."

This is further backed up by an unequivocal remark made by the party member who prohibited us from entering one of their meetings: "Being a journalist is even worse than being from Syriza."

"There are some arseholes in the party, I know that."

The fact that thousands of young people have chosen to vote for one of the most violent and extreme radical parties in Europe cannot solely be explained by mistrust of the system. The key reason put forward by the media, and several Greeks we spoke to, remains the great problem of the 21st century: the economic crisis. The explanation is well known: the crisis hit the country hard, pushing thousands of unemployed and desperate young people into the arms of neo-Nazis.

But Sakellariou sees this explanation as caricatured and simplistic. The sociologist points to a lack of knowledge among young Greeks about Golden Dawn's past and the history of the country itself. In his view, the influence of the crisis is "undeniable," but it "has merely spurred on those who were already ideologically close to the party to take the step of voting for it."

"We can't turn a blind eye to it," he emphasises, "there's an ideological closeness to Golden Dawn to be found among the Greek population. Other countries – like Spain or Portugal –have also been hit by the crisis, but have not seen the rise of a party comparable to Golden Dawn." He believes that the evil is deep-rooted: "If the crisis in Greece evaporated today, I doubt that Golden Dawn would be so quick to disappear."

This ideological closeness can be especially felt when it comes to immigration (specifically with reference to Muslims). These hard sentiments are put forward as one of the main motives for voting for the party. Sentiments shared by Kostas and Nikos, but also by other Golden Dawn voters interviewed as part of Sakellariou's study. Foreigners are viewed as a threat – to jobs, to security, to Greek culture. "Muslims are taught that killing a Christian means you get 70 virgins in paradise," Kostas and Nikos tell us simultaneously, as if reciting a phrase learned by heart. 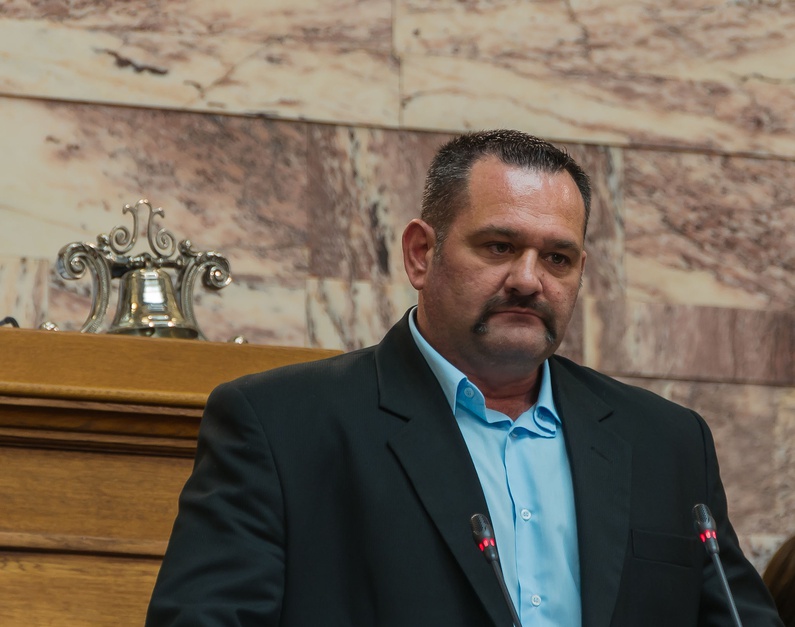 Aside from this, the pair does not share all of Golden Dawn's ideas. "Physical violence towards illegal migrants is unacceptable," Kostas tells us.

"There are some arseholes in the party, I know that," Nikos concedes, though he is less bothered by the party's violence than by the historical revisionism of several of its members who "glorify Hitler". It's why both of them have completely ruled out party membership.

"The party is national socialist, but not necessarily its electorate," affirms Sakellariou. This means that, in order to gain votes, Golden Dawn doesn't even need to detoxify its image.

"It has just become a little more discreet about its neo-Nazi affiliations," explains the sociology researcher, "Selling yourself as a nationalist party has higher dividends. Though not so much so that you need to cover up your past." Whatever the case may be, it seems that this is sufficient to gain more "moderate" voters.

This leads us to the next question: How many Golden Dawn voters are completely won over and how many of them remain sceptical? It's difficult to say, but in any case, Sakellariou believes that "when people vote for them time after time, one can no longer look at it as a simple protest vote."

One further question: "Could they govern?" Kostas and Nikos drop their restraints and quickly respond in the affirmative. "Maybe even better than the others," Kostas adds, without batting an eyelid.

Today, Golden Dawn could well continue to gain ground, given the migrant crisis, in which Greece finds itself on the front line. It's a major transit country, and the situation has recently deteriorated yet further due to the partial closure of the border between Greece and Macedonia.  Thousands of migrants remain stuck in a country that they have no plans to stay in.

In the capital, makeshift camps are popping up every day. Just 150 metres from Golden Dawn's head office, near Larissa Station, some families have set up mattresses and blankets. A surprisingly talkative police officer confides to us that he fears that it's only a matter of time before problems arise with members of the party – unless the latter are hoping to see the situation detoriate quietly, so that they can then present themselves as the only solution.