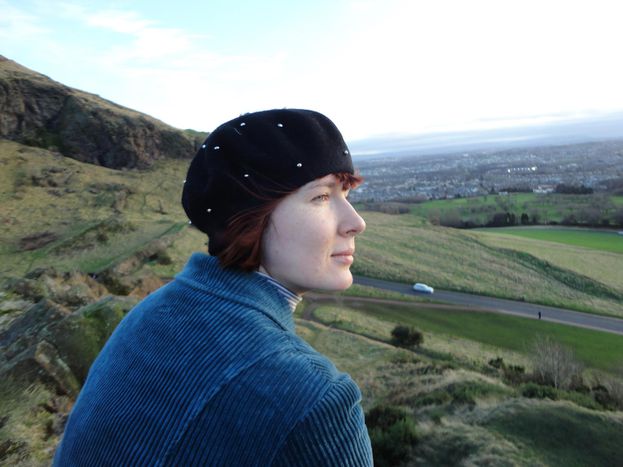 "I need to stop thinking about the indyref," says an excited Ceris Aston, a yes campaigner from Kirkconnel for the referendum on Scottish independence that takes place today (September 18th) and might set a precedent for independence movements and direct democracy in Europe. This is how a 23-year-old English girl got to be on boat of the Scottish yes campaign.

cafebabel: How do you feel today Ceris?

Ceris Aston: We’ve been waiting for this day for such a long time. I’m excited, very nervous, tired - I have not been sleeping very well recently. And hopeful.

CB: 'From a cybernat with love’ is your latest blog post before the big day, what does the term mean?

CA: It’s a derogatory term used by the media and the no campaign to describe online yes campaigners. The Scottish campaign for independence is criticised for being a nationalist campaign, with all that implies — anti-immigration or anti-English feeling, for example — basically being very insular. Cybernats [cyber nationalists] are said to be aggressive and mean. In my post, I wanted to reclaim the term because we are not all dicks, honestly.

CB: And what do you call the no campaigners?

CA: Their campaign is called Better Together. A term that is used is ‘Bitter Together’ but I don’t use it personally. I have friends who will vote no and I disagree with their arguments but I still know they are lovely people. They probably shouldn’t be too smug if it’s a no vote, though – I’ll be feeling a little raw… 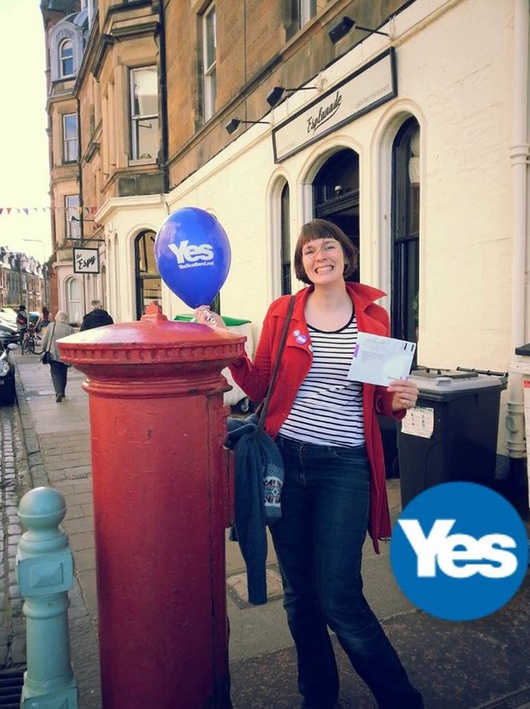 CB: You are English but got excited for the Scottish independence. How come?  CA: At the beginning it was like "I’m English, I don’t know if my voice really counts." But I realised that it’s not about not liking the English. It’s about creating a more democratic society. It expresses our dissatisfaction with Westminster which I believe is common throughout the UK. I think change is necessary. But my engagement was quite gradual. The more I read, the more I could see the merits of yes. A lot of people say "there’s your heart and your head." But, unfortunately, my organs weren’t speaking to me! With democracy, it’s good to be representative and accountable. Westminster is an old boys club, it’s run by many people who have gone to private school when only 7% of the population do. Do they understand the struggles of people living through recession?

CB: This referendum is bringing back the long lost faith in politics?

CA: It’s exciting. People know about politics. People are chatting on the streets. I learned more about politics in the last year than I have ever known. And I think that’s true of so many people. I think a quarter of a million of new voters have registered, that’s brilliant. Especially, if you consider that we only have a population of 5.3 million. It’s been positive for me to be involved. It felt like I have the power to change things.

CB: Do you think #ScotlandDecides will create a precedent for more direct democracy in Europe?

CA: We’ve had so much feedback from other countries seeking independence. There’s a whole Catalan movement supporting the Scottish cause. I guess they look ahead to us to lead the way. I think this is something that one should bear in mind, the fact that we are democratically choosing our own future, without bloodshed.

CB: An argument of Better Together is ‘independence is something for romanticists’ – are you?

CA: Maybe they’ve not met many yes campaigners? We have our share of romantics and cynics. There are business owners and investors supporting independence who would stand to lose a lot of money if that went wrong. They are not romantic to the point that they’d let their multimillion profits slide. 50% of Scots are not just made up of idealists. I’ve heard much more about blood and soil nationalism and William Wallace from the mainstream media and the no campaign, that we are all nationalists desperate to reclaim our country after 307 years. But we’re not tied up with the past – we want a better society. Now. And we’ve done our research.

CB: So identity is no part of the yes campaign?

CA: You don’t have to be Scottish or believe in some sense of Scottishness. The yes campaign is inclusive and counts people from all over the world. We don’t think that all of a sudden everything is going be wonderful. We’re not all singing the national anthem and waving our Saltires (Name of the Scottish flag — Ed.) in our living rooms, weeping anytime we hear bagpipe music. We will be working hard in a Scotland where our taxes are not spent on projects like Trident, but on healthcare or education.

CB: You’re a young job seeker yourself. What if you wake up in an economic horror movie tomorrow?

CA: Obviously, I could always smuggle myself in a large suitcase and come to Paris… I genuinely think that while short-term it may be difficult, long-term it’s utterly worth it. In this campaign, Scots have shown that they are committed, passionate and powerful. I accept that I may have to work hard – I’ll be working for a society which in the long term becomes fairer and treats its citizens with respect.

CB: Facebook says you’ll attend the Edinburgh 19th September Positive Scotland Party (Whatever the Result). What do you expect to celebrate there?

CA: If it’s the no, a lot of yes campaigners will be pretty devastated. And it might be good to share this devastation. Obviously, if it’s a yes, there will be a huge party. We’re living in anticipation now, it’s very strange. But division doesn’t necessarily have to breed bad feelings. If it’s a no vote, we’ll stay politically engaged. But that’s not going to be the end of the campaign for independence. It’s going to keep yelling. Devolution was one step and we didn’t get it straight away, only in 1997. But I would really like to see independence happen while I’m young. We’re part of history in a very real way and that is an amazing feeling. It could change the world and will definitely change our small part of it.