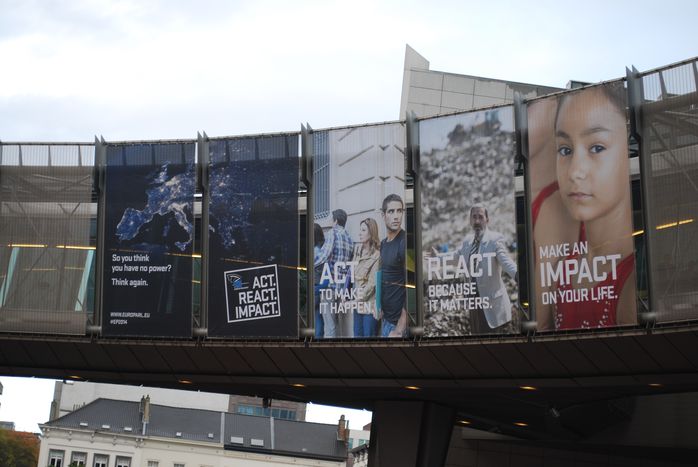 The idea of a united Europe has been challenged by critical voices ever since the project of European integration started. However, in the context of the crisis, the eurosceptic voice has got louder. The upcoming elections are important for the future of the EU as it's legitimacy is in question. A low level of voter participation is expected as well as many votes for eurosceptic parties

Unemployment, frustration caused by the tense economic situation and the feeling of having to pay for the behaviour of others are boosting the tendency of euroscepticism. Closely linked with the financial crisis is also a crisis of legitimacy of the EU. But how to tackle the problem of the democratic deficit?

The Lisbon treaty was an attempt to address this problem by strengthening the European parliament (EP), as it is the only institution that is being elected by citizens. The parliament now has more power in the legislative process and is electing the president of the commission (currently Portugal's Jose Manuel Durao Barroso). The next elections are taking place in May 2014 - the information campaign has already started.

However, it seems that many do not believe that their voice will have an impact on what is going on in Brussels. The upcoming EU elections pose a challenge to the legitimacy of the EU, as a very low level of voter participation is currently expected, as well as a high percentage of votes for eurosceptic parties.

'The low level of voter participation is mainly caused by a lack of information about the activities and the influence of the European parliament,' says Othmar Karas, vice president of the European parliament. According to him, the increase of information is crucial for the future of the European union. 'Parties and candidates on a national level need to be convinced to inform people of European policies. They need to comprehend European policies as domestic policies, and not play them off against each other. The joint responsibility of all European states is a lot less communicated than the assignment of guilt towards the EU,' says Karas. The policies of the European union are often working as scapegoats for national politicians. To communicate that the EU is not just about institutional decisions – far away from the grasp of citizens – but also about investing in every single region, is an important part of the campaign.

'Act. React. Impact' is the slogan of the information campaign for the upcoming elections. It was launched in the middle of September and has already garenered eight million views, according to Lieven Cosijn, press officer of the Belgium information bureau of the European parliament. 'The video is designed to attach people emotionally. It is also meant to be a bit controversial and teasing in order to get people to become interested and look for information about the EP.'

Playing with very different situations in the lives of EU citizens, the video aims to show that Europeans have a choice and that the parliament is aware of the wide range of needs. What is new about the information strategy is that it is organised in a decentralised way. The information bureaus in the member states are creating their campaigns relatively freely. 'A European public opinion does not exist. This is an illusion. The circumstances in every country are different,' says Conjin. This means that the information campaign needs to be adopted, according to the various situations in the member states.

Another important element of this year’s election campaign is the strong inclusion of the civil society into the information process. 'With the help of civil society organisations, everyone who is attached to such an organisation can be reached,' Cosijn says. People who are not part of civil society organisations, who are not using social media and who are not reading newspapers are rather unlikely to receive information on the European parliament directly. To attract as many people as possible, the Brussels information bureau aims to use playful ways of informing people. 'We have to avoid talking about politics. People cannot attach to information about political processes and structures – people are not interested in that,' says Conijn. A personalised story, a role play, or a visualisation of decisions that have to be taken are much more effective. This goal has been achieved with the video for the campaign: it certainly does not lack a dramatic athmosphere that reminds of a Hollywood production rather than of a political campain. Whether this outcome is really desirable is another question.

With the Lisbon treaty, the EP has become more influential in its cooperation with the EU commission in the policy making process. The motto 'This time it’s different' outlines these changes. But is it really different? Whether the adoption was enough to tackle the problem of the democratic deficit is questionable. 'Europe needs to work more democratically. A radical transformation of the institutions is needed,' says Niccolo Milanese, co-president of European Alternatives, an organisation with the slogan 'Democracy, equality and culture beyond the nation state'. Karas agrees; he also believes in the necessity of further adoptions of the EU institutions. 'There has to be a new Lisbon. We still need to work on a joint foreign policy and a joint budget policy. We need a convent on the future of Europe with a broad public discussion and the inclusion of all citizens.'