With his civic association the “Green Patrol”, Matúš Čupka wants to make life better in Slovakia’s capital city. His commitment takes many forms – but only a few follow his example.

You will usually find Matúš Čupka in his hometown, Bratislava, wearing wellies and overalls, holding a litter picker in his right hand and a rubbish bag in his left.  Along with the “Green Patrol” (Zelená Hliadka) he scours fields, gardens and parks for pieces of broken glass, discarded cans and other litter.

“Altogether, in 2013, we picked up 249 tonnes of litter. That was our record. My back still hurts,” he laughs. Matúš – who recently became a father – has cleaned up the city for the last four years.

The motivation for his litter-collecting campaign came from the Men's World Ice Hockey Championship, which was held near his parents’ home. Bratislava’s local government called on all its citizens to sweep the pavements in front of their own houses. Together with his brother, Matúš – then still enrolled as a European and International Studies student – he worked his way through the streets after taking a liking to the concept of a “clean city”. What remained a one-off for the residents of Bratislava became a matter close to Matúš’ heart, which would come to have an important role in his everyday life. 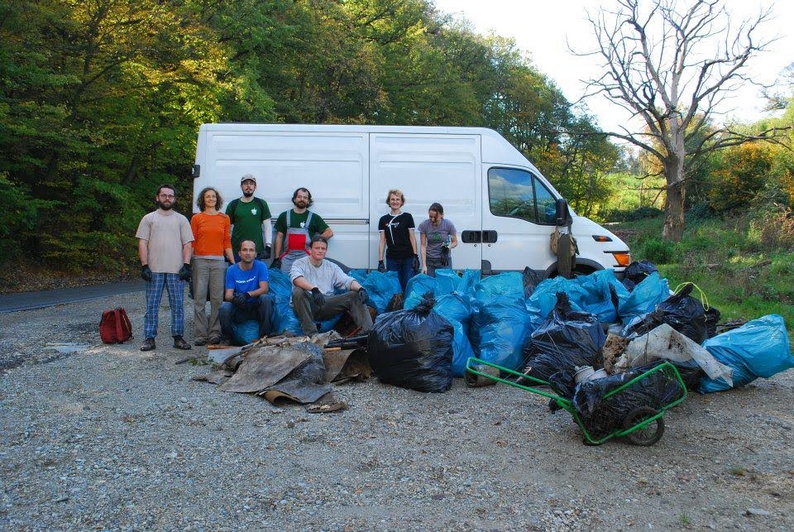 The motto of the “Green Patrol” association – “Lebo sa nás to týka” (Because it concerns us) – is now being lived out by more than 80 members, ranging from young people to the elderly, academics, the unemployed, activists and volunteers. Their work is not limited to collecting other people’s litter. They create gardens, remove illegal graffiti and replant neglected flowerpots that have been turned into ashtrays.

“I want my son to grow up in a city that’s worth living in, and that the people of Bratislava take more responsibility,” Matúš explains. But the response to the clean-up campaign remains limited. Many reactions from the public and local politicians have been negative. With comments such as “litter just comes back again anyway” and “it’s no use” commonplace, Matúš sees these people as trying to justify their own idleness; Bratislava is in sore need of some helping hands. It hurts to look abroad – 60 kilometres away in Vienna, 13 official landfill sites are in use, whereas there is only one in Bratislava. The result of this is illegal rubbish dumps in the suburbs, filled with car tyres and lubricating oil.

With regards to the UN Climate Change Conference taking place in Paris, Matúš appears modest. Some time ago, Matúš and his team set up 15 dustbins in heavily frequented areas of Bratislava. For the city’s politicians – whose philosophy is “no bins, no litter”, and “no benches, no homeless people” – Matúš Čupka is a thorn in their side: “My greatest wish for COP21 would be that the city finally empties its bins.”