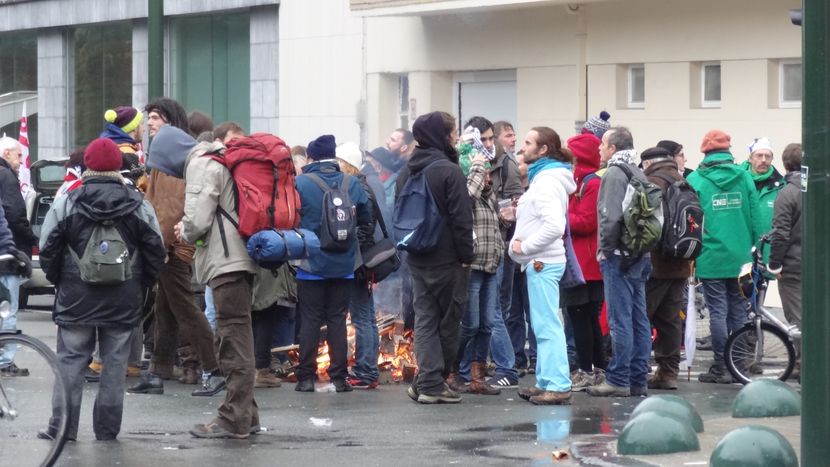 Marches in Brussels for a New Europe

On October 15th people from all over Europe organized themselves to gather in Brussels for a protest march in the margins of the European Summit. The Action Days last until October, 17 and include debates and workshops. Reasons for such gathering? Agriculture, climate change, public services, migration, but also TTIP and austerity measures.

Again, a protest in Brussels. Streets are blocked, policemen are guarding the area around Schuman station where the European Council is taking place. “You can’t go through here, there is a protest going on”, one policeman says. “Try over there!”, he adds, pointing to the next crossroad. Here's a place where you can hear some music, some speeches and fireworks.

Overall, the area around the summit stayed “pretty calm”, another policemen said. Except for some “usual suspects” who were already expected, nothing much happened. “Brussels is used to protests like this one”, he explains. So is this simply another demonstration? 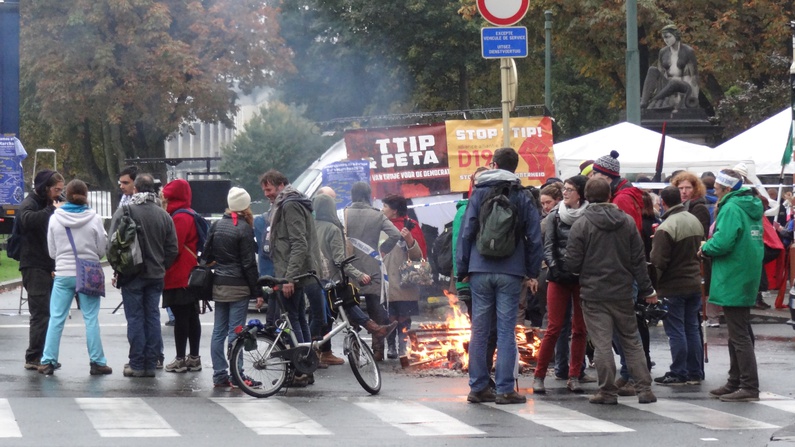 A group of activists is standing around a bonfire. A German man laughs and says: “I don’t know who put that fire on, but that would not be possible in Germany!” But it does not seem to bother the Belgian policemen a few meters away. The group is relatively calm and the atmosphere is cheerful. People from different countries and organizations are talking to each other. Within this mix of languages, we can also hear some Spanish. They are talking about their long trip to get to Brussels. One of them is Pedro Manuel Mir Moral from Malaga. The group started marching two days ago in Gibraltar, pursuing their journey with marches over Spain, France, Andorra and Luxembourg, with Belgium as their last stop.

A long way to join protest marches, but they want to participate to raise awareness on disagreements of many European citizens. The Transatlantic Trade and Investment Parntnership (TTIP), the Troika and the austerity measures are the focus of their protest. “It’s not democratic”, he emphasizes and explains that the system would not be “humanitarian”. Pedro describes his view on the situation in Spain. “Many people live on the streets”, he says. That’s why he wants to stand up for communist ideas, with a different role for the market and for the state. 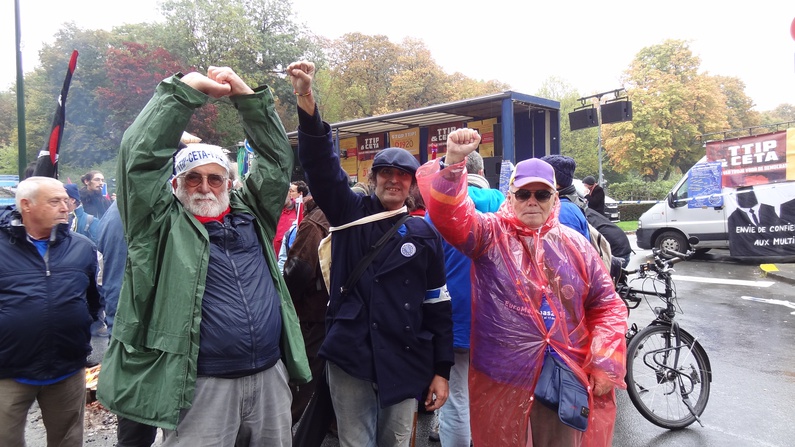 Others from his group join the discussion. Pedro Molero and Salvador Piquer explain that it is not the first time they join protests like this one. Many also went to demonstrations for 15-M or the Occupy movement. One main thing they want to show: “Another Europe is possible”, Pedro Molero says. His eyes are sparkling and he smiles. He describes himself as a social activist. Because contacts with politicians cannot be drawn, he wants to nudge European citizens for some attention and show that alternatives are possible. Despite being in the capital of Europe, citizens are not allowed to get too close to the “heads of capitalism”, he explains. Some of them tried to cross the fences, but the police stopped them and took twenty of their activists with them.

There is also a German woman from Wiesbaden. She came all the way to Brussels on her own. Now she is standing here and seems to enjoy the atmosphere whilst smoking a cigarette. She doesn’t feel the cold of this rainy autumn day, she says, after running a lot around the area to get to the protest due to the blocked streets. She later arrived at one of the places with the bonfire where some refreshments were provided. She explains that she does not want to represent specific political interests. She is here to take part in the movement, as she did before in demonstrations in Spain and Germany. For her, it is important to be present at the protests and interact with other activists. “You have to shake things up a bit. You have to reboot the system completely and start from scratch.” She is convinced that “life is not without its alternatives”. 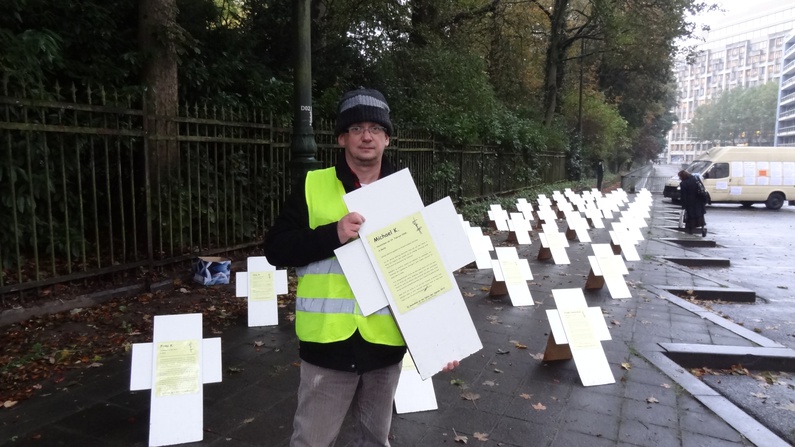 Michael Fielsch agrees. “The fall of the Berlin wall has shown that we do not need politicians to change something.”  He is here as the initiator of the ‘Cross campaign’ for the ‘Star march’, a march that started in different places and came together in Brussels. The campaign aims at showing how many unemployed are often confronted with precarious conditions under the ‘Agenda 2010’ reforms which impacts Germany's social welfare system. About sixty crosses tell the stories of people and their deaths, of committing suicide or of suffering from malnutrition. To avoid such tragedies, he wants to see the creation of a basic, unconditional income for all. He's backed up by Sascha and another person from his team, but also by other activist groups such as Attac Hamburg, who helped them organize and finance their journey to Brussels.

Sascha holds flyers in his hands which were translated in several languages, and explains the campaign to passers-by. Why is he here? “Self-determination”, he explains. Too many national and international decisions are implemented without citizen's agreement. Until they're heard, protests will continue. Michael adds: “I might be here for my own reasons, but to achieve these goals, I need to interact with others”.

This event shows that it is not only about the protest itself. The passion for its deeper meaning is what brings the people here: to shake things up, to interact and stand for ideas of an alternative Europe. A new Europe.