Mapping out Europe: The right is the new mainstream

A new study shows that nearly half of the European population hold populist views. As the rhetoric of the extreme right becomes more and more prevalent in public discourse, where do young people figure in the debate?

On 21 April 2002, Jean-Marie Le Pen - then the head of the Front National - made it to the second round of the presidential elections. The news shocked young people in France, who took to the streets in major protests - including some who went on to become major political players. Today, the "21 April Generation" includes ministers and other high-ranking politicians. The date, meanwhile, has become political shorthand for surprising, even downright dramatic events in French politics.

12 years later, it seems like every day is 21 April in France. And while the expression may not translate well, its effects are equally felt in Germany, Belgium, the UK, Austria, Italy, Denmark, Poland, Hungary... The word "dramatic" has almost become meaningless. The constant surprise at "catastrophic" events has slowly given way to an unavoidable observation of the European political landscape: support for the populist platforms has entered the mainstream.  According to a report by Buzzfeed, YouGov has revealed that nearly half of adults from 12 different European countries hold extremist views - views that are anti-immigrant, nationalist, conservative, and anti-European.

For 10 years, the spectre of the extreme right has hovered over European society, inviting itself to political discussions on the television, in the street or at the dinner table. It wasn't so long ago that elected officials were breathing audible sighs of relief on election night. Right-wing parties were garnering 20%, 30%, 40% of the vote without getting a seat, either because of the electoral systems being used (like "first past the post"), or because more centrist parties formed tactical alliances and coalitions to stop them. Young people constantly heard the shocking statistic that one in five of their mates would vote for a far-right party. But the feeling of shock only lasted a week, Europe's youth safe in the knowledge that the one mate in five was just an isolated idiot.

Then came Brexit, the rise of AfD and the referendum in Hungary, to name but a few. The extreme right may not hold much actual power in Europe, but it holds enormous sway over public opinion. It's now the mainstream, the debate dominated by right-wing parties. In the case of Brexit, the Leave campaign fulfilled every criteria of what YouGov calls an "authoritarian populist view" - anti-immigration, nationalist, conservative and anti-European. And in a study of 12,000 people from across the continent, YouGov found that 63% of French people, 47% of Italians, 48% of Brits, 49% of Danes, 50% of Finns, 55% of Dutch people, 78% of Polish people and 82% of Romanians hold these views.

Young people were not the focus of this survey, but even among young people it is surely only a matter of time? We've aleady seen how 18-30 year-olds are increasingly turning to the extreme right (in France, 34% of them voted for the Front National in regional elections in 2015). As debates on the European Union, immigration and unemployment dominate election campaigns in the Netherlands, France and Germany ahead of next year's elections, who's to say how many more people will turn to the right? And when the time comes to take to the streets against a new "21 April", how many young people will join the ranks of protestors? 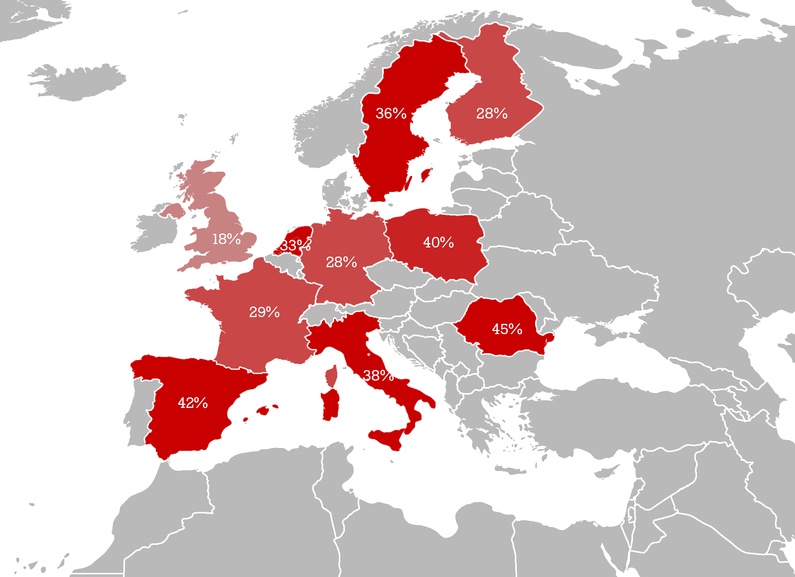 This article is part of our Mapping out Europe series: charting the stats that matter to Europe, one map at a time.