Map of the Week: University fees in Europe

Application season is long over; now students are desperately waiting to see whether they'll be offered a place at university. If Mum and Dad don't have the funds to help you, you should avoid going to England to study: that's where the tuiton fees are highest.

Free education has always been a hot topic in Europe - it's a fundamental part of our values. Here we can study for almost nothing, can't we? After all, we don't live in the United States. But in order to get a university degree without spending too much, you still have to choose a university very carefully.

At the European level, it's in England where tuition fees are the highest at 9000 pounds per year (approximately 10.600 euros), after David Cameron's Coailition government tripled the tuition fees. Not astonishing knowing that the former Prime Minister comes from prestigious (and expensive) schools such as Eton and Oxford.

In 2012, that fee increase gave rise to heated debates, and the number of registered applicants at English universities decreased. In addition, we have learned this week that British students are no longer entitled to housing allowances and instead must resort to additional loans. You can thank George Osborne, the young ex-Chancellor of the Exchequer (and another graduate of Oxford), for this latest measure.

Nevertheless, Great Britain remains one of the most attractive countries in terms of education - even if studying is almost free in many EU countries such as the Scandinavian countries, in Germany or in Greece for example, as shown in the "Eurodyce" map below courtesy of the EU Commission. 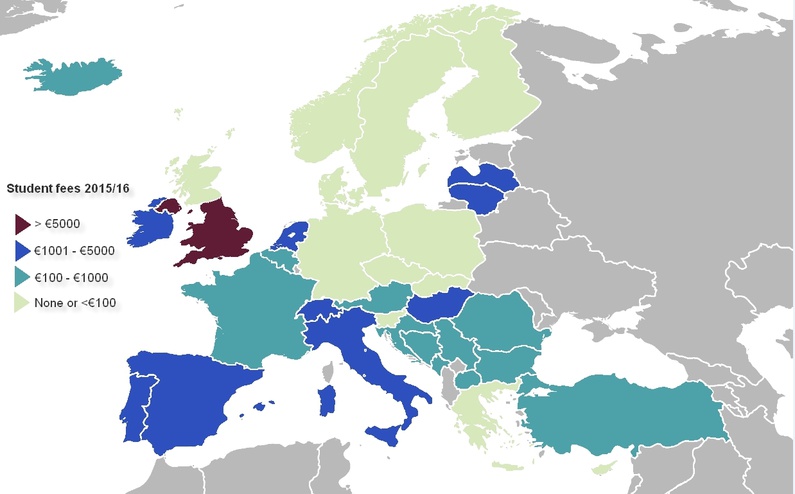 Translated from Map of the week: Studiengebühren in Europa