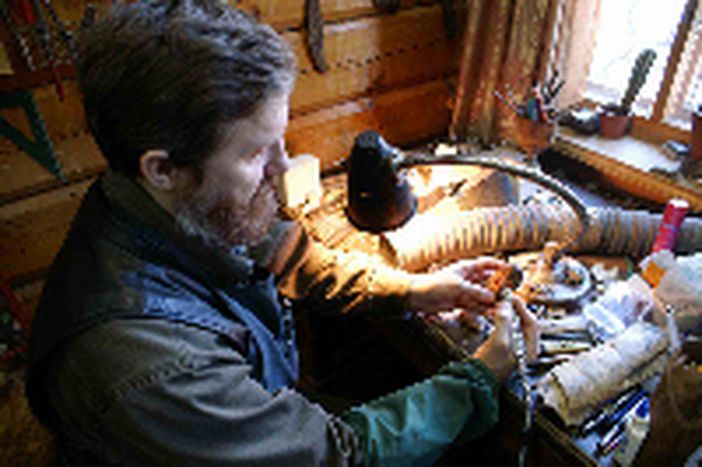 It is warm and comfortable in the small room in the basement of the Siberian culture centre in Omsk. Nikolaj Peristow pours some tea and leans back in the old, shabby rocking chair. The 49-year-old Siberian, with a full beard and twinkling eyes, lets his gaze sweep the room. On the table and the sofa stand sculptures. One of them depicts Ice Age people battling a sabre tooth tiger. The silhouette of a woman stands out against the dark background of a piece of tusk. On the ground lie ancient bones, scavenged from the earth around the region of Omsk.

Thirst for the Romantic

“Siberia is the birthplace of mammoths,” says Peristow. The climate here was colder than anywhere else during the Ice Age. Every summer when the water table of the rivers sink, the “mammoth man” undertakes archaeological excursions in the south of the Omsk region. Most of the mammoth skeletons he finds lie on the edge of the river or on the bank itself. Thanks to his experience, the search is fruitful. “There are people who think that you can establish certain rules; for example, that you can find mammoths in places where lots of mushrooms grow,” says Peristow with a smile. To him, that makes no sense. “In the end, the only thing that helps is the intuition you develop over the years.”

During his excursions, Peristow always brings along four to six of his students, young people who out of professional or personal interest, want to learn about the recovery and processing of mammoth bones. There is indeed a certain “thirst for the romantic” in these excursions, explains the artist. “We find ourselves in places where people have seldom, if ever, set foot. The natural environment is stunning and undisturbed.”

It was on a similar expedition that Persitow developed a fascination for mammoths. In the 1980s, he travelled in northern Siberia with a group of scientists and a film crew, to shoot a documentary about Stalinist gulags. During this trip, Persitow remembers, he stumbled across a bunch of mammoth bones. They were white and preserved in permafrost. By contrast, in the Omsk area in Siberia’s milder North West, the bones have absorbed different layers of colour from the ground soil, over thousand of years.

Nikolai Persitow gets up and goes over to his studio table. Beside small carving tools and cutting machines lies the artist’s raw material, some rough, some already polished. He seizes a piece of smooth tusk and points out the different types of shading. Brown, red, black – the bones look like pieces of fossilized wood. Actual year-rings make it possible to recognise different layers which have developed in conjunction with the soil over centuries. Peristow works on bringing out certain flaws or features. The fine carving tool begins purring gently. The artist and craftsman carefully strokes the curves of a small sculpture. “Mammoth bone is harder than marble,” he says meaningfully.

The special structure and colouring of Omsk’s mammoth bones are not the only reason for the enormous popularity of Nikolai Persitow’s art pieces. For hundreds of years, mammoth skeleton have been associated with magic in Russia, thought to bring good luck and to protect the owner from sickness and misfortune. It was not for nothing that many Russian Tsars sought after this type of craftwork and ordered jewellery and other objects out of mammoth.

Nowadays, Persitow is the only artist in Russia who works with this ancient material. In Germany, the bones in his studio would more likely end up in a museum. In the Russian Federation, however, there is no law banning private collections of mammoth bones. “You are simply not permitted to take the bones and tusks out of the country,” explains Peristow. “At least, not in an unprocessed state.” For processed art pieces, the situation is different. Thus the mammoth artist has already shown his work a few times abroad, with exhibitions in France, Luxembourg, Switzerland, and Scotland, among others.

But can he actually make a living from his art? “For the meantime it’s really quite good,” says Peristow. During the Soviet era, the native of Omsk worked in the local administration and studied at the Pedagogic University of Art and Graphic Design. “The mammoth art was always my passion, though,” he adds. In 1990, he finally turned his hobby into a profession. Since then, the artist has lived primarily thanks to his reputation and by word of mouth. “The Germans, in particular, are wild about mammoth,” he says.

“Our lives are only infinitesimal points between the past and the future,” says the mammoth man almost philosophically. Working with these ancient bones has made that even clearer to him. “It is important to put these little points to good use, not just to live for oneself. The relationships between people, good friends and family – that is what’s really worthwhile,” he adds, contentedly. That is clearly what is important to him. The mammoth bones, split into pieces in the corner of the studio, seem to whisper stories of a Siberia long before our time across the room.