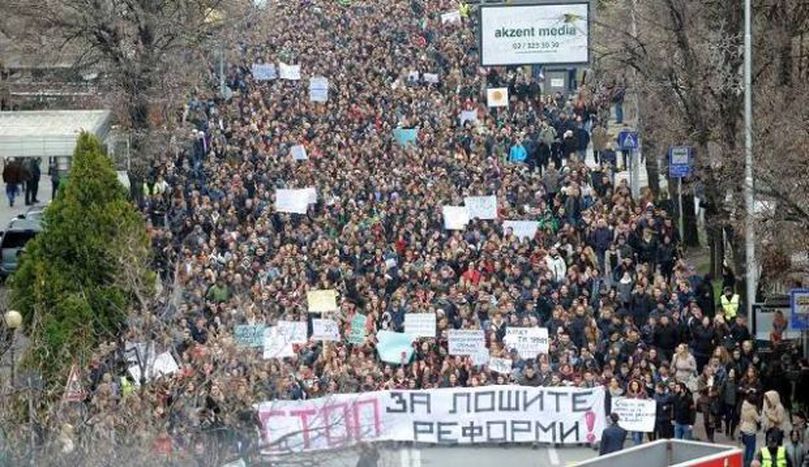 New educational reforms encompassing external state-supervised exams that have to be taken by all students before they complete their studies moved the academic community in Macedonia at the end of 2014. As the law was presented to the public and was planned to be introduced in 2015, a new non-formal students’ body was initiated, named Students’ Plenum (Studentski Plenum).

New educational reforms encompassing external state-supervised exams that have to be taken by all students before they complete their studies moved the academic community in Macedonia at the end of 2014. As the law was presented to the public and was planned to be introduced in 2015, a new non-formal students’ body was initiated, named Students’ Plenum (Studentski Plenum). In a short time span, the student body managed to mobilize massive number of students and youth who would support the movement against the introduction of the new law and against alleged government interference in the academic system.

According to the government, the introduction of a new law will improve the quality of the higher educational system. As Students’ Plenum agrees that measures for improving the quality of education should be taken, still they do not identify the state-supervised exams as a measure that is actually able to achieve that. The student body calls on full withdrawal of the law and crafting a new and better one where also their suggestions will be truly considered. 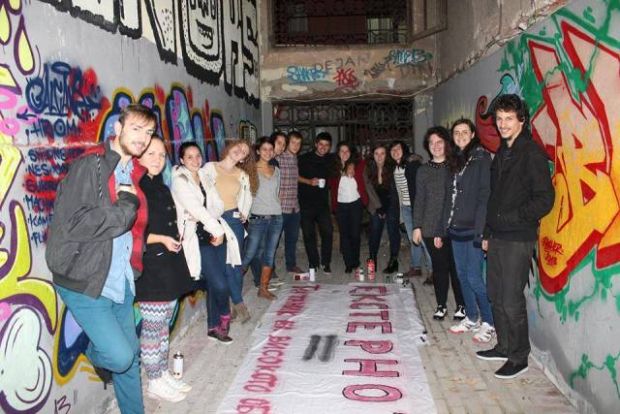 “Observing the new law, as students’ body, we can identify a string of irregularities. The very proposal of it has not been clear enough. No previous analyses has been executed before its introduction and we do not think it resolves any concrete problems concerning the quality of the higher education,” states Zorica Dimitrova, representative of the Students’ Plenum.

Since its activation in November 2014, the Plenum has set several protests and actions. Thousands of youth, accompanied by many of their professors have joined the initiatives and have overcrowded the streets of the Macedonian capital, Skopje demanding autonomy of the university and withdrawal of the newly proposed law. Since February 11th, 2015, the students have started also to officially ‘occupy’ the faculties in Skopje proclaiming them as “autonomous students’ territories” and offering daily program and activities opened for the students. 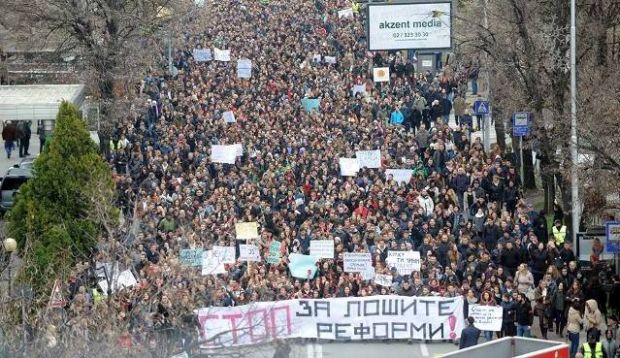 But, what is the root cause that sprouted all the engagement of the Studentski Plenum? Zorica answers:

“The Ministry of Education has proposed law changes influencing the high educational system in the country. The law changes, among other, predict obligatory external testing, a form of a state-supervised exams for the students in order to evaluate their knowledge, aiming through the introduction of such testing to strengthen the quality of the higher educational institutions. We, the Students’ Plenum, believe that a reflection on such changes has to be made in order not to violate the autonomy of the university and the right of the students to choose their education. We can rather conclude that:

First, it’s the constitutional right for education that is being threatened. Disbursements also follow each new testing if you are to fail the exam for a second time. This affects the budget of the student. Secondly, the disbursements could create elitism in the higher education as students facing economic problems will be excluded from obtaining their studies. Thirdly, the move that the ministry is to implement the evaluations of the knowledge of the students discredits the capacity of the faculties and their staff members to establish their own methodology in the grading.

And finally, the proposed changes are not in alignment with the Bologna Process. The Bologna’s book of rules says that each faculty selects the grading methodology itself and final grade for the student is formed on wider criteria spectrum included lessons attendance, class activity of the student, essays and seminars works, colloquies and exams. Contrary on that, the state supervised exam is a single test that should evaluate your whole knowledge.” 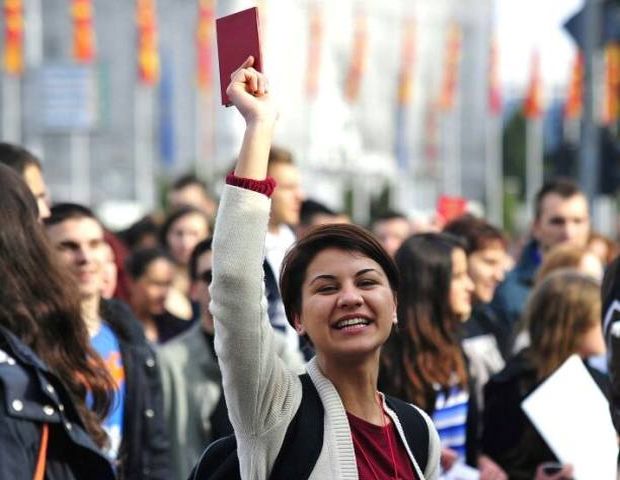 The Students’ Plenum agrees that the Macedonian student faces numerous problems. Those include by large extent bad living conditions in the students’ dormitories; high expenses for signing up single exam and other fees; no free city transport for the students; almost zero support available for participation in seminars and sports and cultural events. Added to that, the students lack technical aid that should ease the studying and the practical work of the students, and the non-existent funds for scientific-research work. For them, these are all problems that actually tackle the quality of the higher education. The revolt of the students was growing for a certain period of time and the suggested state-supervised exams were the last drop, they said.

“One of the most massive mobilization took place on 10th of December where more than 12,000 students went on a ‘March Against the Bad Educational Reforms’. All activities were conducted peacefully, expressing the disagreement of the students in a democratic way. With the protests, the students stood loud against the proposed changes,” contemplates Zorica on one of the major events of the Plenum.

“We have signed letters of support from many professors, authors, philosophers, writers and intellectuals in general from all over the world. Some of the people that gave their support for us are professors such as Judith Butler, Slavoj Žižek, Jacques Rancière, Alain Badiou. In their letters of support they expressed their concerns regarding the breach in the university autonomy and the government’s attempt to control the institutions of higher education, as well as the fear of the catastrophic consequences these law alterations could have on the academic reality in Macedonia,” adds Gracija Atanasovska, also representative of the Students’ Plenum. 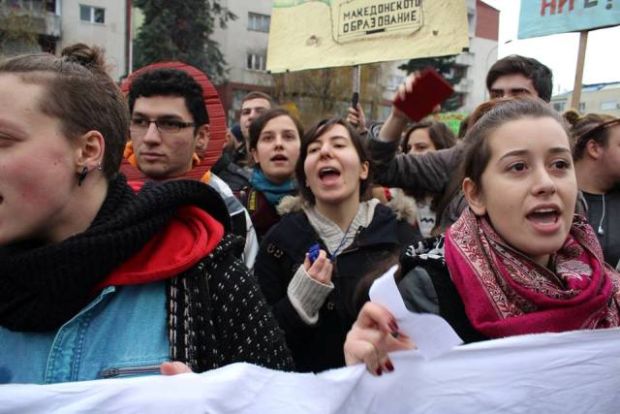 Answering on how she revives all the recent events within the Macedonian academic community, Gracija says:

“I think that the most important thing about the success of recent events  is precisely the fact that all of  it was and it still is a collective effort, a singularity of energy that had been accumulating for a long, long time in Macedonia. What is important, I think, for people to understand, is the fact that when something is wrong the logical step that follows is to fix it – not to descend in apathy as it had been the case before, especially regarding student issues, but rather, to take some action, participate in the change you want to see. People need to understand that it is indeed possible to induce that very change, to be a part of it and to actually see it happen. Once they start to picture that in their minds as the very reality they see in front of them and start believing in it, that is one of the moments when they realize how free they actually are, how free we all are and ready to act.”

Students’ Plenum has confirmed that the youth everywhere in the world should present a critical thinking group that must be a corrective of not only governments, but whole systems. Through such movements, students send messages that they should not be an isolated group in the society, but leaders of changes and advocates of improvements in their communities.

Recent update: As authorities have announced that they withdraw the proposed reforms in education and that a new law will be introduced in future that will also engage students in its creation, the Students’ Plenum have stopped the “occupation” of the faculties. Nevertheless, the students are still keeping the autonomous zones active, offering a daily program with activities, lectures or other activities complementary to the traditional curriculum running at the faculties. The program usually takes place after lectures.