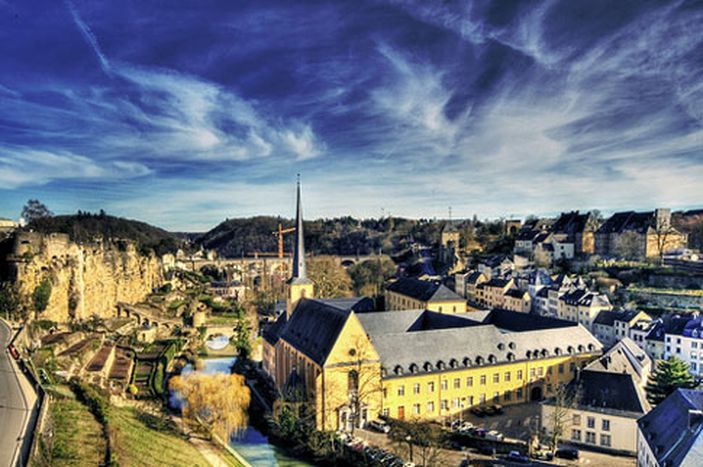 'All these companies who want to save money are the reason that Luxembourg has a bad reputation as a tax haven in Europe,' says a Luxembourger man in his fifties who is standing at a bus-stop. 'We are not very far from a second scandal like Liechtenstein,' echoes a passer-by, whilst another Luxembourger in the street called Lisa tells me that the average citizen actually doesn`t care as long the state is making enough money.

Luxembourg’s citizens are aware that their economy has thrived because of the attraction of its fund industry as an uncontested leader on the pan-European market for worldwide investors. However the attitude of the government is completely different. 'We do not consider ourselves as a tax haven,' the prime minister’s spokesperson said in February.

Situated in the heart of Europe, it is well known the Grand Duchy, one of the founding members of the European Coal and Steel Community and richest member states of the EU, derives its prosperity partly from its status as Europe’s number one investment fund centre and as the world’s leading hub for global fund distribution. But how is life in paradise after Germany`s tax evasion probe against neighbouring Liechtenstein in February 2008?

Together with Belgium and Austria, Luxembourg remains an exception because its laws prohibit revealing bank information to the outside world, except in criminal matters. In the Financial Times on 19 February Angel Gurria, the head of the Organisation for Economic Cooperation and Development (OECD), called bank secrecy ‘a relic of a different time.‘ During the Reuters Funds Summit exactly a month later, the Grand Duchy’s Central Bank governor Yves Mersch described it as ‘part of our social consensus. Confidentiality in a small country is extremely important for the maintenance of democratic rule. In larger countries you can have checks and balances through a multiplication of institutions which control each other.' In the same meeting, the Grand Duchy's treasury minister Luc Frieden added that ‘the system of withholding tax works well. We transfer quite an impressive amount of tax to other member states of the European Union. We should not change things again that work well.'

Some people see Luxembourg as a place harbouring dirty money. They use bank secrecy as a shield against the European authorities to control what is happening within its borders. ‘A clear distinction should be drawn between tax avoidance and money laundering,‘ says a lawyer based in Luxembourg. 'It is a question of perspective. The fight against money laundering where the origin of funds is coming from gun smuggling, drug trafficking, and so on, is different than avoiding tax. In Luxembourg doing this or failing to report earned income is not considered a criminal attempt as it is considered in other countries. Luxembourg‘s funds are authorised and supervised by the financial regulator, the ‘Commission de Surveillance du Secteur Financier’ (CSSF). If banks or other professional have the slightest suspicion about a transaction, it is under obligation to inform the respective authorities without delay.'

Could the country risk another scandal as with Bahrain International Bank, who transmitted funds through non-published accounts of Clearstream, the clearing division of Deutsche Bank? At the time it was considered as one of Luxembourg's major financial scandal. 'Luxembourg’s government sees no need and will not come up with new proposals to change the bank confidentiality rules; they have proven to be in the interest of a good working system in Europe,' said Luc Frieden during the Reuters summit.

It seems that every reaction causes a counter-reaction. Competition is not sleeping and other European countries have reacted and will react to countries in future who are providing the services posed by fiscal paradises by improving their own tax regimes. Britain and France have reacted immediately offering tax benefits to long-term savers if they keep their money at home.

Even in paradise there is no guarantee for anything.