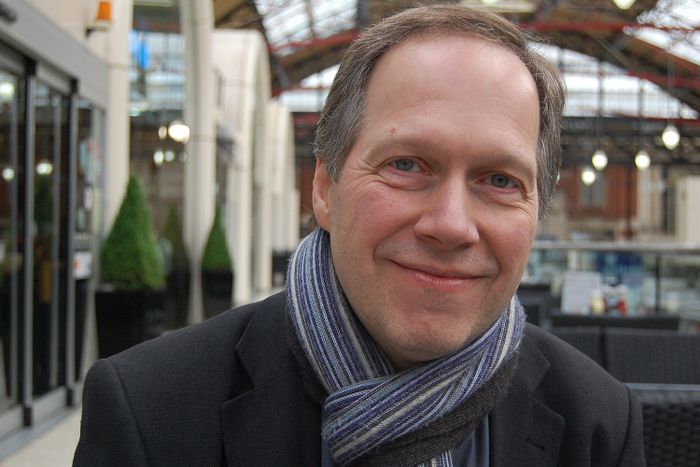 I meet Ludwig Steinherr almost coincidentally at a European poetry evening at the StAnza poetry festival. The German poet comes across as charmingly shy, smiling in an apologetic but altogether good-natured way

One of the themes of discussion at the reading is the extent to which it is possible to talk about European poetry. Ludwig had been reading next to Robert Şerban, from Romania and the different contexts in which the poets write were to some extent reflected in the work they read. Ludwig comments, ‘I think there probably is more of a European poetry than – ‘ He breaks off. ‘We saw tonight that Robert writes in a very different way to me, but despite the different literature there is a bigger context. Among other things the internet is guilty of that’ – he laughs at the word guilty – ‘but I think that there’s a good side to that.’

We had particularly discussed the extent to which there is a discrepancy between poetry in Western Europe and that from the former communist bloc, with Robert Şerban’s poetry coming across as distinctly darker than that of Ludwig. The East-West issue of course plays itself out in miniature in Germany. While living standards and the political landscape of what was East Germany no longer have much in common with other formerly communist countries, the generation of poets who are now in the spotlight came of age while the country was still divided. ‘That’s less and less a-‘ starts Ludwig, but then interrupts himself. ‘At first, that was of course an issue. In the East there had practically only been two kinds of literature. That which was publicly funded – the literature which was true to the state, and that of the dissidents, who opposed the state. The breaking together of the GDR meant the end for both groups – for the publicly funded poets on one hand, and on the other hand the people who had so to speak been the opposition to a certain extent lost their function. That was very plain to say. The people who really had something to say didn’t have a problem, but even some writers who were undoubtedly very good writers were no longer quite understood after all of the changes.’

Indeed, an argument put forward by one character in the film The Lives of Others, which examines the role of writers in the former German Democratic Republic goes as far as to say that while art and poetry had a critical social function (and, indeed, a socially critical function) under communism, they lost both influence and audience in the capitalist, united Germany. Although admitting that the reach of poetry is limited at the moment, Ludwig seems anxious to defend both poetry in general and contemporary poets in particular. ‘Of course the audience for poetry is small, but that was always the case – even in ancient Rome there were only eight copies of some poems. These were just passed between the very few people who could read – and that was when times were good. In Germany there was really only the time of Rilke, when a lot of poetry was read, and then shortly after the war, when the people were starving – but that was only very briefly.’

We both laugh slightly awkwardly – someone at the reading had claimed that people turn to poetry when they have no shoes. Perhaps there is some truth in the expression.

Ludwig continues. ‘No, poetry certainly doesn’t have a direct or great influence on society – but indirectly it does of course influence society in the long term. Those Roman poems which were copied out onto eight manuscripts are still being read and are still relevant today.’ He shrugs slightly and smiles. ‘I think that for a society to function we always need some people to busy themselves with poetry.’