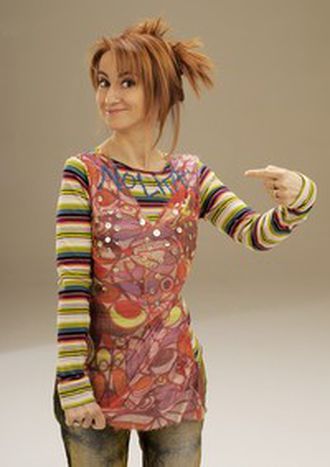 Writer, actress and ‘TV jester’ – Luciana Littizzetto has made a career from her own irreverent brand of self-parody – with great success

Landing in the world of entertainment after nine years spent working as a music teacher, Littizzetto has made audience numbers soar for the wide variety of TV and radio programmes she takes part in. The daughter of a milkman, she trained as a pianist at the Turin conservatoire and later studied literature before becoming the comic star of TV light entertainment she is today.

And she is much more than that – Littizzetto is also the author of a series of novels with less than subtle titles, such as The Princess and the Pea (pisello in Italian having a second, slang meaning that has nothing to do with vegetables). In 2006 she published Revirgination, discussing the cosmetic surgery trend for returning to a ‘chaste’ state: ‘A few minutes work and voilà – you are once more as pure and innocent as at your First Holy Communion. It’s a bit like winding back the mileage when you try to sell your car,’ she writes.

Littizzetto talks about anything and everything. Her best material is when she describes amusing aspects of everyday life: from the age-old question of men’s underwear choice – boxers or briefs? – to the problems faced by desperate singletons in search of love. But she doesn’t neglect the bigger issues – even politicians don’t escape, from Prodi to Berlusconi, via Vatican big-wig Cardinal Ruini who she affectionately calls Eminens (‘Your Eminence'), whilst sitting cross-legged on presenter Fabio Fazio’s desk during the popular prime-time show Che tempo che fa (see video below - in Italian)

When did you realise that you could make a living from your sense of humour?

There was no one sign, no ‘road to Damascus’ moment. No, I didn’t get ‘the call’, but there were a few clues. Even as a little girl I loved reading and listening to the radio. I wanted to be an actress in radio plays. In those days not everyone had a TV and we always listened to the radio. When I was off school because of my troublesome tonsils I listened to these nuggets and said to myself ‘When I grow up I want to be an actress.’

I loved to act, even though it was just for fun with my classmates, and our teacher was kind enough to allow me to do so every now and then. I would have liked to have gone to drama school, but my family let me have the piano playing and that was all. Once I finished at the conservatoire I finally enrolled in a theatre school and there, armed with my determination and conviction, I got started.

You’re like a whirlwind, always working. You always have a joke ready, but what is it that really makes you laugh?

Family gatherings make me laugh a lot. Especially my aunts, who live in their own little world that I still can’t really understand. My relatives are very serious but at the same time completely off the rails. They have serious jobs - doctor, teacher, office worker - but within their ‘perfect’ lives they are actually all a bit crazy. They have been and will always be a source of inspiration for me. A lot of the time comedy happens around the dinner table, that’s where a lot of my sketches and characters are born.

What makes you angry?

I get very annoyed by intolerance, by human beings’ failure to put up with each other. I can’t understand why people get angry in the car, in queues, at the post office . . . why they fume with rage over some silly little thing. That I find truly humiliating for the human race. I also get annoyed by stingy miserable people, people who stay closed up in their own world and never contribute anything. And by the pretension of men in believing they are always right! At some point you have to realise that you are not always right. You have to learn to know your limits and to know how to say sorry, or even just to have the courage to admit you have made a mistake.

What are the essential qualities of a good comic?

Above all talent, and knowing when it is necessary to put on the comedy mask on and when to take it off. A good comic is not a comic twenty-four hours a day. You have to be respectful of other performers – everyone must have their own time and space, that’s sacred.

Comics must also know how to reinvent themselves and not be limited to copying other people’s acts. Then of course there is the question of personality – having talent is not enough. You have to be stubborn and persistent and not throw in the towel as soon as it gets tough. It is not easy for a woman in this profession so you need to be determined and unrelenting, and these are character traits that have nothing to do with your acting skills.

If you had to move and live abroad, where would you like to live?

Lisbon. Just because I’ve never been there and I like Fernando Pessoa’s poems that are set there. They give the idea of somewhere rather melancholy where I could really feel at home. But it’s just the idea that I like – maybe that’s why I’ve never been and don’t actually want to go. I prefer holding onto my dream of the place, if I discovered that it’s not like imagined it would be let down. Or maybe I would choose somewhere in Spain.

Who are the sexiest men in Europe?

Spanish men I think, because they’re a bit crazy like us Italians. They’re warm, open, a bit artistic and I like how direct they are, they love having a party and making the most of life.