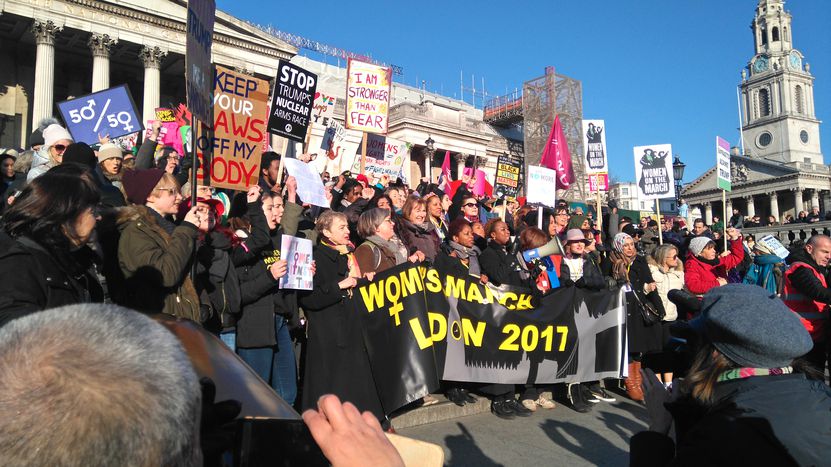 London: Guys who march for their moms, wives and daughters

As thousands of women marched in London to protest the new President of the United States, they brought children, parents, boyfriends and husbands.

The Women's march has reportedly gathered millions of people around the globe just one day after Donald Trump's inauguration as the 45th President of the United States of America. The Daily Mail estimates that around 100,000 people joined the march in London.

As women protested, also many men attended the rally and opposed the new President of the USA. Here's why 6 of them attended the march.

Philip, 7 years old, London: "I came here today because Trump is bad for women. He says very terrible things about girls on TV so me and my mom came here today to show to tell him that he can't say those things."

Ed, 47, London: "Well, this man is a true nightmare to everyone on the planet, especially for women. I came because, in a way, I felt like I needed to show women my support. I brough my daughter with me, she's still too young to understand what's going on, but I am here for her too. Hopefully she will learn that Trump is just abnormal and we can never normalize anything bad he does anymore. We've had enough".

James, 23, Bristol: "My girlfriend brought me and it's a pleasure to be here. But it's sad that we still have to protest something like this, isn't it? I mean, it's 2017! Women have had it way harder than us since the beginning of times and now that we're making progress, this guy attacks women viciously and gets away with it! It's just unbelievable, but we're here to fight".

Cole, London: "It's a bloody disgrace what this man has done and said. How he got elected he will never understand. But all these powerful women are here to show him that they are stronger than he thinks. I'm just here trying to do my part".

Yussuf, 35, London: "Women are amazing and the fact that someone can treat them so badly and now he's President... I have a mom, she's here too and I'm just so proud there's so many people here. I hope it sends the message".