Some days before, unprecendented riots took place in London. Students were really mad about the government and the increase of the tuition fees which from 3,000 pounds were actually ..tripled to 9,000 pounds per year! 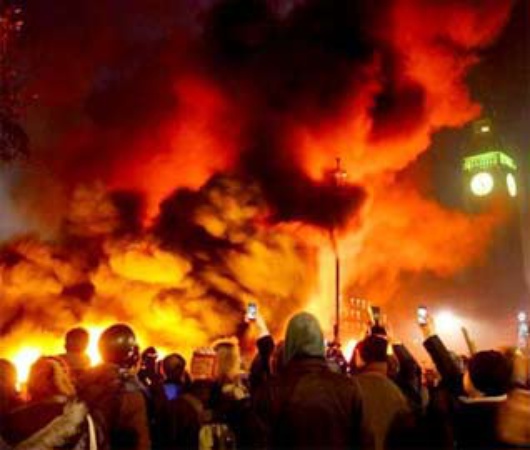 You cant imagine what Westminister was like during the riots:

the Tube station was closed, fires all around the Houses of Parliament, the students vandalized Winston Churchill's statue and some of them attacked Prince's Charles car, which was heading to West-End. The newspapers here were describing a chaotic situation- was the headline of London's Evening Standard.

The London School of Economics was occupied by the students during the riots and the students tried to break in government buildings.

For a young Greek student like me, all these could only remind me of the 2008 riots in Athens, and our live coverage in our dossier.

Two years ago, huge riots took place in the Greek capital, due to the murder of a 15-year old boy, Alexandros Grigoropoulos by a police officer. The result: students occupied the university buildings, the tube was also closed, statues were vandalized, shops were destroyed in downtown Athens.

Yet again, the foreign media were broadcasting a chaotic situation in Athens. Furthermore, the local media were describing the situation like if Greece was a third-world country.

Two entirely different stories, which however stress one thing: that young people are active when it has to do with politics, and especially when injustice prevails, such as the Grigoropoulos case or the rise of the fees in the UK.

Although in a totally different context, both cases where regarded by the respective youth as an ''attack'' against them.

However, as a Greek I have to stress a huge difference: never in my life, I have witnessed such a ''civilized'' demonstration both by the protestors and the state. The students at the LSE, although they had occupied the Old Building, they didnt prevent the School from operation as in Greece,

where even without a reason a small group of young people occupy a School to ''protest'', preventing anyone from entering.

Instead of sprays which destroy the buildings, the artifacts and the public space, Some may stress that this makes them ''less revolutionary'' or ''fake'', however these students show that they appreciate a clean campus since they pay huge amounts of money for it and they spend most of their time there to study. On the contrary, Greek students regard public property as an ''enemy'', as something hostile to their rights.

the students in London used chalks to write in the walls, so that they would not harm their University. They pay indirectly for the education thus, they dont understand how it is to spend 3,000 to 20,000 pounds to finance your studies, and as a result they do not want to protect their campus.

Lastly, during the protests in Westminster, I ve witnessed a ''shocking'' picture for a Greek in London.This is simply, where after a riot the city looks like Bagdad and the cleaning vehicles come a couple of days after. 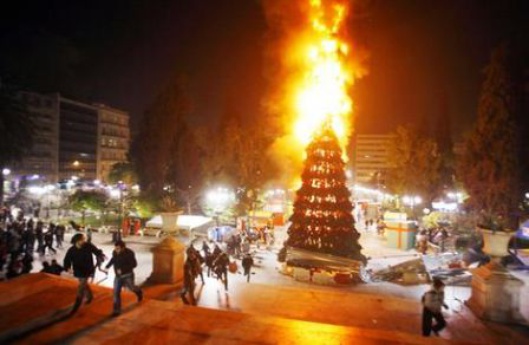 Just after demonstration an army of cleaning vehicles followed them in order to clean what they have left behind, so that the city will be clean again. 'non-existant' in AthensAnd this is what I call ''civilized people''.

If you compare the two demonstrations, then I think that Greece has a lot to learn from the UK, where there is a totally different concept of the police and the state. In London the public space is not something hostile to the citizens but an extension of the private space. And this was also the case in Greece some decades before. I cant analyze here the reasons for this swift,

however it is for sure that Greece has to follow the UK example.