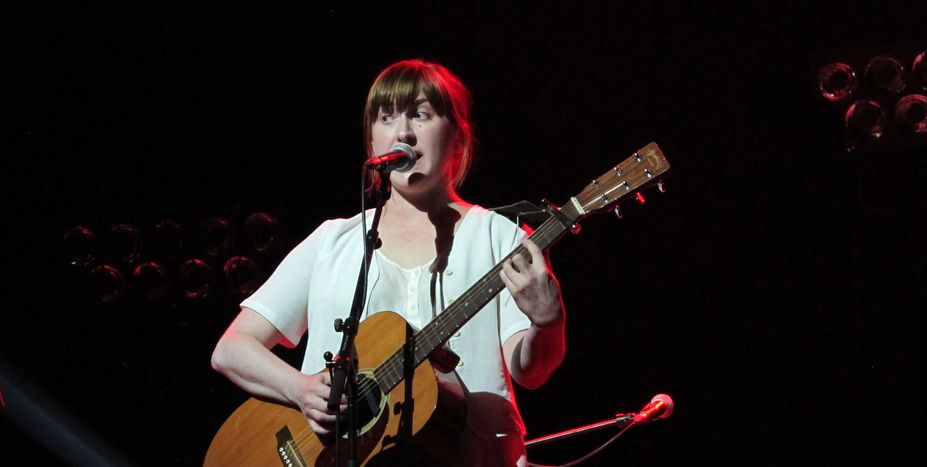 Liz Green, the Singer that Wanted to Lead a Normal Life

During the latest edition of the Europavox festival, I had the opportunity to talk with the singer Liz Green, and what at first I predicted would be a calm chat full of good cheer ended up becoming the most depressing interview of my life. I present to you, Liz Green, the talented and innovative singer-songwriter from Manchester that only wanted to live life like a normal person. 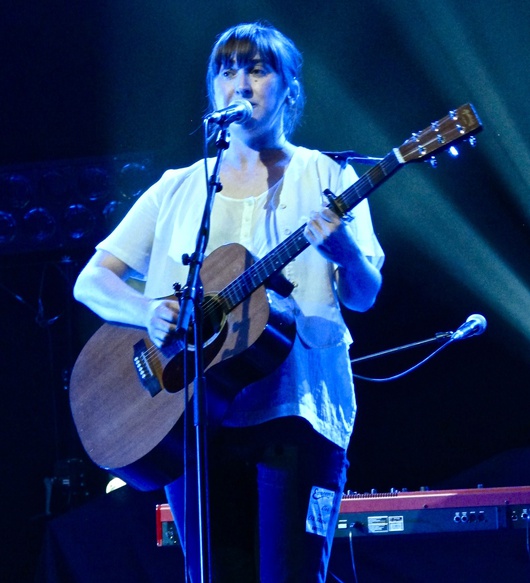 I find my­self with the British singer-song­writer Liz Green shortly after her con­cert at Eu­ropavox Fes­ti­val in Cler­mont-Fer­rand (France). The singer from Man­ches­ter just gave an in­ter­view and I re­al­ise that she seems tired to the naked eye. She just stopped play­ing an hour and a half ago and there have been sev­eral of us jour­nal­ists that have waited to be able to talk to her. She hasn't even changed her clothes. I sus­pect that she wants to go to her hotel and relax a lit­tle, but work is work. I'm not an ex­pert in mu­si­c cul­ture (not by a long shot), nor could I imag­ine that car­ry­ing out an in­ter­view with a folk singer would end up being so com­pli­cated. After all, Liz has a great sense of hu­mour. I spoke with my fes­ti­val col­leagues (the ma­jor­ity being jour­nal­ists spe­cial­ised in music) to get some ad­vice and I finally de­cided that I would carry out a nor­mal in­ter­view, try­ing not to med­dle in any touchy sub­jects, to pro­vide Cafébabel read­ers the chance to get to know this Eng­lish promise a lit­tle bet­ter. The mu­si­cal ca­reer of Green, who used to work at a book­store, took off in 2007 when she won a mu­si­cal com­pe­ti­tion in Glas­ton­bury. From then on, the artist from Man­ches­ter was mak­ing her­self more and more well known, but it wasn't until 2011 when she re­leased her debut album, “O, de­vo­tion!” that she crossed the thresh­old. Now, four years later, she just re­leased her sec­ond album, Haul away!, where we again find that mix of jazz, soul, folk and indie that de­fines her. I de­cide to break the ice, ask­ing her about her lat­est record (artists tend to re­ally like pro­mot­ing them­selves) in order to, lit­tle by lit­tle, win her over. Se­ri­ously, from miles away I can tell that she doesn't feel like giv­ing this in­ter­view...

Caféba­bel (CB): What sur­prises, what change, can we find in this new album?

Liz Green (LG): What can we find that's new? Well,  it's ba­si­cally the same as the pre­vi­ous record, but with more piano... That and the flow. That's more or less the only dif­fer­ence. Yeah.

Very well. It's not what I ex­pected, but fine. I keep at her, but there's noth­ing else. No other dif­fer­ences. In fact, the first record worked pretty well, so why wouldn't she make the sec­ond one sim­i­lar? How­ever, Liz's de­meanor isn't en­tirely op­ti­mistic, so I de­cide to leave this topic for later and ask the typ­i­cal ques­tion that no mu­si­cal in­ter­view can be with­out.

LG: I don't know, I re­ally don't know. I just try to lis­ten to a lot of dif­fer­ent peo­ple and read a lot of dif­fer­ent books and then I have the... I don't know. It's like a big ball. And then, I start to write songs and there's al­ways some­one who says: “Oh! This comes from... Or from... “. But I truly don't know, it prob­a­bly comes from one of the books that I've read or from one of the records I've heard. From wher­ever. In ei­ther case, it's the prod­uct of a big cere­bral ball. There's not any spe­cific in­flu­ence, it just so hap­pens that I sound like a lot of things.

CB: But what type of music do you lis­ten to? (I de­cide to in­sist and not give in).

LG: I mostly lis­ten to my friend's music, a band from Man­ches­ter that I used to play with. I like the melodies they make, a mix of dif­fer­ent styles like soul and Irish music, jazz and blues... They re­ally in­flu­ence me a lot. So, it's like a mix of soul, clas­si­cal music, jazz... yeah.

LG: It in­volves a lot of words (she laughs). Ac­tu­ally, I don't choose any­thing, to be hon­est, and maybe this is mak­ing me sound like a jerk, but I only make up sto­ries be­cause peo­ple want to know what the sto­ries be­hind my songs are. I re­ally don't plan any­thing, you could prob­a­bly think up any­thing and that could mean some­thing in some song. The truth is the in­ter­pre­ta­tions that peo­ple make up about my songs don't worry me. Peo­ple who lis­ten to my song and say “oh, yeah, I think that this is talk­ing about Liz and then, oh yeah!”. Well look, I don't know if that's the con­ver­sa­tion... maybe. Why not? But, hon­estly, I don't know what in­ter­pre­ta­tion to make up. How­ever, I'm used to writ­ing de­press­ing sto­ries be­cause I be­lieve that a story isn't good if it has a happy end­ing. It's not a good story; there has to be some­thing un­happy.

CB: And how long can it take you to write about a sub­ject?

LG: Every sub­ject is dif­fer­ent.

CB: Do you have a spe­cial place to write?

LG – I live in a room in a shared house, that's where I write the ma­jor­ity of my songs, in a room, with a bed, a desk and a gui­tar. I also write a lot on trains, they're good places to write.

CB: And do you have an au­thor in par­tic­u­lar that in­ter­ests you?

At this point, I've con­firmed that Liz doesn't feel like being here, an­swer­ing my ques­tions. And the truth is I'm re­ally sorry. I want to tell her that this is dif­fi­cult for me too, es­pe­cially since it's one of my first in­ter­views with a singer and, please, take pity on me. I'm young, I'm try­ing my best and you're not mak­ing this easy for me at all! For a mo­ment, I think about in­ter­rupt­ing the in­ter­view, stand­ing up and giv­ing her a hug. It seems like that's what Liz re­ally needs; she's re­ally tired. How­ever, I de­cide not to throw in the towel. A cou­ple more ques­tions and I'll be able to hug her.

CB: With this ques­tion we're al­most done... How do you feel on stage? What do you try to give and what do you re­ceive from your au­di­ence?

LG: I try to cap­ti­vate, but I'm re­ally tired right now. I hope that peo­ple enjoy it. You know in a small place with this soft music... do you know what I'm talk­ing about? But today the stage was too big, and you know, sometimes these things don't work. Some­times it's hard; I'm talk­ing about con­nect­ing. Maybe if I would have been able to sing in some ­place smaller, I even would have done an acoustic set, but this wasn't the right place. It's not what peo­ple want at a fes­ti­val. Peo­ple want to dance and get drunk, not lis­ten to a gui­tar. My set isn't a mu­si­cal per­for­mance. I just pre­fer more in­ti­mate venues, where peo­ple don't need to dance and where they just have to lis­ten to me. I don't like to feel like I'm in­ter­rupt­ing any­body. My music isn't main­stream, so it's pretty hard to reach peo­ple, es­pe­cially in such a huge place. Yeah, it's been pretty hard to reach peo­ple.

So, that's what it's all about. Yes, I was at the con­cert and no­ticed it too. The pavil­lion, the fes­ti­val's main stage was huge and at seven at night it was half empty. There were even peo­ple talk­ing while she was singing. No, the con­cert definit­ely didn't work, de­spite Liz doing very well.

CB: And what type of fes­ti­val would you feel more com­fort­able at?

CB: But is there some place, in par­tic­u­lar, that you would like to play?

LG: No, not at the mo­ment, no. Well, I would like to act in a mu­si­cal maybe, hehehe. I don't know. I don't want to sing at all right now. Well, I've prob­a­bly al­ready done it. I've sang at a lot of places, this has been one of the biggest places I've ever sang and I re­ally think this isn't the kind of space where my music can work. It's not good for that. My music re­quires a smaller place and, the truth is, I don't know what I want to do at the mo­ment. Right now, I just want to go home. I'm re­ally, re­ally tired. I haven't been home for two months and, for real, I just want to get my nor­mal life back. Mak­ing a nor­mal life like nor­mal peo­ple do, and that's it. We've spent a lot of money on all this and it's not work­ing, so I just want to go home. And I'm sorry if I'm not very in­ter­est­ing right now.

End of the in­ter­view. I won­der if Pulp and their fa­mous song, the one that Manel moved us with, all of us that ex­press our­selves in Catalán (and those who don't) years later, were her source of in­spi­ra­tion. But I don't ask her about that. Our chat has ended and I de­bate be­tween hug­ing her or not. There's no hug, in the end. I can un­der­stand what's hap­pen­ing to her. She's been away from home for too long, trav­el­ing and strug­gling with a tonne of dif­fer­ent au­di­ences, with every­day prob­lems, singing in very dif­fer­ent spaces and try­ing to do it well. Liz just needs a break, like any per­son would. With every­thing, and de­spite her ill-fated pre­dic­tions, I pre­fer to pre­dict (and wish her) much suc­cess. She just re­leased her sec­ond album and those who un­der­stand music guar­an­tee that it's very well done. I don't un­der­stand much about music, but I have en­joyed the record. I'm able to es­cape with Liz's music. So, I wish her this: the best and that, like her au­di­ence, she's able to es­cape soon, very soon, to that room in a shared house that she so yearns for and feels so far away from at the mo­ment.