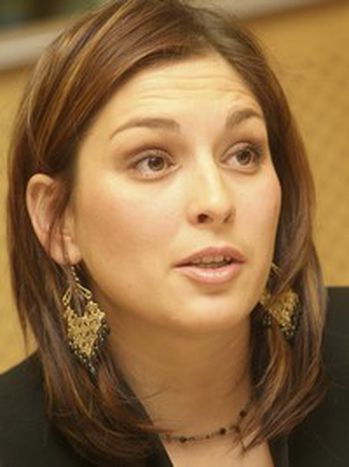 Lívia Járóka: from activism to politics

Lívia Járóka, a Hungarian MEP, is committed to fighting for Roma rights, but this doesn’t mean she has forgotten home

We met the day Vladimir Putin visited Budapest. While all the media attention was directed at the Russian leader, on a quiet backstreet of Budapest equally important talks were going on. Lívia Járóka, a member of the European Parliament (EP), agreed to meet me during a break in these talks. While politicians waited for her in the other room, Járóka talked passionately about her mission: ending the racism against the Roma, and helping them find their place in Europe.

The long history of suffering

The Roma are one of the longest suffering minority groups in Europe. It is believed that they emigrated out of India into Europe a thousand years ago. 1471 saw the first anti-Gypsy laws passed in Switzerland, and the next five hundred years saw an intensification of hostility towards the Roma. During World War II, the Nazis murdered 200,000 to 800,000 Roma in an attempted genocide known as the Porajmos. This shameful European history continued during the 1999 ethnic cleansing of the Roma community of Kosovo. Even today, The European Roma Rights Centre continues to track widespread racism against the Roma across Europe. Roma activists like Lívia Járóka are trying to find a European solution to what is a trans-European problem.

Since the beginning of her career Járóka has been attracting Hungarian and European attention to the situation of the Roma minority. The quiet but firm activist told me about the beginning of her career: “as an anthropologist who had been studying Roma life for years, my name was not unknown to politicians dealing with human rights. They regularly asked for my opinion, and, if needed, I was never afraid to make critical remarks.”

During studies abroad she began to work with Roma civil organisations outside of Hungary. In 2004, she was elected as a member of the EP in the ranks of the largest Hungarian opposition party, Fidesz. Járóka became the first ever Roma member of Parliament. Yet she quickly found her feet, becoming a member of the European People’s Party (EPP) and vice president of the European Anti-racism and Diversity Intergroup.

Járóka did not seem surprised when I asked her that as a young Eastern European woman in a world of middle aged men, if it was hard to not be considered simply exotic. “For them to take me seriously, we had to work double-time,” she replied. “I and my colleagues did a serious and professional job in bringing the situation of the Roma people in Europe to the attention of the politicians,” she continued. “Unlike other minorities, they don’t have a network of civil organisations developed. It is my mission to support the birth of such organisations, as well as to clear up the misconceptions surrounding the Roma in Europe.” “European decision makers need to learn about the situation of these people,” she added.

I wondered whether it was hard to preserve one’s idealism while working in European politics. “After fighting as an activist I had to learn to make compromises,” she answered. “You shouldn’t lose sight of your goals, but even in the complicated network of interests in the EU one can arrive at useful agreements. While at first we hit a brick wall, as our activities hurt others political interests, now the EU is now beginning to recognise that the situation of Roma people is not something that can be swept under the rug.”

Hopes for the future

After years of struggle, in 2005 the EP’s Resolution on Roma Rights was born. Rather than being a substantive resolution however, it was a detailed evaluation of the current situation. It emphasised that the “12-15 million Roma living in Europe, 7-9 million of whom live in the European Union, suffer racial discrimination and in many cases are subject to severe structural discrimination, poverty and social exclusion, as well as multiple discrimination on the basis of gender, age, disability and sexual orientation.” Recent problems with immigration in Europe, such as the riots in France in November 2005, have no doubt made it more difficult to fight for Roma rights, as they are an underprivileged minority also seen as outsiders in European society. Lívia Járóka says that sometimes it seems as if she is alone in her fight against the bureaucracy of the EU. Fortunately, MEP’s of every party are supporting the case. “We can only move forward with a joint effort,” she added.

Járóka is determined to succeed in her struggle, even if it means using unorthodox methods. As part of the EPP’s campaign to modernise its image, “they are about to produce a commercial entitled “Alliance of Values”, and I will be the face of the campaign. I used to keep my distance from political marketing and branding. However, I came to realize that image plays an important role in today’s media-savvy world. As a politician, I had to take this chance as a part of my fight against discrimination.”

Lívia Járóka spends most of her time in Brussels and touring the EU. In such an environment, I ask, how do you keep touch with people back home? “There is no bigger difference in Europe than that between the diplomatic areas of Brussels and the slums of Eastern Europe,” she replies. “We keep in touch daily via phone and the internet, and we travel home almost weekly.”

Despite all the work she does, Járóka is careful not to confuse her priorities. “’Naturally, the most important thing for me is my family. We spend as much time together as possible. This requires them to travel with me everywhere – my family gives me all the support I need for my work. This is my life.” She will not let Europe forget the plight of the Roma easily.