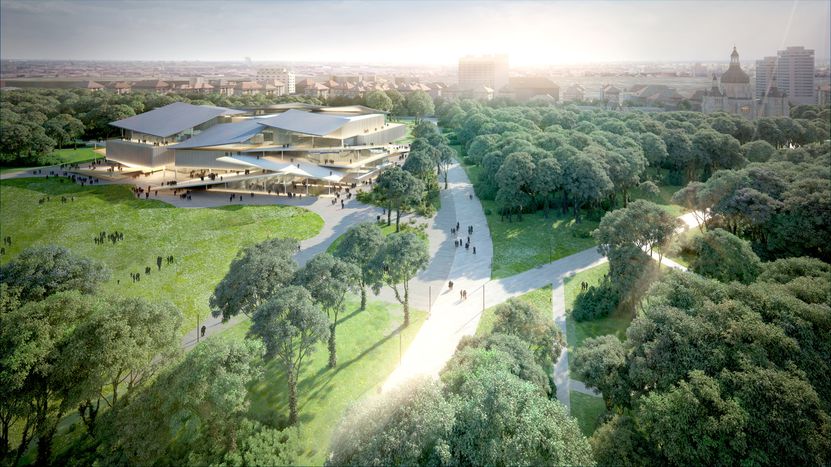 What is a museum quarter and why are there so many of them in Europe? An what is going on in Budapest's oldest public park? The controversial cultural investment, the Liget Budapest project will reshape the face of the city, so it is definately worth some time to compare it with other similar Europen projects.

According to the Swiss-British philosopher, Alain de Botton, “our museums of art have become our new churches”. If we take a quick look at the contemporary European museum scene, we have to admit, that de Botton was right. The best museums, like the Louvre or the Uffizi attract more people than ever. Instead of holy places, these “pilgrims” visit the churches of art. As a cause and a consequence of this phenomenon at the same time, most museums try to host at least one “blockbuster” temporary exhibition per year, where the works of some world-famous artist, like Rembrandt or Picasso are shown. Maybe with lower intensity, but collections of archaeology, history, design, technology or natural sciences also experience a growing public interest towards them.

From this phenomenon evolved the renaissance of the idea of the museum district. Some of them, like the Museuminsel in Berlin are considerably older compared to some brand new projects, like the City of Arts and Sciences in Valencia. Many of them developed over a long period of time, with museums built in different decades or centuries next to each other, but now they all share a common philosophy: the whole is greater than the sum of its parts. This means that museums standing in the same quarter attract more people, especially tourists, as if they could only be found in different parts of the city. Since the same idea lies behind the concept of malls and shopping streets, it is obvious, that the establishment of a museum district is not only a question of culture, but business too.

The Liget Budapest is a governmental project running parallel with the reconstruction of the Buda castle district. It was announced in 2011 and the first construction works have just started. Its aim is - together with the restoration of Budapest’s oldest public park, the Városliget (“City Park”) – to create a museum district for Budapest with three main methods. The first method consists of the reconstruction or expansion of present institutions around the Városliget, like the Museum of Fine Arts, the Hungarian Museum of Science, Technology and Transport, the Hungarian Agricultural Museum and the Zoo. The second is to move museums – like the Hungarian National Gallery and the Museum of Ethnography – out of their original place from the castle or the city centre to a newly built building in the park. The emptied buildings will be utilized for governmental, administrative and representational purposes. The last way is the creation of new institutions, like the House of Hungarian Music – a museum and a concert hall – and the City Park Theatre, a building destroyed in the World War II. Nothing will happen to the Kunsthalle standing next to the Liget, but it can also be considered as the part of the museum quarter. The Liget was planned with the aim of boosting the cultural tourism heading to Budapest, since most of the visitors still travel here to get drunk in the cheap bars and not to enjoy some excellent pieces of art.

The project was criticised by many museum professionals, urbanists, politicians, public intellectuals and civil organizations. It is highly doubtable, whether Hungary, one of the weakest economies in the EU should spend its financial resources on an extremely expensive prestige investment. Some assume that the hidden aim of the project is to make the place of the National Gallery in the castle free for the representational plans of the right-winged Prime Minister, Viktor Orbán. Between the two World Wars the castle was the residence of the autocratic rightist governor Miklós Horthy so using the building for political instead of cultural purposes has a bad connotation. Furthermore, Budapest is quite poor in public parks, which is the reason why so many activists want to protect the green area for the local people, believing that the construction project would irretrievably damage it. The violent actions of the police and security guards against the activists also generated a heated public debate. On the other hand, the plans of the new buildings designed by acknowledged Hungarian and foreigner architects gained outstanding critical success in the media and among professionals.

In my opinion, everything that can be said about the above-mentioned critical aspects of the Liget Budapest has already been said. My aim is to examine the project from a new point view, from the point of museology, and to compare it with other European museum districts. In my opinion, this aspect has great importance if we want to predict the future success of the project. European cities have plenty of museum quarters; most of them consist of museums of art, accompanied by concert halls, theatres and other cultural institutions. The concept of the museum districts is especially popular in Germany. There are two bigger ones only in Berlin: the historical Museuminsel built between 1830 and 1930 with museums of art and archaeology, like the Alte Nationalgalerie and the Pergamonmusem and the more modern Kulturforum with museums of arts, crafts and other institutions like concert halls and a library. And the smaller museum quarters around the Charlottenburg Palace and in Dahlem were not even mentioned! The Kunstareal in Munich is an area with older and newer museums, for instance the three world-famous Pinakotheks, all hosting exhibitions of art and archaeology. Additionally, the Museumsufer along the Main is located in Frankfurt with a wide variety of museums ranging from art to architecture and ethnology. Aside from Germany, the Museumplein in Amsterdam is a significant place for art-lovers, even though only three art museums and a concert hall are found there. Another place of particular interest is the City of Arts and Sciences in Valencia, which is an odd one out, since it does not contain any museum of art or archaeology, only more interactive and entertaining unconventional scientific museums and an opera house and concert halls. The last of these cultural projects is the Museumsquartier in Vienna, completed in 2001. Spaces for performance arts, music, art museums, shops and cafés are located in the building of the formal court stables, next to the world-famous Kunsthistorisches and Naturhistorisches Museum. I think that this is the project, which the Liget Budapest resembles the most, apart from the very different locations.

To understand the main concept of the Liget, it is worth mentioning the institutions, which were originally intended to be in the project, but were left out of the final plans. These three were the Ludwig Museum of Contemporary Art, presently located in the building of the Palace of Arts, the yet non-existing Hungarian Museum of Architecture and the Hungarian Museum of Photography, currently located in the provincial town of Kecskemét.  The last one could have been one of the most important attractions in the Liget, since a great percent of the best 20th century photographers from André Kertész and Martin Munkácsi to Robert Capa and Lucien Hervé were born in Hungary. The buildings for the two latter museums - a black and a white cube - were very similar to the bulidings of the Leopold Museum and the Mumok in Vienna. They also confirm the assumption, that the original inspiration for the Liget was the Museumsquartier. With these museums, the concept of the Liget would resemble more the other above-mentioned museum districts with a main focus on art. But since – mostly for financial reasons – these plans were withdrawn, the Liget has become a very unique project, which contains art, science and technology in the same proportions, while music and performance arts are also a part of it. This is not a straight way to success, since mostly the art museums are those, who attract the most people.

From my point of view, the key to the success of the Liget Budapest is the Museum of Fine Arts, standing on the Heroes’ Square next to the park. Why? As I have already mentioned, the most popular museums are art museums: the Museum of Fine Arts host collections of Egyptian and Greek-Roman art, furthermore European painting and sculpture from the Middle Ages to Modernism. The collection might not be as rich in world-famous works of art as the most famous European museums, but it is still definitely the most popular Hungarian museum, attracting many tourists and organizing successful temporary exhibitions every year. Unlike most other Hungarian museums, it is an acknowledged member of the European museum scene.  So no matter how high quality exhibitions will be hosted by the Hungarian House of Music or in the Museum of Ethnography, the Museum of Fine Arts will always be more popular. I have never heard of any museum-lover, who, when visiting a foreign city for a short time, would first go to the local museum of agriculture instead of an art gallery. The new National Gallery, which currently contains pieces of art from Hungary, will get the modern collections of the Museum of Fine Arts, which contains works by Monet, Gauguin or Rodin. The motivation of this act is definitely the fundamental need to create another tourist-magnet in the Liget.

The most effective argument against the project was its location. Most citizens of Budapest do not want a museum district in the Városliget. Alternative locations, like rust belts, empty buildings in the centre or the vacant lots of the city and the castle came to mind, but László Baán, the director of the Museum of Fine Arts and the National Gallery and the commissioner of the Liget Budapest still argued, that the museum quarter of Budapest with the new museums can only be built there. Baán is rather a businessman with good political connections, than a professional of art history, but since a museum district is also a business project, this time he was right. All the new museums can be built in another part of Budapest, but then they would not attract many more tourists, because they would still visit the well-known art museums of Budapest. On the other hand, the tourists visiting the Museum of Fine Arts or the National Gallery might also be willing to visit other smaller museums near them.  If Budapest wants a museum quarter equal to the greatest European ones, then it has to be built in the Városliget. Otherwise we cannot have one: it is the museums or the park. And with the backup of Orbán's ruling party, the Fidesz, the museums seem to win.