Life on the road with Anita and Knudsen

Anita has lived in a caravan for four months. With no running water or electricity, it's not a life for the faint of heart, the disorganised or the vain. So how does she manage - and what does she do to stay happy?

Anita's lifestyle is not suitable for people who can’t stand the cold or those who prefer to take lengthy showers in the luxury of their own home. Anyone who decided to spend their whole life in a camper van must be prepared to downsize, forego luxuries and suffer during the cold winter months. Anita, however, is happy with her living arrangement.

Before she moved into a caravan, she lived in a regular flat. Then she started an internship at German broadcaster Südwestrundfunk (SWR), for which she was required to move every couple of months - and look for a new flat every time. A caravan seemed more suitable and, in the long-term, better value for money.  However, she has another reason for choosing to live on the road: "My flat was so claustrophobic, I felt as though I couldn't breathe in it. I hated living under a concrete ceiling. I wanted there to be nothing separating me from the night sky but a thin bit of plastic. And so began her search for a set of wheels. 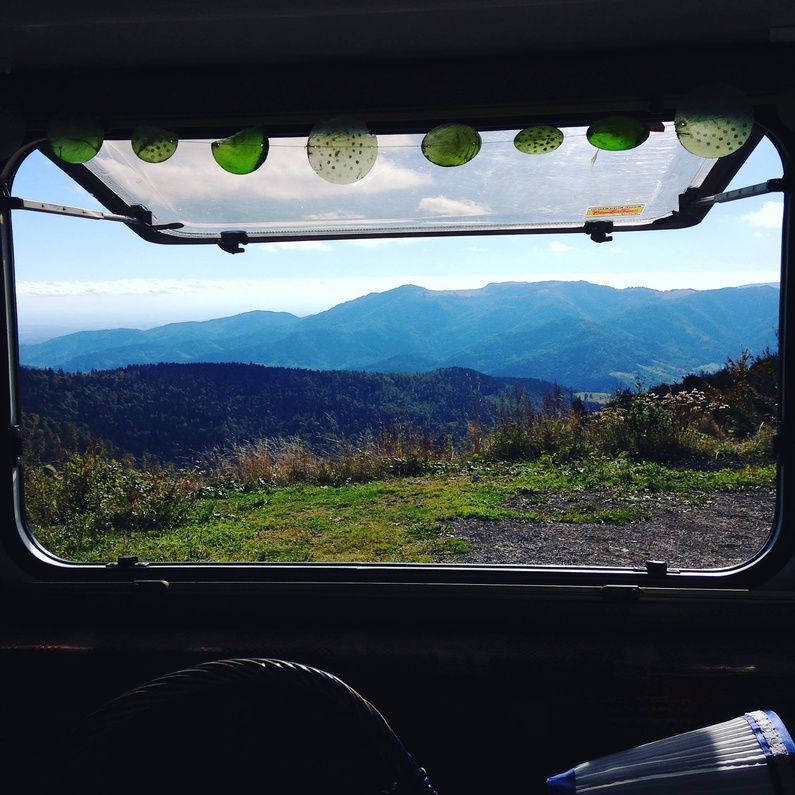 The search lasted four months, with a friend pointing her in the right direction. When she saw a photograph of the van on the website, she felt rather positive about it. She went to Baden and the moment she saw the van, it was love at first sight. The intended short test drive turned into a two-hour joyride. "I was almost thrown out of it," she recalls, with a hint of enthusiasm in her voice. It’s almost like she’s talking about a partner rather than a vehicle. She spent a long time searching for an appropriate name for her new companion. She thought the van was a ‘she’ at first, and looked for names that were "popular in the sixties and seventies." In the end, however, she christened him "Knudsen."

For 4,000 euros the van was hers, with a free emissions test and a spare cam belt into the bargain. It wasn’t exactly state-of-the-art as she had imagined, but so far everything had gone smoothly. Now, the old-fashioned interior has been revamped and converted. With the help of her sister-in-law, Anita painted the walls of the van, installed loudspeakers "for a good sound," a table, new lounge upholstery and a composting toilet. The toilet has been constructed using sheets of chipboard with a round hole in the middle, to which she has attached a colourful toilet seat. The waste falls into wood chips in a bucket underneath, which she empties every ten days. "It's not quite as disgusting as you would think," she says reassuringly. 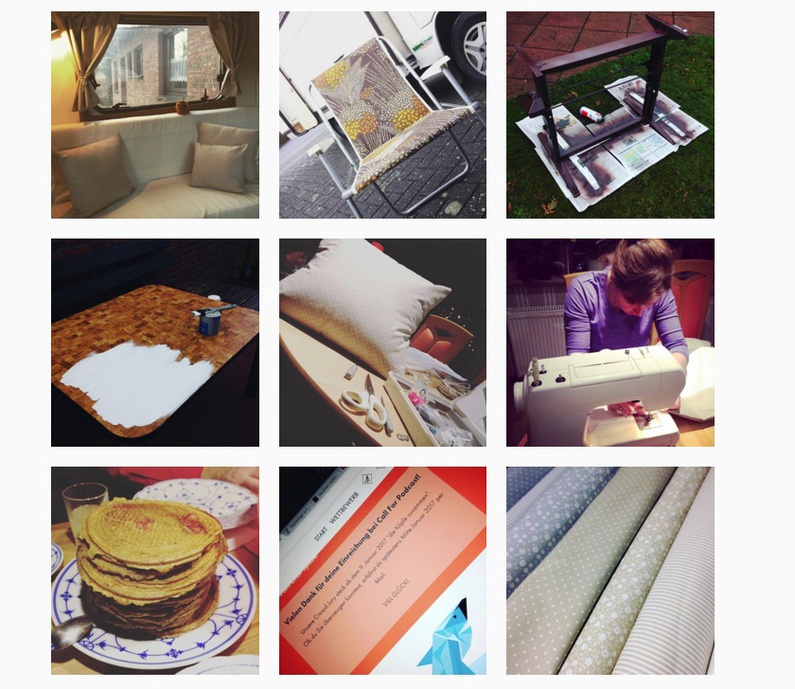 Her living space is confined to a mere six square metres, comprised of a small kitchenette; a tiny bathroom; two sofa cushions and a sleeping bunk.  It’s rather cramped, but it’s comfortable and it suits her lifestyle: "I can get a little restless, both in my private life and in my professional life - I'm always looking for new experiences." In the midst of chaos and change, the van is a constant. As Anita says: "For every relocation and change of scenery, Knudsen is the haven that I can always return to. I guess I decided to buy it because I wanted some stability in my life. 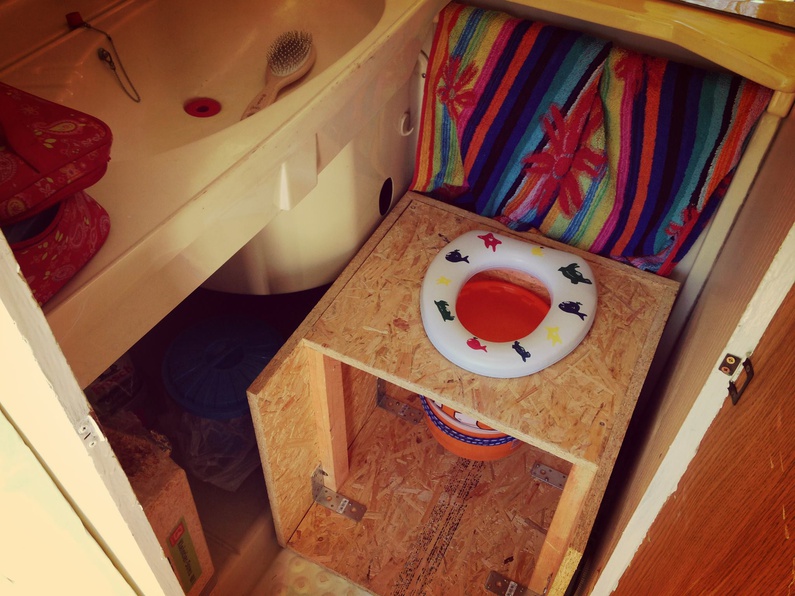 Life on the road can be hard and uncomfortable: often you can see your own breath, even when the heating is on. The temperature in the van is only about 17 degrees warmer than it is outside. That sounds like a lot but often the temperature outside is only five below zero. But Anita has strategies to help her to keep warm: at night she wears a hat, and sleeps under a thick duvet that cost "more than 200 euros." It's only the tip of her nose that feels the cold.

She also cooks a lot (making the most of the heat from the oven) and keeps herself warm with a Thermos of tea. But she sees the funny side of it: "People say there is no such thing as cold weather, there’s only bad clothing.” She dresses for the cold and wears plenty of layers: thermal underwear under a tracksuit, and two pairs of thick socks on her feet - "You could compare me to an onion, I have so many layers!" She also eats a lot: "When I am cold, my body produces more heat. Then I eat a lot of pasta and carbohydrates so that my body has plenty of fuel. Then I can say to myself: ‘Yes body, I can do some work now!’”

When guests come to visit for the first time, Anita is "always very proud.” She always looks forward to visitors "because they bring up the temperature in the room by about five degrees. I’d also like to have people stay overnight," she adds with a smile, "because they emit heat  - I wouldn’t need to wear as many layers!" Even so, there are inevitably nights where she doesn't feel like going straight home: "When that happens, I just stay longer at work and watch videos on YouTube, or I go into town to avoid the cold. Your home should be comfortable and inviting, somewhere you want to return to after a day's work. But when it’s freezing outside, even the bed sheets are cold in my van.” 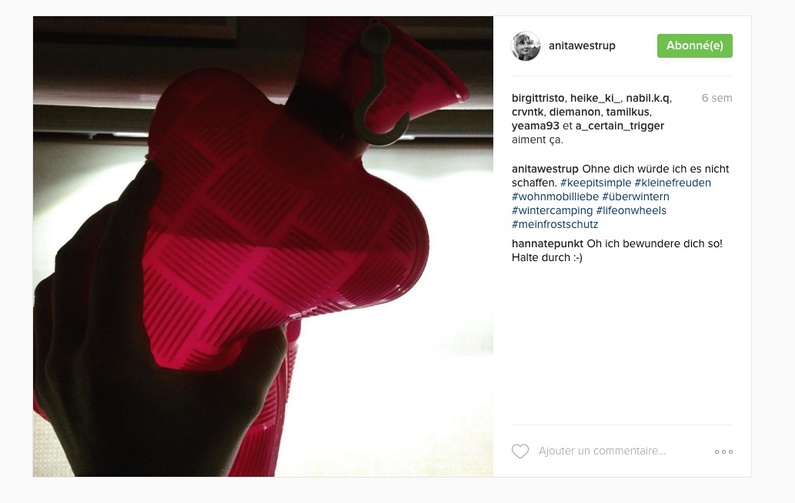 Before she met Knudsen, Anita envisioned "wild road trips into the sunset, with karaoke sessions and rest-stops somewhere random every night.” But right now, Knudsen is mostly rooted to the spot. Anita has parked it in one of the rare free parking sports in Stuttgart, and she won’t give it up easily. Knudsen has only covered 4,447km so far; a couple of trips to see Anita’s parents in the north, and some small sorties here and there.

But there’s another reason for staying put in the wintertime: Anita needs electricity for heat and light. Installing a solar panel on the roof is on her to-do list, somewhere between renovating her bed and making some decorations out of dried flowers. For the moment, Anita gets electricity from the neighbours - a married couple who live opposite, and who she likes to call her "power parents." She's parked directly opposite their house and runs a power cable across the pavement between the house and her van. She knows that the couple enjoy having "someone to talk to", and often gets invited over for coffee.

Anita finds great joy in making connections with others like this: "I've met wonderful people who I will never forget. I could write stories about them!" They include not only her quirky power parents but also the men in the lobby at SWR, who she often shares a joke with after hours.

"Why do things have to be so complicated?" 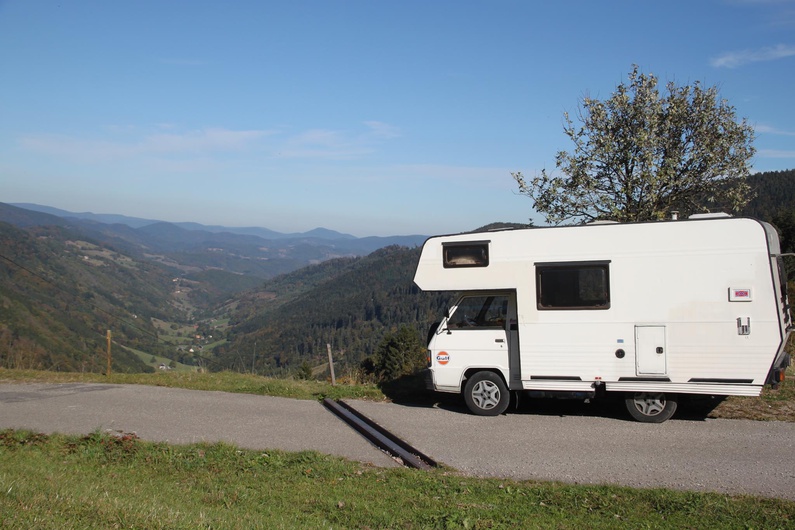 Anita does her washing at the launderette, charges her phone and her laptop at work, and takes showers and does the washing up at the office. The van has a water tank, but with the freezing temperatures in winter, Anita is unable to use it. Instead, she uses a five-litre water container, which she fills at work from public taps. "I use water for a lot of things: cooking pasta, making tea, washing my teeth..." One container lasts three days. In any case, you can't afford to be too vain when you live in a caravan. "In the mornings, I must sometimes look like a zombie racing through the office block on the way to the showers. A couple of my colleagues have definitely seen me in a disheveled state - sporting the 'just-out-of-bed' look!"

Four months on, Anita has no regrets about living in the van. On the contrary: it was a very profitable move. If she lives in it until the summer, she will have spent the same amount that she would have paid in rent over the same period. "You can feel a bit vulnerable,” she admits. “The sound of rain on the roof is extremely loud. I can't use the phone when it rains because of the noise." In spite of this, she doesn’t feel anxious.

"I sleep well," she says, “And besides, what would anyone try and steal from me? All I have in here is a computer and a camera, which I keep well-hidden.” Still, she keeps a can of pepper spray by her bedside, to make her mother feel better. But the best preventative measure against burglaries is quite simple: make the place into a mess. "Fill the caravan with garbage and it will look disgusting. Then no one will want to break in!” A friendly caravan owner gave her that tip.

On the road again... 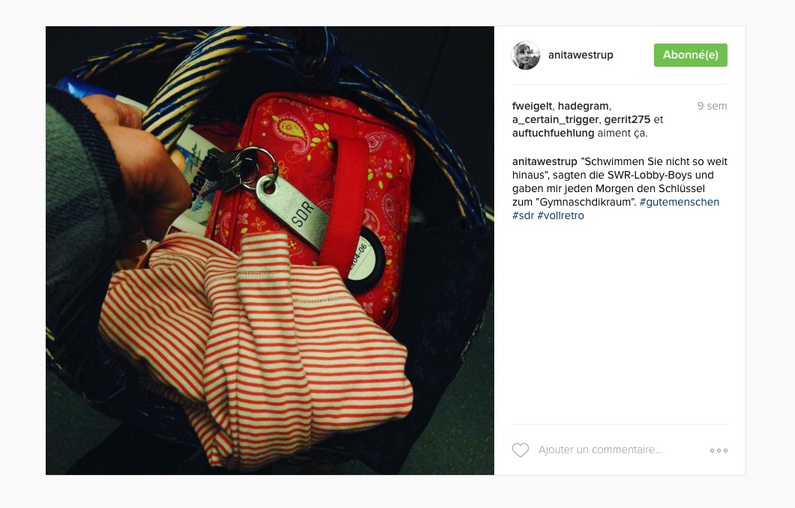 When winter gives way to spring, Anita will finally be able to travel again. She wants to explore southern Germany, and imagines herself "sitting by the sea and being woken by the sun in the morning, opening the window and looking out on to the ocean." She wants to travel to the coast of the North Sea with her family in tow, even though such excursions take longer traveling on the road; she can only travel at 80 km per hour.

First, though, she has another destination in mind: a trip with Knudsen to the City of Lights. "I promised him we'd go to Paris. We will see the Eiffel Tower, for certain. We'll hit the road as soon as spring is here."