Let’s Change the Debate on Europe!

This morning, the Dahrendorf Symposium 2011 opened, aiming at „Changing the Debate on Europe“. Today and tomorrow, participants will discuss at the Berlin-Brandenburgische Akademie der Wissenschaften in Berlin issues like “Europe as an ideological space and as a vision”, “The financial and Euro crisis” or “Europe as a social space”. Why could this possibly be relevant?

Quite obviously, the European project is in crisis. The common currency is under pressure, as some countries were unable to finance themselves on the markets and had to rely on bail-outs by European partner countries. In exchange, harsh austerity-measures were to be imposed in, inter alia, Greece, Portugal and Ireland. Many taxpayers and citizens in most countries feel as victims of the respective other. Stereotypes are invoked. German chancellor Merkel talked about “lazy” Southerners, while some protesters in the South depicted her and Europe in general as Nazi-like imperialists. 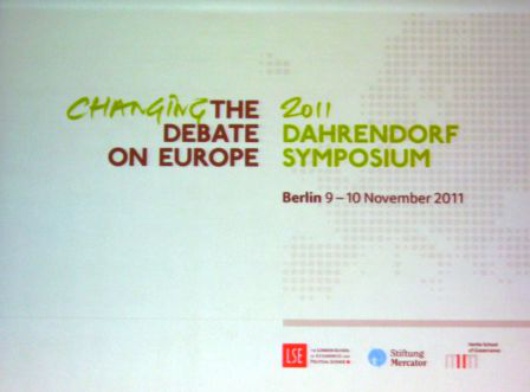 Unfortunately, the Euro-crisis isn’t the only challenge Europe is facing. Other problems include dynamics in the Schengen-area, in which border controls are abolished, and which was put into question this spring by several European countries out of fears of transnational crime and migration. France and Italy rowed over migrants travelling from Lampedusa to France. Denmark threatened to re-impose border-conflicts (and stepped back recently after a change of government).

Behind all this political topics, we find individual fates. People affected by the Euro-crisis might lose their jobs or have their wages cut. Migrants sometimes face horrible treatments, when they finally reach Europe. Romanians and Bulgarians still can’t travel freely in Europe, as their countries still didn’t join the Schengen-area.

Of course, problems are complex and no easy answers will be found. But thinking about the pressing challenges, approaching them differently and challenging the common knowledge might make a difference. This might already start by leaving behind the crisis rhetoric so often found in political speeches and media analysis and by concentrating instead on solutions rather than problems. “Changing the Debate on Europe” might therefore be already a good start. Conferences like the Dahrendorf Symposium bring together academics, politicians and activists from civil society. They might indicate where the road is leading to. But citizens should have a say as well. To avoid closed doors, let’s have a look at the Dahrendorf Symposium.