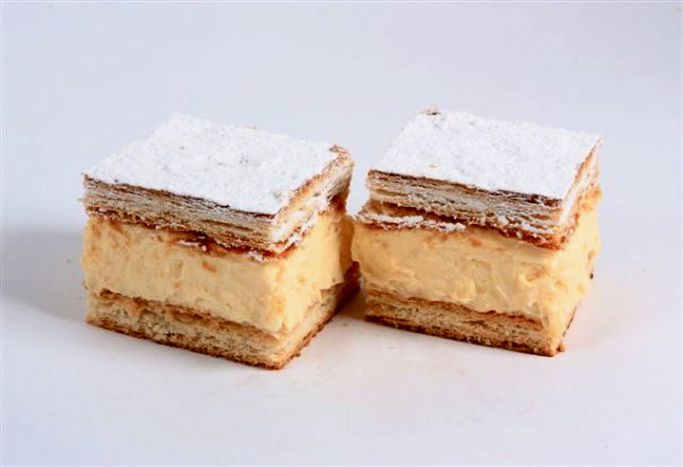 Before spring even broke in 2013, Benedict XVI of Germany had resigned the papacy over to our era’s new pope, Francis I, an Argentinian and jesuit to boot. We return to Wadowice, hometown of their predecessor John-Paul II, who so loved the world-famous kremówka

Some sources would have it that the kremowka (pronounced 'krem-ohv-kah') is derived from the French mille-feuille, created in the seventeenth century by the chef François Pierre de la Varenne. The emergence of a similar type of cake on Polish territory coincided with various regional, diverse versions of the delicacy. For example the napoleonka in Warsaw is the same dessert as the kremowka is in Krakow and the rest of Poland.

In the south in particular, a certain Karol Wojtyla would visit his local bakery for a taste of its cream puff pastry. In his own Marcel Proust-like moment, it was on a 1999 visit to his home town that the boy who became pope John Paul II remembered with nostalgia his schoolboy days in the market square. In a similar fashion to what Proust’s fond memories did for the madeleine, Wadowice’s bakeries remain popular for the pope’s favour. It is said that the recipe for the kremovkas that Karol Wojtyla so enjoyed has since been lost, since the bakery had kept it a secret. Since there are many ways to prepare the cake today, here’s one from my auntie, a native of Krakow.

Small glass of whatever liquor you prefer

Once removed from the over, cut across the pastry into two parts

Use a mixer, and slowly add the hot milk, until the cream thickens

Pour the cream over one part of the cake; use the other part to cover, and allow to cool in the refrigerator for an hour

Your papal delight is ready to be blessed with a bite!