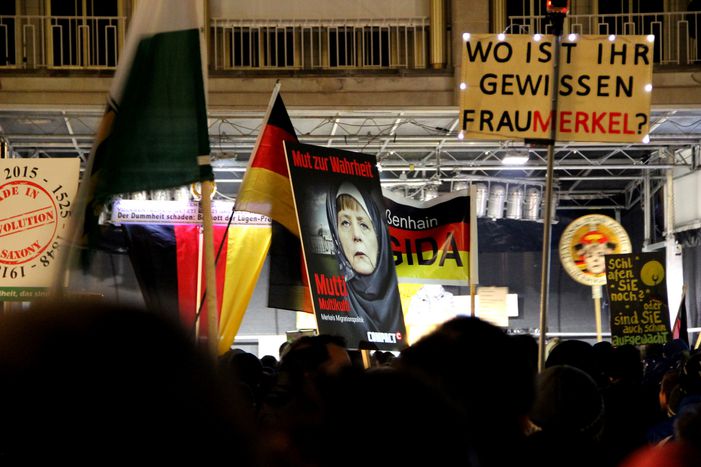 LEGIDA in Leipzig: The Running Joke of the Lügenpresse

The anti-Islam LEGIDA Alliance, Leipzig’s own PEGIDA offshoot, held their second demonstration on Wednesday 21st January. But who are the demonstrators chanting “Wir sind das Volk” ("We are the people") and “Lügenpresse” ("lying press")? We try to get up close and personal with the people behind the group's "evening stroll".

Journalists are warming themselves up in a café right next to the Augustusplatz. Just last week, a tailwind swept through Leipzig, in eastern Germany.  Two topics have dominated conversation all day in the city: the attacks on the French satirical magazine, Charlie Hebdo, and the first LEGIDA demonstration.

Now it’s just very cold. Two hours to go until LEGIDA’s second gathering. People are sitting under the glass roof of the courtyard at the back of the café, where there are tables set out; pensioners are eating raspberry pie, families are with prams and people are speaking Arabic on the two tables next to me. A nice togetherness, you might say.

People don’t quite know what awaits them on this Wednesday evening, after Monday’s demo in Dresden on 19th January was called off amidst terror warnings, and secondly, PEGIDA founders, Lutz Bachmann and Kathrin Oertel, spoke to the “Lügenpresse” (“lying press”) for the first time on Monday. Bachmann had stepped down as the leader of the movement on Wednesday morning (his Facebook account was found to contain earlier posts in which he’d stirred up hatred and a picture of him with a Hitler moustache). The uncertainty of the evening was perpetuated by a hoax that had been going round for a short while suggesting that the route of the “evening stroll” around Leipzig had been changed.

The first police cars had already arrived on the scene this morning – part of an apparent 4000-strong patrol this evening. Their vehicles are now positioned closely together all around the Augustusplatz. The square itself is still fairly empty at 5 p.m. The counter-demonstrators arrived a while ago, though. If you don't have a press pass, you can’t get past the blockade of counter-demonstrators and police to get to LEGIDA, unless you state emphatically that you want to join the demonstration. “But we obviously look whether they match the profile”, says a female police officer. She doesn’t say what the selection criteria are.

"Asylum seekers, nicking clothes off washing lines and, and, and..."

Of course, many people match the profile of those who could be seen last week from the #NoLEGIDA side of the blockade. On the opposing side, there’s one man in a beige fishing jacket, for example, who’s been standing in the square an hour and a half before the march even gets going; he’s hopping from foot to foot on the spot. When I ask him for an interview, he demands to see my journalist’s accreditation first, because: “We have to deal with a hell of a lot of lying journalists round here”. It’s tough to work out how he can assume that I’m not one of them after only taking a quick look at my sheet of paper. Anyway, he looks rather happy to be able to finally have his say. 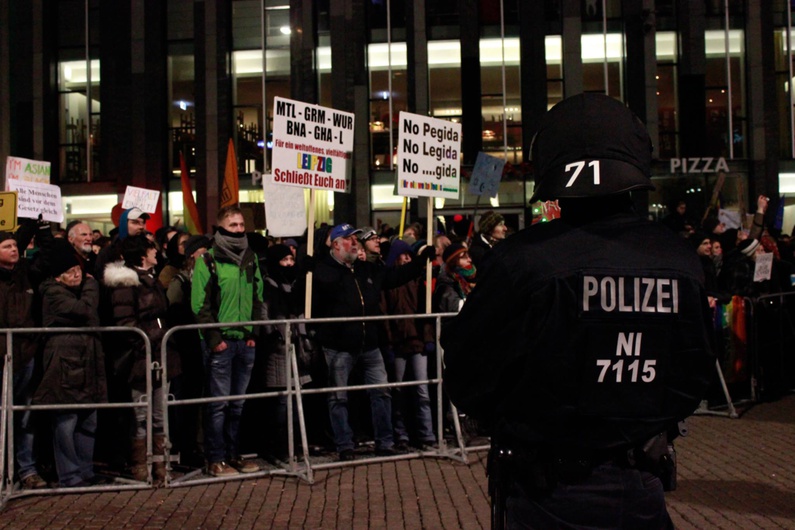 He talks quickly, you’d almost think he’d been preparing: “O.K., here’s where I stand: I was born in 1948 in the GDR. I took to the streets against Honecker and Co. in 1989. I’m here today for many reasons: Where we live, on the outskirts of Leipzig, in Paunsdorf – we’re already being labelled a ghetto – one asylum seekers’ hostel is being built after another. The crime rate is quite high: nicking clothes off washing lines and, and, and… Romanians, Bulgarians, Russians, there’s loads of them where we live”. Islamisation? “Whether that’s the case or not, there’s more and more of them, full stop”. He follows that up with a confused attempt at enlightening me on the issue of Turkish Gastarbeiter (temporary migrant workers).

Germany is shit, you prove it!

One man with an indie dress sense does not match this profile; you could actually imagine him in one of the many autonomous housing projects in Leipzig. He’s a 31 year-old musician and artist. What brings him here? He says that he can see his country getting lost in parallel societies. He speaks carefully: “Birds of a feather do always flock together. The Asians are here for themselves, the Turks have got their shisha bars and are here for themselves, everyone has their own little group. And that’s all well and good, but it just creates parallel societies. I don’t know whether people are mature enough to come together, but I’m afraid they’re not. You can definitely notice that: It leads to civil war; we have to control this excessive immigration, or it’ll create havoc”.

He interrupts himself when the counter-demonstrators all shout “Get lost!” together and boo. He says that he’s scared of “this openness, this tolerance”, which he thinks are feigned. Perhaps that’s the one point that is perhaps understandable. On the one side, you’ve got a crowd of people shouting “Germany’s shit, you prove it!”, on the other, you’ve got a crowd of people using violence to try and break the blockade. It's adichotomy that’s bound to instil real fear into many people. It's too simplistic to paint everything black and white, because the dichotomy of a demonstration and its counter-movement is in effect.

The togetherness that could be experienced on the other side last week can also be seen here, with people quickly exchanging pleasantries and gloves with their neighbours. People are laughing together in the queue for the potato soup stand – a sort of ancient-looking, cauldron-like machine – others are cracking crude jokes in the queue for the three hired portable toilets: “Why do women always take so long on the toilet?” More sarcastic comments come from a fat guy with a beer bottle in his hand: “What a shame, they’ve turned the lights off in the opera house and the Gewandhaus. Look how far we’ve gone with energy saving”. And, of course, the running joke about the Lügenpresse continues to make the rounds.

Click here to read part two of our coverage of LEGIDA in Leipzig.