Robert Bosch Foundation, first floor, plenum. 35 young journalists from eleven countries gathered here. From January 17 to January 20 they were set in motion during the 2nd Babel Academy in Berlin. Reportage workshop on the third floor, writing lab in the fourth, events everywhere in Berlin. Nobody got lost on the way, though.

On the contrary, their way into professional journalism was supposed to be paved.

„After all, Journalism is also a handcraft“, said Georg Baltissen of the Berlin-based indepented newspaper taz. And handcrafts can be learned. Other than Baltissen, who spoke about writing a reportage and commentaries in his workshop, many other speakers shared their experience and knowledge: Meike Dülffer of “eurotopics“, a European Press review website, Andreas Metz from N-Ost, a network of correspondents in Eastern Europe as well as Inga Majer of the television production company „United Visions“ and „tageszeitung“ editors Barbara Oertel, Thomas Eyerich and William Totok.

35 young journalists from all over Europe improved their skills during a busy weekend in January. 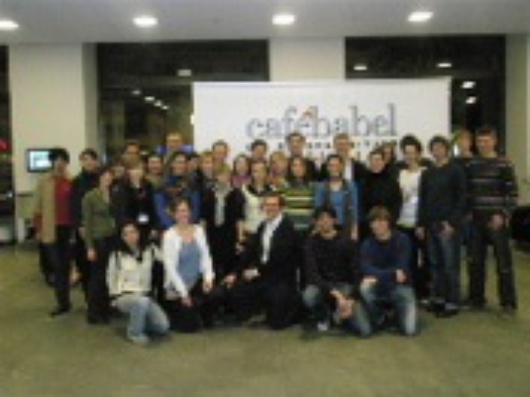 For some insights however, participants had to cover a longer distance than just a few floors in the same building. The Polish ambassador to Berlin, Marek Prawda, welcomed them in the far West of Berlin, in Grunewald. His openness rewarded the young journalists for the long travel. During the rule of the Kaczynski brothers, he recalled, doors of almost all German politicians were open to him because Poland was always at the center of public attention. However, as he said, his work consisted mainly of damage limitation during that time.

Not only did the Polish ambassador make participants familiar with his country. They also got to know each other and their respective countries. „The academy really widened my international circle of friends“, Stephanie Lehner from Austria summed up her experience. She will visit another participant from Brno soon. International contact was easy during evening events – like joint dinner at the „Hell oder Dunkel“ restaurant or dancing at „Roter Salon“. Consequently, one of the goals of „Jugend für Europa“ was accomplished: Bringing together young Europeans. The German agency of the EU programme „Youth in action“ had financed the academy.

Even after the academy has ended, two participants will set off on their way: Christiane Lötsch from Berlin and Pim de Kuijer from Brussels won the journalism competition, into which 27 articles had been entered. As a price they will get their travel expenses for a research trip reimbursed. Christiane will portray the film academy in Lodz, where people like Roman Polanski studied in the past. Pim reported from the independence referendum in Kosovo. Both articles are being published at cafebabel.com. It’s not sure whether Pim will include Oranges in his report. „I didn’t know that Oranges can be so inspiring“, he said after the writing lab with Andreas Metz. Metz placed several Oranges on the table. And then, it was up to the creativity of the young talents. That is what makes a good writer in the end – even though oranges might play a minor role during a journalist’s everyday work.