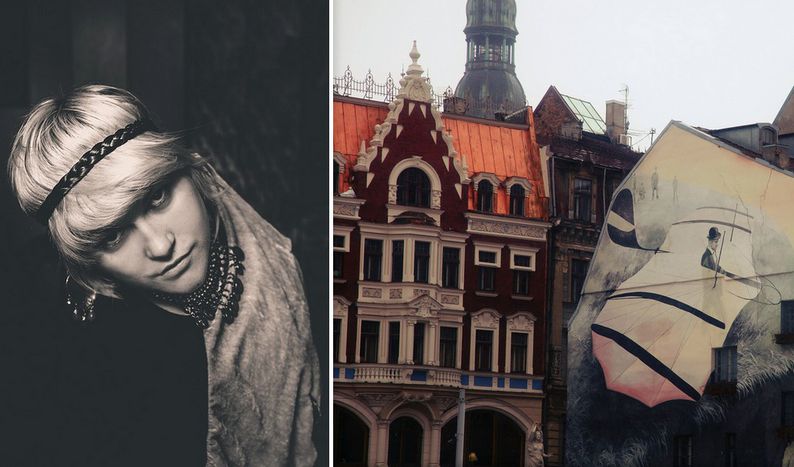 As of January, Riga is the european capital of culture. Everyday culture is supposed to dominate in the Latvian captial during 2014. Culture and life are still dominated by the financial crisis, but even these have grown.

Miera iela is a nar­row street that leads to the sub­urbs from the city cen­ter of the Lat­vian cap­tial Riga. Small, brightly lit shop­win­dows flare up here and there among the dark fa­cades. Friendly cafes and bars, a glass work­shop and an or­ganic gro­cery store, sharply de­signed chil­dren's fash­ion and an al­ter­na­tive hair­styl­ist.

In build­ing num­ber 50, Elina Berklava wants to set new trends with mod­ern artis­tic crafts. She prints sym­bols of Lat­vian folk­lore on leg­gings or wooden coast­ers. Within less than a few years, the once gloomy alley has trans­formed it­self into a cre­ative neigh­bor­hood -- thanks to the heavy fi­nan­cial cri­sis that pulled Latvia along with it in 2009: as many shops began to close, young artists were able to rent the va­cant build­ings for cheap prices. That's what mo­tived Berklava to open her own bou­tique.

With the label European Cultural Capital 2014, artisans like Berklava would like to open their doors to to public. Miera iela is meant to serve as an example of a lively residential district. The artists have already gathered experience through the yearly Street Festival in May: "Everyone can take part in workshops, sculpting, crafting ceramics or blowing glass," says Berklava.

Lack of Room or Art in an Emergency room

Some artists would also like to use the cultural capital year as a way to raise awarness about abuses: for the director of the Center for Contemporary Art, Solvita Krese, the countless vacant buildings in Riga stick out like a sore thumb. Although every fourth building in the city center is uninhabited, there are a lack of venues for exhibitions. The city would rather sell its real estate than make it available to artists. That's how Krese addressed the owners of vacant buildings at the beginning of the financial crisis; provisional exhibitions and spontaneous readings followed suit. For 2014 Krese is holding an art exhibition in a former emergency room. "We want to make the lack of space apparent during the cultural capital year. We have so many great artists who aren't able to display their work."

Program director Aiva Rozenberga says that as a cultural captial Riga would like, above all, to reach the everyday citizen. "Every resident is a VIP for us in 2014." On the opening day, January 18th, a human chain of booklovers the length of a kilometer will connect the Latvian National Library with the spectacular the developments on the bank of the Daugava. Through this, Latvia honors the tradition of the human chain, with which Latvia, Lithuania and Estonia won their independence in the 90s.

Pan­tomime at the sausage counter

On the opening day, passersby are to get a taste--through multimedia shows in the many pavilions of Riga's central market--of what "cultural capital" can mean for Riga. While customers and butchers are incorporated  a pantomime group's performance in the meat hall, others will be playing music amongst cucumbers and tomatoes in the vegetable hall. "We want to enter into a conversation with people. It's when residents have an emotional experience that they're able to change, and then they can also go on to change the city," says Rozenberga.

With 24 million euros the cultural captial Riga has a relatively small budget at its disposal, says marketing director Anna Muhka "We found out that we were going to be a cultural capital when we were stuck right in the middle of the crisis. But the crisis also taught us how to be resourceful. We didn't need money for creativity."

Nevertheless, nothing's being saved on elaborate presentations. Included will be "Born in Riga"--a classical gala with stars, such as the singer Elina Garanca und soprano Kristine Opolais or violinist Gidon Kremer, all of whom come from Latvia-- as well as an international jazz festival. Another point of interest will be an international choir olympiad, which will be carried out for the first time in Latvia. More than 20,000 singers from 50 countries will compete with each other through the country in July. This will especially be a treat for Latvians, says conductor Ints Teterovski. They admittedly celebrate the biggest singing festival in the world every five years, but rarely hear choirs from different countries, such as, for example, traditional music from Africa.

For the afterparty following the opening day, the organisers chose the private cultural center Kanepe, which has existed for the past year in the rooms of a vacant music school. Naturally following the example of the creative district Miera iela. Investor Edgars Kanepe hopes the tourists enjoy themselves in Riga in 2014 so much that they decide to come back: "We want to be a cultural metropolis of Europe."

The author of this article, Birgit Johannsmeier, is a n-ost-correspondent for the Eastern European magazine ostpol.