This is the last part of Babel Berlin's feature series, in which three Babel reporters covered a not so well-known aspect of the Berlinale, Berlin's famous film festival. It's called "Berlinale Talent Campus", a forum for 350 young filmmakers from all over the world to present their works, meet each other and improve their skills during various workshops.

Lena Meier attended "The Indie Filmmaker's Guide to the Internet" for Babel Berlin.

It was about me! Today they were actually talking about me. Me – the audience. It’s 11a.m. at HAU2. Liz Rosenthal hosts the last session of „The Indie Filmmaker’s Guide to the Internet“. She and the experts on the panel explain the talents of the Campus how to dispose a film and the experience that’s related to it. But of course the way they propose is not to go through a sales agent who would have to find a distributor who in turn would try to attract an exhibitor. No, the best way to find the audience is through the internet. At least that is what M Dot Strange and Arin Crumley – to name just two of the four guest experts – argue for. M Dot Strange for instance has a huge fan community on YouTube where he presents all of his work free for everybody to watch it. In return the casual guy in the hoody plus cap can ask his audience for favours: „Please send me scary music.“ or „Please feel free to translate my movie into your language.“ „You can do crazy stuff, just what you want“, M Dot tells us.

The HAU: For one week, the future of indie filmmaking was discussed here. 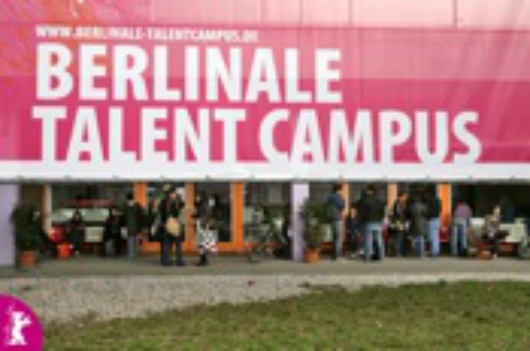 Arin Crumley, the internet optimist from New York, relies on his audience in a different way. His movie „Four Eyed Monster“ about his relationship to his girlfriend Susan Buice is a feature film and has a website where you can – at times – see the movie in full length. There’s also a podcast with additional episodes about the two protagonists. What Arin and Susan ask the audience to do is watch the movie, like it, recommend it to other viewers and maybe support it by giving some money. Also they encourage their fans to leave the code of the place they come from thus collecting people who want to see the film in a theatre. „Online,“ Arin says and the thrill this gives him is obvious „you get directly commented. You give the audience a voice.“

In the afternoon, during the premiere of the the four short internet films that have each been shot and edited in one day during the Campus two things become clear: The directors, actors, editors, sound designers, etc. of these four productions did a great job. Their films tell interesting stories in perfect images. The video below is „The String Puppet“, an impressive short tale which is less than 36 hours old, and a perfect example for the dazzling creativity of the participants. But what is really striking is that the young filmmakers didn’t have the audience on their mind when they did the films. Very slowly they seem to grasp that their films are now „out there“. „The idea of one million people to see my film ... wow ...“ Victoria, one of the directors, remarks. And M Dot recommends to pay attention to how the audience reacts. So the future is really us – the filmloving consumers.

The other garage flicks that have been produced during the last week can be watched at the Campus' Youtube Channel or at Dailymotion.