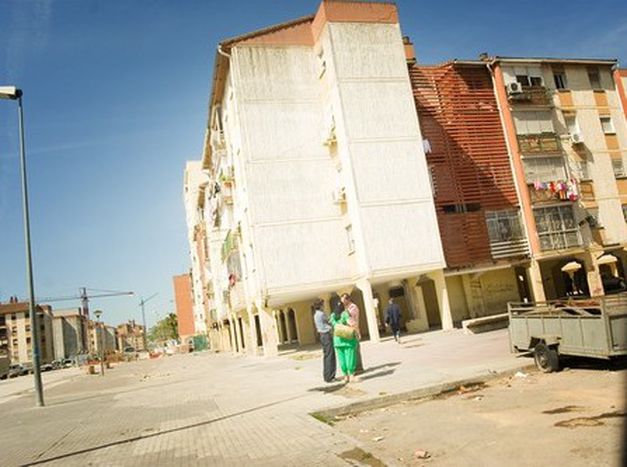 Drugs, illiteracy and snotty-nosed children. A jungle into which buses and taxis fear to venture. This remains the enduring image of Polígono Sur, a suburb on the southern edge of the Andalusian capital. But is the reputation of the ‘3000th district’ justified? 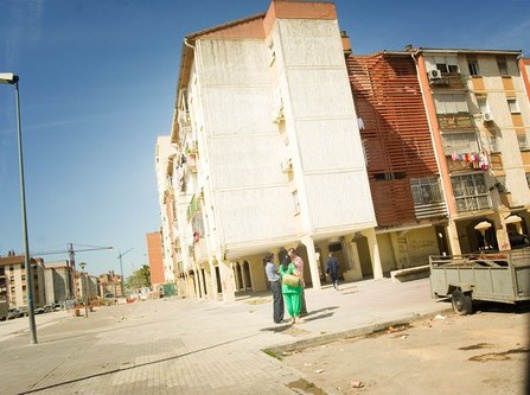 Piles of rubbish litter the pavements whilst plastic chairs stand in front of doors. A few trees are adapted into makeshift clothes-lines from which colourful washing flutters. Voluminous women in robes gossip in front of the entrances to the last improvised sheds made from hoardings – defying the bulldozer already waiting around the next corner. In line with a new redevelopment project, illegal constructions are being demolished. If all else fails, then just build on the pavement!

Since 2003 the town has had an ‘integral plan’ – a new formula to help it adapt to sophisticated urban life. The acting mayor of Seville and councillor for the district, Antonio Rodrigo Torrijos, stresses that the initiative involves civic initiatives on a large scale and over a range of sectors from professional life and town planning to health and education systems.

Although the spirit of improvisation is still discernible, Torrijos proudly explains that it is no longer what it was some five years ago. Contrary to the portrayal of the area in Dominique Abel’s Polígono Sur documentary (in English, “Seville Southside”), which caused such furore, neither donkeys nor goats peer out of living room windows. 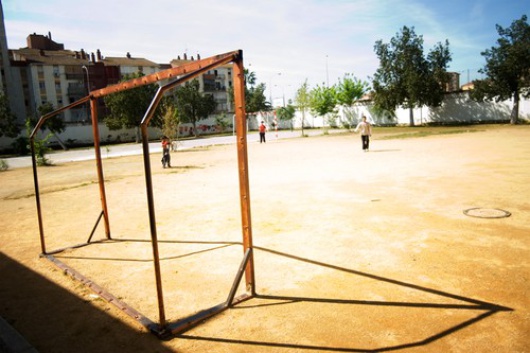 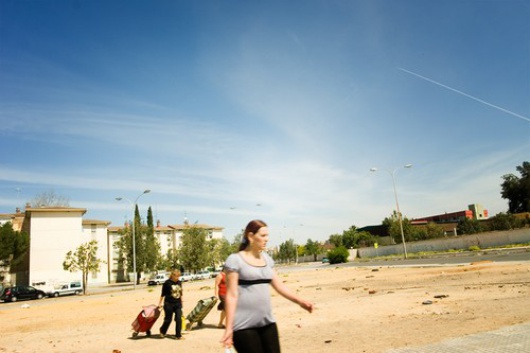 Officially known as Polígono Sur, the Southern Industrial area, it is surrounded by main roads, railway tracks and crane-filled building sites, the first 3000 council flats were built here at the beginning of the 1970s, in order to re-house the caravan and iron hut dwellers from the city centre and surrounding areas into vertical barracks.

Although there are now some 7000 flats housing the area’s 50,000 strong population, the name “3000” has stuck. Some 15% of the population are ethnic Romam and in certain enclaves they make up as much as 58% of the residents. As such a wide range of nationalities, life experiences and views come together social conflict is a distinct possibility. Seville is conscious of its reputation, and so it is time to clean up.

A Remedy for Despair 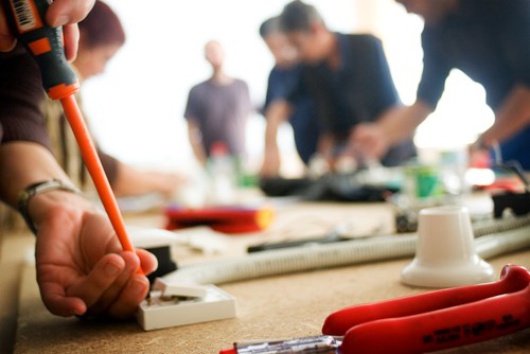 The principle behind the redevelopment is simple: criminality is inextricably linked to social exclusion, and in turn this is linked to poverty, which is linked to unemployment. Juan and Antonio, both around 30 and with noticeable Roma features, have had to get by for years on temporary jobs. Now thanks to the establishment of three training centres, they are now both students of “Taller de Empleo Polígono Sur” and are busy screwing bulbs and cables together to create a circuit. Likewise Sarah, 35, wants to become an electrician and thanks to such initiatives, she is better able to balance the competing concerns of stability and emancipation.

To transform the barrenness of the district, construction projects adding colour, courtyards and play areas, will clearly be necessary. The architect behind the SURCO development, Marina Lagos, has talked to the residents and discovered that security is a major priority and that in any new development bars on the windows are a must. This is to be supplemented by a pair of policemen on every street corner. On the main drag, the sight of slim, sun-tanned boys leaning with their arms on their car boot, waiting patiently to be searched is a common sight as the police stop one car after another.

The drug trade in Barrio Tres Mil is flourishing, because as Torrijos says,“there are customers“ – and, “amongst these are the noblest names of high society”. This fact, also gets to 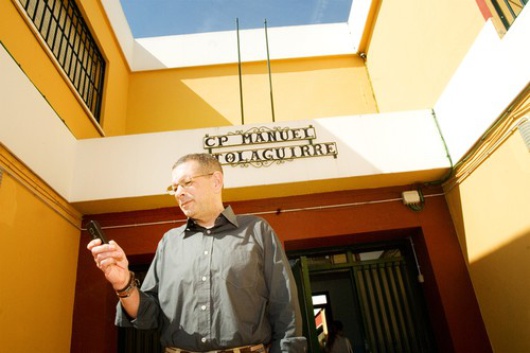 – the rector of the Manuel Altolaguirre primary school. A former pupil recently told him, “i’ve just come out of prison. I was sent down for five years” then added, in a throwaway manner, “by the way, my cousin is dead. He didn’t survive an overdose”.

Women and children are ubiquitous on the streets. A few of them have scabies. New courses have been set up to help get across to the former the fundamentals of personal hygiene, whilst for children there are breakfast lessons before class. Equally there is an emphasis on ensuring that meals are eaten as a group, to help combat neglect. Although there is usually enough money for food, insights into the importance of regular nourishment are sorely lacking.

Not all of Polígono Sur has run to seed. Most of it, Torrijos emphasises, is “respectable”, and is keen to integrate. He wants all of capitalism’s disadvantaged to share its advantages, although as a dyed in the wool communist he recognises the “mendacity” of the current social system – regardless of the fact that his secretary drives an official silver-grey Mercedes. 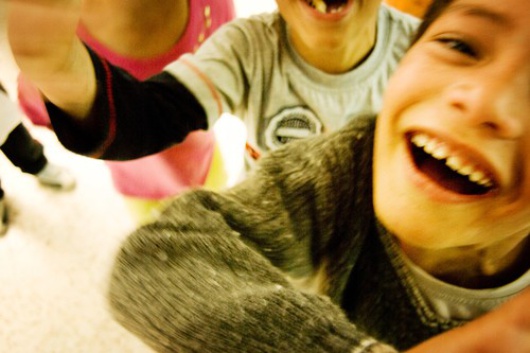 So what of the “integral plan”? José Carlos, whose pupils come from ‘Las Vegas’, the most socially deprived part of the area, lets out a cynical laugh. “The theme has come into fashion, but we are still teaching in exactly the same way as 20 years ago: don’t fight [each other] and make sure that you use the toilet”. Often there is neither a toilet nor a bath at home, as the father of the uncle has sold them to make some money – along with the zinc pipes, the lift and the banisters. Fragments of songs about gypsies spring to mind, but these are quickly suppressed for fear of coming across as racist. However, the gypsies are racist themselves. Maria Carmen López Camacho, 24, a teacher in Las Vegas laughs, “they call us non-gypsies ‘payo’ – idiot”. Despite the challenging environment, she courageously says that she would not work anywhere else in the world. 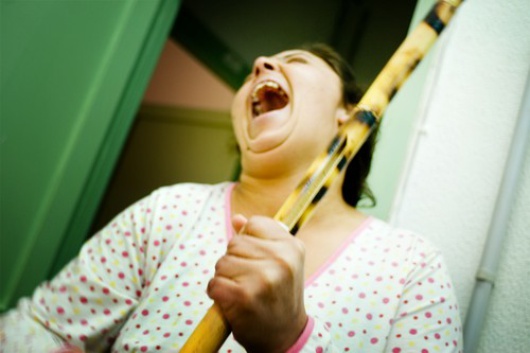 In spite of everything, the affection felt by the 14-strong team of teachers from Altolaguirre – none of whom are Roma – is plain to see. A pat on the back for fat Francisco; a bravo for three year old Moi after he dances flamenco with his arms for a few beats whilst an armful of children want photos and besitos (kisses). In the hallway a loud, “mum, what do you want?” rings out. A mother is bringing her daughter the key that she left behind, wearing pyjamas and slippers. The rector, José Carlos, gives her a “Palo” – an instrument made from a bamboo pipe – because he knows that “she is an artist” and in turn she contributes a few fiery rhythms with a huge golden-toothed smile.