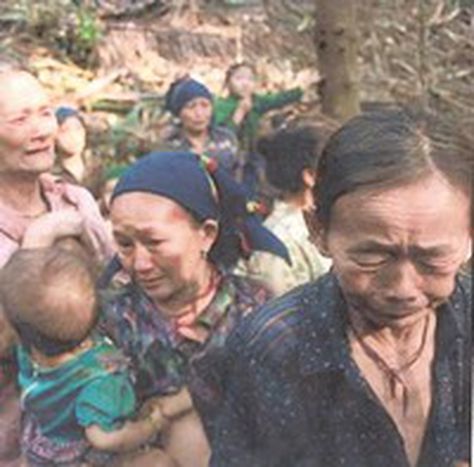 Alak, Hmong, Khmer, Mon, Mlabri, Katu are the names of a few of the dozens of indigenous peoples who live in the mountains of Laos. They are names which should be remembered, as they could be linked to the next European scandal: Laos Gate.

In the mountains of Laos there are no schools, no drinking water and no public services. As it costs the communist government of the capital, Vientiane, too much to move the public services to its citizens, they have decided – in the typical manner of popular democracy – to move its citizens to the services. There is talk of ‘unification of villages’, ‘re-distribution, and ‘population cohesion’. In reality this consists of genuine deportations to the detriment of the numerous indigenous peoples who according to the journal Indigenous Affairs, amount to 70 percent of the population. They are culturally different peoples to the ethnic Laos who control the communist government of this South-East Asian country, caught between China, Vietnam, Cambodia, Thailand and Burma. From 2001 to today, 59,947 people have been deported from their villages. Another 151,178 people should be deported between 2006 and 2010 as reported by the German NGO Society for Threatened Peoples.

As everyone knows, helping the poorest populations and improving the living conditions of indigenous peoples is one of the objectives of the European Union throughout the world. And so a ‘policy paper’ published in 2004 by a manager at the European Commission in Vientiane, Sandro Cerrato, dug out by the Euro-Parliamentarian Marco Panella – taking note of health conditions, problems of malnutrition and ‘cultural breakdown’, brought on by deportation – concludes that “a bigger investment into resources for the planning and implementation of the redistribution of villages could significantly alleviate the difficulties of the transition process.” In other words, if we cannot ban deportation, we should help them to make deportation better!

And so the good intentions of Vientiane (and Brussels) pave, day after day, the way which leads to the hell of the indigenous peoples of Laos. From 2001 up until today, the mortality rate of the deported peoples has risen vertiginously, while dozens of indigenous cultures, linked to places and ancestral traditions and now lost forever, are in danger. The humanitarian office of the EU (ECHO) and the World Food Program are intervening greatly in response to new humanitarian emergencies.

Its views on this matter and have not cleared up many murky points which could lead to ‘Laos Gate’. How far will the care of the EU go towards helping Laos ? What type of ‘rural development’ is Europe helping to construct? How far will the Commission help the communist authorities of Laos to ‘improve’ the living conditions of the mountain peoples? The people best qualified to answer these questions are those few thousands of indigenous peoples surviving in the mountains of Laos, despite our good intentions.