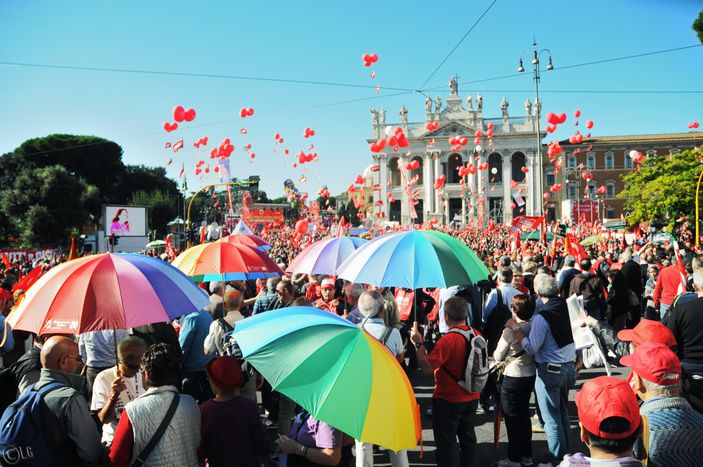 At the festival, of Greek political party SYRIZA, on the occasion of our report in Athens, we came across an unexpected encounter. An interview with FIOM (Federation of Metallurgy Employees) General Secretary Maurizio Landini, who discussed work, the left and a labour union created by a new European perspective.

In Italy at the start of what was announced to be a hot autumn, the days are frantic and at times schizophrenic. After clashes with outgoing Commission President Barroso and tense discussions at the latest European Council Summit in Brussels, Matteo Renzi returned home to attend his first "Leopold in government”, the fifth edition of the ritual festival that catapulted him from Florence to the top of Italian and European politics and a metaphor for his dazzling communication revolution. The other side of the coin is the general demonstration called by the Confederation of Italian Trade Unions (CGIL) in Rome and led by the tandem Camusso-Landini against the government's economic policy and the highly contested Jobs Act. In Piazza San Giovanni, the Italian trade union seems to have forgotten its difficulties and rediscovered its role thanks to the great turnout and to even a part of the Democratic Party, represented by Civati​​, Cuperlo, Epifani, Bindi, Fassina and Damiano, demonstrating against the government's choices and ultimately itself.

It is the General Secretary of FIOM (Federation of Metallurgy Employees) whom we met a few weeks ago at the National Day of SYRIZA at the University Campus in Athens, just before meeting the host Alexis Tsipras, and another great protagonist on the rise of European politics, Pablo Inglesias, leader of the new Spanish political party Podemos. It was an unprecedented and unrepeatable opportunity to ask a few questions.

CB: It appears that the time has finally arrived for the issue of work to strongly enter the government’s political agenda. But for now we are talking a lot about Article 18. Do you think that this is the real problem regarding work in Italy?

ML: I think the issue of Article 18, i.e. the possibility for firms to fire people, is a very significant setback in terms of workers' rights. At a time when the government decides to take this road, means also choosing to launch a very strong social conflict. However, I believe that behind this idea there is a much more complex plan, that is, the attempt to use this crisis to bring about a profound change in the relations systems with the labour market, and this is demonstrated by the cancellation of national and collective bargaining.

ML: This option represents the will to stand on the side of businesses and the market. This will lead to lower wages, greater ease of dismissal and, above all, on the political level, to a representation of the company as a general value at the expense of labour. This is what I feel the Renzi government is forcefully choosing to do. However, I think the CGIL’s decision to organise a national demonstration (on 25 October in Piazza San Giovanni in Roma) is a very important choice, as it offers a unified front for the workers’ demands.

CB: In general, what are the issues that should be seriously addressed?

ML: Now I think that the problem is to consider an alternative social project and bring about change, compared to what the government is proposing. Right now the task of the labour union, and of Fiom and CGIL, should not simply be to express their opposition to, or to oppose such a plan, but also to propose an alternative plan that, stems from work and from the extension of workers’ rights, through a new social and production model, and fight for true social justice, to be able to build a mass movement to change these government policies. I hope it will launch an internal struggle within a European dimension and it seems to me that this is the ground on which we can contribute in order to construct a different Europe. What will happen after that I do not know. Everything will depend on what we can do and the level of consensus that we will be able to build, so it is in essence a gamble. 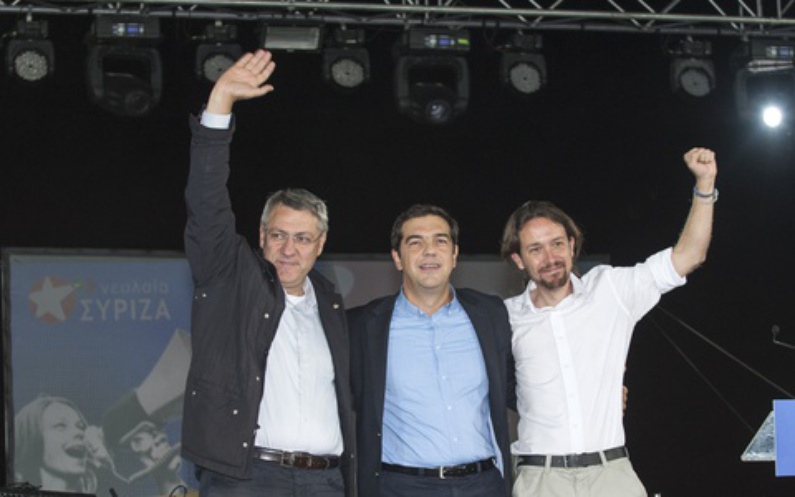 CB: As regards the European dimension... How does it feel to be in Athens, the city where the concept of res publica, democracy and political participation were born, and join an emerging political party like SYRIZA?

ML: It’s a very nice feeling. In a moment of crisis of democracy in Europe and the unprecedented concentration of power in the hands of finance, to see that you can change things and objectively re-start is a positive feeling that offers the impetus to continue to fight in your own country and broaden this struggle. At the same time, this indicates that the dimension of these movements is now no longer only a national dynamic. Everyone is required to become aware of the need to change their mindset and to have a general and global dimension in the activities and processes that are in place.

CB: In this regard, which were up to now your relationships and points of proximity with SYRIZA and the Greek world of work?

ML: To be honest it was very limited and sporadic, partly because there have not been many concrete opportunities. As the FIOM labour union, we had dealings with Greek dockers and delegations have come to our events, but in the process of constructing a joint initiative there have not been many so far. However, the need to create an initiative for a European labour union becomes all the more necessary, because the problems are common, both the political and social ones. Insecurity, lower wages, the overcoming of collective bargaining, are issues with which we are confronted in Italy, as well as in Spain, in Greece or in France. Therefore, on the political level there is a need for new thinking that is able to deal with these processes, representing labour and social justice. This also poses a problem for the labour union. There is a need for the creation of a true European labour union that is not just a sum of acronyms, but which in fact constitutes a project and a joint action, because what we have today is very weak.

CB: Do you think the time is ripe and that now the conditions exist to create such a project as complex as what you just described?

ML: I do not know if it is ripe or not, but we must do it, because the level of social inequality is high and the demand for democracy and participation is very strong, and also because we are facing the prevalence of financial oligarchy as an idea that in recent years has dominated and still dominates in Europe. The somewhat liberalist idea of the absolute centrality of the money market, regardless of social processes, is leading to great contradictions. Then again, I do not know if the time is ripe for a change,  but because the people are fully aware of what is happening, I believe that processes of this nature can fight and change only if there is a maturing democracy, and a social struggle that must have a European dimension. It is worth fighting for this perspective.

CB: Here in Greece, it really seems that the winds of change to the left are beginning to take force, as evidenced by the great election result of SYRIZA. Why is there no political left in Italy that can realistically aspire to the same result using the same content and the same slogans as those utilised by Tsipras?

ML: In fact, this is the first time I am visiting Greece and I was also curious to see and understand what is going on. There is no doubt that after attending the festival tonight, I am impressed by the size of the mass following of a political force such as SYRIZA. Objectively, both in terms of participation and at discussion levels, it is seriously nominating itself as a political entity in position to win the elections, and enter the government in an attempt to change Greece and launch a serious struggle in Europe. In Italy, the political and social processes have led to other opportunities, because at this stage the new policies are Renzi on one side and Grillo on the other, while Berlusconi continues to exist. This must be a reflection of all the forces registered on the left. Perhaps for this, there would be a need for change and a different political process.

ML: On the social and labour union level, I think there is a need to put in place a real fight against insecurity and the FIOM must continue to fight even more than before on this perspective, with an idea of ​​democratization at large and unification of the world of work as its guide.

Interview conducted on 5 October at the SYRIZA national festival in Athens.