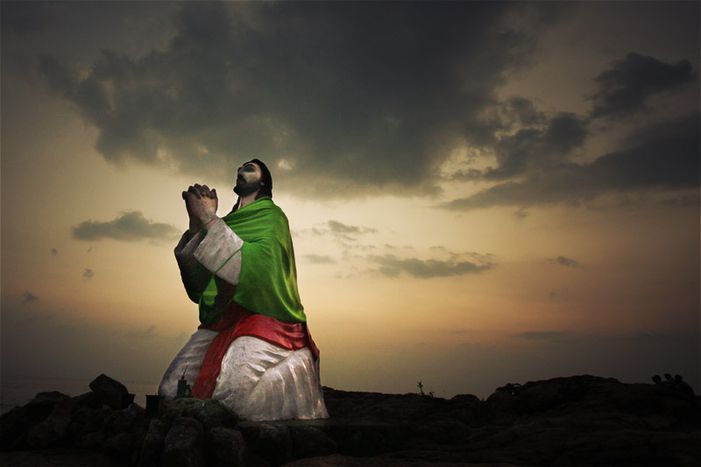 When Victor Hugo declared 'Let the nation be inspired by a love of national architecture', he implied a clear link between national pride and construction with which some would still have sympathy. This has certainly been the case for the last twenty years in the countries which have emerged from the former Yugoslavia

As one state became seven states, each country of the former Yugoslavia has naturally developed a sense of national identity clearly distinct from that of their neighbours. But nation building can sometimes involve confrontation. At a time when the EU is being undermined by populist movements, the plans on show symbolise each state’s clear desire to break away, somewhat violently, from their neighbours. They may be linked by the same 'love of national architecture', but the plans have different origins and implications. Religious, historical and literary references put the conflicts of old back on the agenda. A closer look at two projects which combine history and religion.

On the idyllic Dalmatian coast, you'll find crystal clear water, beautiful beaches, unspoiled nature, and the son of God. 'I want a Jesus bigger than the one in Rio,' declared Željko Kerum, the controversial mayor of Split, who announced an initiative to construct the world's biggest statue of Jesus in 2010. If built as proposed on the Marjan hill where Tito’s name was once spelled out, the 39-metre tall statue would be two metres higher than the 'Christ of the Pacific' in Lima in Peru (the world's current biggest is in Swiebodzin, western Poland - ed). It's not the first time that the entrepeneur has displayed monumental ambition. Several years ago he proposed the construction of a statue in honour of Franjo Tudman, Croatia's first president, and architect of the country's independence.

Perhaps it's not that strange a move: leaving the mayor of Split's provocative behaviour aside, tourism is one of the region's main economic drivers. The creation of a new tourist attraction, following in the steps of O Cristo Redentor in Rio de Janeiro can't hurt. Let's not forget that this part of the country, adjoining both Bosnia and Herzegovina and Montenegro, was devastated by the war of independence (1991-95), with the coastal cities bearing the brunt of Serbian bombardments. The Croatians haven't forgotten the past, and some continue to promote fairly strong nationalist sentiments. So the idea of constructing a giant figure of Jesus, the symbol of catholic christianity, can be seen as a challenge to the country's eastern neighbours: Bosnia and Herzegovina, a multi-faith state, and Serbia and Montenegro, largely orthodox christian states.

Religion has of course played a role both in building national identity and in the liberation of the Balkan states. The struggle for independence in the Balkans was inspired by the church in order to fight the Ottomans. One particularly striking incident served to accelerate the process in more recent times, when on 24 June 1981 the Virgin Mary suddenly appeared at Medjugorje, in western Bosnia and Herzegovina. Wishful thinking or not, the 'Gospa' ('Virgin' in Croatian) was soon used as a symbol by the country's nationalist leaders. The apparition was seen by many as the proof that Bosnia was a holy catholic country.

Kusturica and the Drina

Across the border, film director Emir Kusturica wants to put the Bosnian town of Visegrad on the map. This small town is mainly famous as the setting of The Bridge on the Drina, the novel which won the late Serbian author Ivo Andric (a native of what today is Bosnia) the nobel prize for literature in 1961. It’s been mainly known only to local people – until now. Kusturica’s new project is to create a Balkan Disneyland in Visegrad. It is a well-intentioned idea, perhaps, but one which has been much criticised for his alleged glorification of the Serbian nation.

The town is not only the setting for Ivo Andric's novel, but also the birthplace of Mehmed-paša Sokolovic. How better to evoke 'Serbness' than to build a tourist attraction glorifying the Serbian nation on the soil where one of the greatest Ottoman Grand Viziers was raised? Symbolically, work on the project started on 28 June 2011, the day of Vivodan, a Serbian national holiday which commemorates the battle of the Serb prince Lazare against the Turks in 1389, at Kosovo Polje (the Field of Blackbirds). To ram the point home, on 28 June 2012, Kusturica unveiled the first part of Andricgrad, his final name for the project. It's not hard to see the creeping nationalism behind these two projects. At a time when the majority of Balkan states aspire to join the EU, these plans, promoted by well-known and influential people, symbolise religious difference and ancient conflicts, and stand in complete opposition to the origins of the European project. It's a fine paradox.