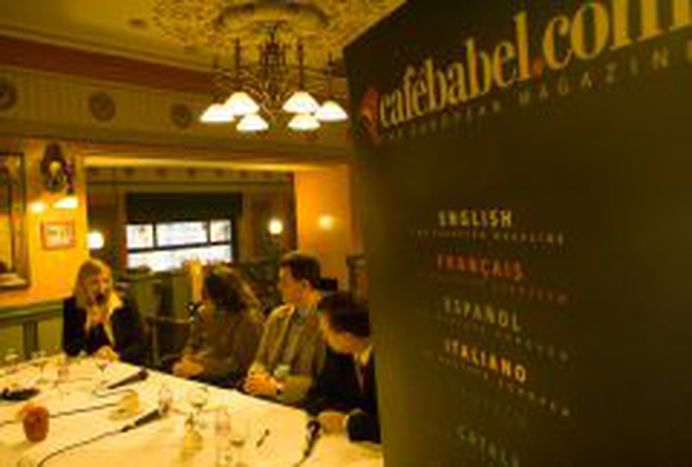 Kosovo’s unilaterally declared independence on 17th March 2008 served as an apropos for the Budapest team of Cafebabel to organise one month later the “Europe on the Ground” debate in Budapest, in the chic yet cosy Central Café.

Our guests were Tamás Lattman, international lawyer, József Makai, journalist from the journal “Magyar Nemzet” and Balázs Vizi minority specialist from the Hungarian Academy of Science. The debate was moderated by Veronika Kovács, member of the Budapest team.

The Centrál was once more fully packed with those interested in our debate on Kosovo in the framework of the „Europe on the Ground” series of Cafebabel. We had the honour to host some of the Paris and Barcelona crew members as well, who has recetly published couple of articles in the magazine on hot debated issues Budapest people talk about. During the stimulating discussion it turned out that the Kosovo situation is much more complicated than it could have thought to be. 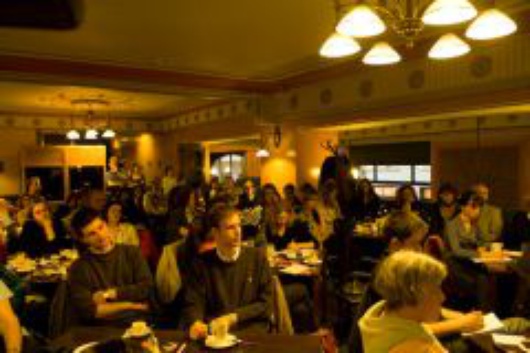 The independence claims of Kosovars are not new, however, the latest harsh movement started after the collapse of Tito’s Yugoslavia, and it really became intense after the ethnic cleansings during the Milosevic regime – said Vizi. Also the dissatisfaction with the international administration contributed significantly to the worsening of the situation. Although the people of Kosovo believed that the situation of the territory would be consolidated under UN presence, in fact it did not help a lot.

Though international law is his field of profession, nevertheless Lattman emphasised that in the “real world” it is not evidently international law norms, which determine whether a country can qualify for the status of independent state or not. Although Kosovo has the majority of these attributes, nonetheless, it is still not obvious that it is an independent state as it has been established on the territory of an already existing sovereign state and this is something unprecedented in the history of international law. The right of Kosovo to declare independence should not, however, be denied a priori as international law is constantly evolving and changing discipline. Thus the arguments are, from a legal point of view, well balanced, therefore probably international politics should decide at the end.

Makai called Kosovo a „major own goal”. He argued that the current situation does not serve the interest of anyone involved. The newborn state has not been recognised by many, and that for sure, is a huge disappointment for the Kosovars. The situation is undoubtedly bad for the Serbs as they lost a part of their territory yet again; it is bad for Albania who really wants to break out of isolation with the help of the UN, but cannot do so as long as Russia keeps threatening with using its right to veto every time. It is quite appalling for the EU as well, because instead of the consolidation of the situation, the instability on the Balkans has without a doubt increased. Last but not least it is bad for the Hungarians living in Voivodina as, with the depart of Kosovo, Hungarians will be the biggest minority in Serbia and the possible scapegoat for the frustrated Serb society. 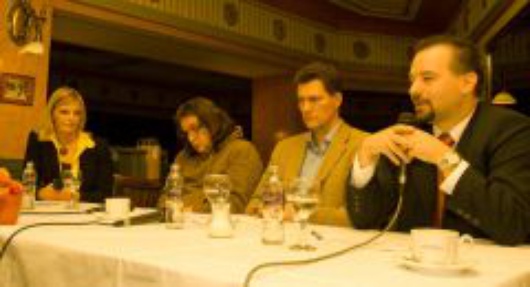 The Hungarian government has committed a big communication mistake when it recognised Kosovo – claimed Makai. Although, the Hungarians of Voivodina asked not to make reference to their interests when recognising the new State in order not to deteriorate their already charged relations with the Serb majority, the government did not listen to them. He also pointed out that the timing and that the recognition happened on the same day with Croatia was a good choice.

If anybody is able to profit from the situation, it is Russia – submits Lattman, who finds it still a bit exaggerated to talk about a new Cold War conflict in connection with Kosovo. It is nevertheless true that Russian diplomacy seems to work on the restoration of the superpower image torn after the fall of the Soviet Union and Kosovo is the practice field for that. Russia was aiming to drive a wedge between the USA and the EU, to destabilise the relationship that seemed for a long time very solid, and they did so with some success if we look at the Kosovo case.

However, it would be false to believe that Russia wants to „dominate” or isolate Serbia – adds Makai – as it is much more in the Russian interest to have a strong ally within the EU than just another servile State. On the one hand, the European perspective is appealing for Serbia and the Serb society, tired from fighting and loosing wars, is somewhat reluctant to fight again for Kosovo. If this is the price to pay to get accepted in the EU, then be it – they say. On the other hand the EU can also profit from a stable and prospering Serbia as this is the key to stabilise the whole region. Nevertheless, it is still an ongoing debate where and how should Serbia join the Union – Vizi reminded us.

Is Kosovo a precedent for other ethnic minorities in other countries as well? All minorities are concerned in one way or another – answers Lattman yet many say that it is not a precedent. That is a non-sense from a legal point of view, it is only a political bonmot, not to hurt certain groups so much. It can be seen that Russia acts already according to the Kosovo “receipt” in connection to the Caucasian countries. Yet Kosovo is not a precedent in the sense that there are other States which are States without the consent of the international community, like the Turkish Republic of Northern Cyprus. 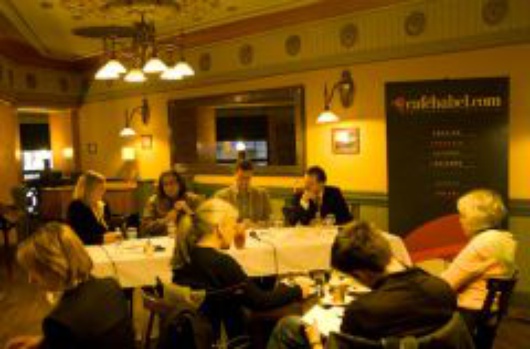 As the debate went on, other minorities in Europe came to the focus. Talking about the Basque country, our Spanish guests told us that the political and economic situation of Spain was a lot different from that of Serbia. These factors are extremely important in this context as the vast majority of the Basques are content with their lives, and their autonomous status within Spain wholly satisfies them.

We should not expect that, even after Kosovo, a large number of national or ethnic minorities would try to split from the State they are living in – assumed Vizi. Many believed that the wide range of minority rights to be given to the Serbs living in Kosovo would serve as a model for other minorities, but the new constitution of Kosovo does not mention any such right. Why Kosovo? As Makai puts it: first, there is an ethnical conflict in the region between Albanians and Serbs since the beginning of the XXth century and secondly, after the relative calm of the Tito regime and the 1974 Yugoslavian constitution that guaranteed autonomous rights for Albanians, a new generation of Kosovars has grown who are ready to literally die for freedom. The ethnic aggression during the Milosevic era and the pro-Kosovo politics of the USA did not but accelerate the process. 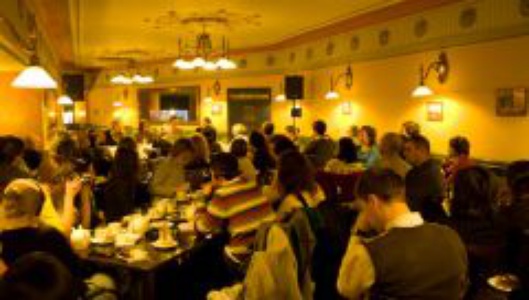 Talking about the current situation in Kosovo, our guests all agreed that Kosovo was really instable and there is always a danger of an armed conflict to burst out between the various clans governing the different regions of the country. The fragile political situation predicts that Kosovo is not an economic stronghold either, though a country of a similar size could be viable. The only way out for Kosovo is the European perspective, concluded Lattman, to gain membership in the Council of Europe and later in the European Union as well.

The risk of the establishment of Great Albania is quite low – replied Vizi to a question. He added that Kosovars and Albanians never lived in the same country; they therefore did not develop a feeling of belonging together or any kind of Pan-Albanian identity. Kosovars do not see Albania as the “motherland”. Lattman further elaborated on the question and told that actually the establishment of Great Kosovo was more likely, as Kosovo is still in a better position economically than Albania, they just declared independence, hence their confidence is also higher.

The future of Kosovo largely depends on how much can Serbia and Serbians tolerate the loss of their former province – suggests Makai. It is highly likely that Serbians, after all, have to accept Kosovo’s independence, what else can they do? They could protest, trust in Russia or their radicals, no matter what they do, Kosovo will probably not be part of a unified Serbia for a while. (It is worth noting however, that after the elections in May, the radicals who do not want to let Kosovo go became one of the biggest parliamentary blocks in the country.) Lattman also listed the possibility for Serbia to launch a lawsuit against those States that had recognised the independence of Kosovo, thereby causing Serbia serious damage.

As a conclusion to the debate, everybody agreed that the Kosovo file cannot be closed as yet; the situation of a State which declares independece unilaterally is a matter of a thorough analysis, taking into account the reaction of the biggest powers, the steps taken by the EU, the Serbian domestic politics and the opinion of the international community amongst other factors.