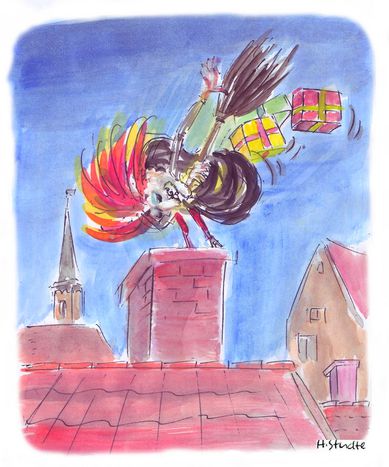 Knecht Ruprecht and his motley crew of Christmas meanies

‘And is that cane there by your side?’

‘The cane’s there too,’ I did reply. ‘But only for those, those naughty ones, Who have it applied to their backsides.’

This is how the christ child in Theodor Storm’s poem Knecht Ruprecht ('Farmhand' or 'Servant' Ruprecht) quotes his eponymous christmas helper, surely Europe’s cruellest christmas horror figure. According to late medieval tradition, it’s not only St Nicholas who comes on 6 December to fill children’s polished-up boots with gifts. No, he also has his buddy Ruprecht in tow, his negative alter ego, who is there to drum good behaviour into the little ones - with a good beating if necessary. Well, we wouldn’t want them to turn into spoilt brats…

Ruprecht has colleagues pitching in in neighbouring countries: there’s Hans Trapp in Alsace, Zwarze Piet in Holland ('Black Peter'), and the particularly hardcore Père Fouettard ('Daddy Whip') in north-eastern France. Just to add to his menacing image, Knecht Ruprecht – in his various incarnations – is often associated with the colour black. In Belgium and Holland he is depicted as a black slave in colourful clothes. This might also be why he is known under the name Schmutzli (‘Sootyman’) in Switzerland, where he gives out coal and sugar beets instead of sweets.

In catholic-central Europe, for example Austria, Hungary and the Czech Republic, it’s Krampus you have to look out for – a heathen-horned devil man who won’t hesitate to round naughty children up and carry them away in a sack on his back. Pay special attention, he likes to hang out in crowds. Traditional processions still take place in different towns, in which masked Krampus figures move through the streets.

While St Nicholas has had to cede his place to the ‘christ child’, especially in protestant areas of Europe, his creepy helper has clung on in imaginations with a stubborn survival instinct. Only the catholic south has been spared the rod. But that’s because other gruesome characters have been around there since before christian times. The Italians have Befana, an ugly old hag with a broom as her partner in crime. Under fascism, in the name of ‘romanisation’, she tried to clean up her image by reinventing herself as a white witch who showered children with presents. But she still plays Ruprecht’s old coal trick on cheeky youngsters, even today. In many ways she’s the latecomer among the continent’s Christmas meanies: Befana comes down the chimney a month later than everyone else, on Twelfth Night, 6 January.

First published on cafebabel.de on 2 December 2009