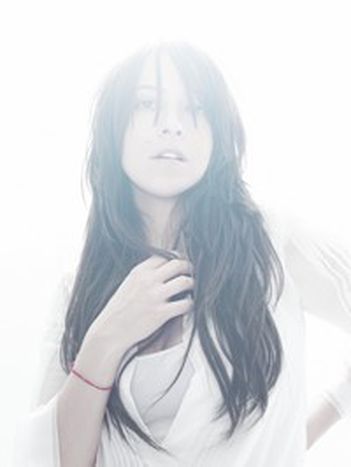 Keren Ann: ‘You take something from everything’

The French singer of Dutch origin, 33, was born in Caesarea, Israel. She lived in the Netherlands until the age of 11 and sings in English. Now, she moves between Iceland, France and New York

'Paris of Liberty since 1877'. The antique inscription adorns an atypical building in the heart of Belleville, one of the last working-class neighbourhoods in the French capital: a huge warehouse, winter garden, movie theatre and concert hall all in one. The first co-operative in Paris, the 'Bellevilloise' has today become and alternative, cultural venue. It is huge but warm, and it is here that I meet Miss Keren Ann.

The concert hall, a basement worthy of a mechanic's garage, is still empty except for a few technicians. I walk through the maze of pillars, which give way, revealing the face of the singer. I arrive while they are adjusting the levels, it's a strange sort of ballet. Keren points to her mouth then the ceiling, to her guitar then the floor, to one of her musician's Bass and to the floor once again. ‘A bit more guitar, Philippe!’ Philippe makes a suggestion. ‘Okay!’ The accent is American.

Later, on a terrace, we begin to talk whilst she sips her beer. ‘I've passed my vodka stage. I’m now at my whisky stage. But right now, I want a beer.’ Mischievous and contradictory. Just as in her music, Keren Ann hides her enthusiasm and excitement beneath her nonchalant outward appearance. Often, her music is described as nostalgic - does that come from her travels? ‘Nostalgia, melancholy, they've got nothing to do with moving around. Maybe at the moment of departure there is a little sadness, but arriving somewhere makes up for it. Melancholy is anchored in me.’

I ask her how she presents herself to a European public. She brushes the question to one side with a sweep of her hand. ‘I have nothing to say about myself, after all I'm not very interesting. Instead, I suggest you listen to my music - that's what's interesting.’

And it’s true; her music is interesting. Celebrated by French critics and by the website www.lesinrocks.com, Keren Ann is a key figure in the new scène hexagonale in France. She emerged from obscurity in 2000. Along with partner Benjamin Biolay, she relaunched the career of veteran singer Henry Salvador in 2000, co-writing and composing the melodies for his new album, Chambre avec vue (‘Room with a View’), which won two ‘Victoires de la musique' the next year.

In less than two years, she then recorded two intimate and delicate albums, in the tradition of Jane Birkin and Françoise Hardy: La Biographie de Luka Philipsen (‘The Biography of Luka Philipsen’), and then La Disparition (‘The Disappearance). Even so, she refuses to be catalogued among the ambassadors of the French New Wave. ‘I write in the language of the emotion. If it comes to me in French, I write in French. Most of the time, I think and feel in English. It's my first language, I didn't speak a word of French until I was eleven years old.’

In New York, where she lived for four years, she made a new album, Nolita. 'Nolita', for north of Little Italy but also 'No Lolita'. Not a coincidence. 'Don't say anything, I'll speak for two,’ goes one of the songs from her latest album. And it's true, she likes to talk. With a Russian grandfather, French-speaking Israeli father, and on her mother's side, daughter of a Javanese woman and a Dutch officer. She advocates multilingualism and the importance of constant intellectual stimulation.

She then goes on to tell me that she likes to read books as much as possible in the original language. She gives Hebrew, English and French as examples. I ask her which language she dreams in. ‘I don't believe that you dream in languages, it's a myth. I dream in emotions. I have dreams in languages I don't even speak.’

Melting-pot made flesh, from everywhere and nowhere, where does she feel at home? ‘Where I am. That's where home is. I take my house with me. I'm a real snail in that sense. Being disorientated is part of my personality, and when you're a musician, it's normal to travel. Of course, there are downsides - jetlag, for example, is a pain. But it's a lifestyle choice. I'm not going to complain about it.’

She tells me about the four years she spent in New York, or more accurately, the four years in which New York was her base in the United States. I ask her which she prefers, the American road-trip or travelling through Europe. ‘You take something from everything. Everywhere has its own riches, it's important to open yourself to them. Travelling is above all an attitude, a way of accepting new things. If I'm in New York, I feel like I'm in that city, not in the United States. If I play in a place in Texas, I feel as though I'm in Texas. The same goes for Europe, it isn't all the same for me. There, I feel as if I'm in France, and I know that Italy is different. If I went to Sweden tomorrow, I would feel the identity of that country.’ A singer-traveller who loves above all else, the idea that our differences can unite us.’